Five Novels Every Conservative Must Read 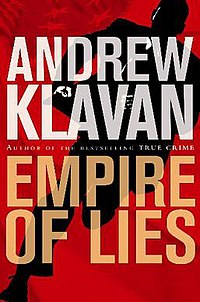 Well, it’s a good day when I get on a list with George Orwell and Brad Thor and that happened in Zachary Leeman’s Lifezette piece Five Articles Every Conservative Needs to Read. Animal Farm, Thor’s Hidden Order, Ayn Rand’s Atlas Shrugged and Stephen Hunter’s Point of Impact are rounded out by my own Empire of Lies:

If readers didn’t know novelist Klavan was a conservative before “Empire of Lies,” they certainly knew afterward. Klavan’s novel follows a conservative Christian named Jason Harrow who discovers the media and left-wing groups may be concealing the details to an Islamist terrorist plot.

The novel certainly didn’t earn Klavan many friends in the mainstream media. “Klavan occupies the portion of the political spectrum commonly known as right-wing crackpot,” said the Associated Press of Klavan’s novel. “Through Harrow he tells us, among other things, that the entire media is a left-wing conspiracy, that taxes steal from the rich to give to the poor, that America is in a holy war with Islam, that the truth about darned near everything in the United States is obscured by a blizzard of politically correct lies and that anyone who disagrees with him is deluded.”

Klavan’s thriller was peppered with conservative messages and clicked with readers — it became a best-seller. It’s a wonderful read and the type of thriller every conservative should own, as it hits on truths about the media, the government, and political correctness that unfortunately still ring true today.

I confess I feel this is one of my best novels and underrated. You can buy it here.