We Need A "Warrior Culture." 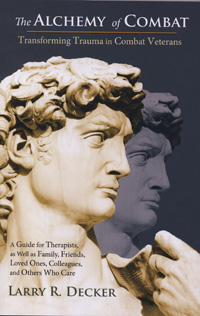 An interview headlined “On The Battlefield of the Psyche” in Psychology Today provides an interesting coda to Memorial Day. The person being interviewed is my wife’s psychologist colleague, Larry Decker, who specializes in treating the mental disorders of veterans and has recently published a book on the subject called The Alchemy of Combat.

I especially liked these remarks:

There is no true warrior culture in America—no preparation or training for soldiers. There’s none of that…  Millions of dollars are spent… on programs that train soldiers to become psychologically resilient, so that they don’t have emotional responses to killing. Basically, this just removes their conscience, as well as a sense of empathy for the enemy. Instead, soldiers are taught that in order to kill they have to dehumanize their enemy. Thus in Vietnam, they were called “gooks,” and in Iraq they became “Hajis” or “sand niggers.” By contrast, the Greeks and other ancient warrior cultures understood the concept of the “honorable enemy,” or “honorable foes…”

As has been well known in the field of psychology, and as I’ve seen in my own clinical experience, the effects of dehumanizing the enemy can lead to serious problems when soldiers return from war; their PTSD symptoms can become very, very severe. Essentially, when veterans attempt to re-enter the civilian world they eventually have to come to grips with the fact that their enemies, whether Vietnamese or Japanese, are human beings—not just “nips” or “gooks.” This realization creates enormous grief over the killing, torture, and mutilation the soldier may have been involved in. He was able to do those things in the war because he had convinced himself that the enemy was not really human. Now how can he forgive himself?

In other words, if I’m reading this right, the truth would set our soldiers free — the truth, I mean, that war will come and men must fight it, on our side as well as the other. Warrior is an honorable profession and should be treated as such.

It’s pretty obvious that we don’t know how to respect our enemies — and it’s not just the name-calling — the “gook” and the “hadji” of it all. In fact, name-calling seems to me an all-too-human part of any hostile situation. But it’s the condescension too. The Obama administration has gormlessly suggested, for instance, that Islamic terrorism is merely a result of the poor economy in the Middle East! This is so incredibly contemptuous and dismissive of our opponents!  It’s as if they weren’t as capable of coming up with, believing in and fighting for a philosophy as we are ourselves. No, they’re only helplessly reacting to circumstances (for which we are mysteriously responsible).

So much better and more honest to say of our enemies: these are grown-up men like our grown-up men. They believe in militant Islam as we (or at least some of us) believe in freedom. In keeping with their philosophy, they want to enslave and/or kill us. They are willing to fight bravely to accomplish their aims and we must fight bravely to stop them. The job is horrific and painful, and so we honor our warriors when they do it.

Rudyard Kipling gave us a taste of this attitude in his tribute to the “Fuzzy-Wuzzy,” the Sudanese warriors who broke the British square while fighting for the Mahdi, a self-proclaimed Islamic messiah:

“We’ve fought with many men acrost the seas,
An’ some of ’em was brave an’ some was not:
The Paythan an’ the Zulu an’ Burmese;
But the Fuzzy was the finest o’ the lot…

So ‘ere’s to you, Fuzzy-Wuzzy, at your ‘ome in the Soudan;
You’re a pore benighted ‘eathen but a first-class fightin’ man…”

This sort of straightforward attitude to an enemy fighter sends the left running to their safe rooms, but in reality it’s far more respectful to the warriors on both sides than some ginned-up undergraduate sociology that masks the hard truth of the situation.

Such bluff, honest respect for the enemy — and by extension for our own warriors — would not be a cure for PTSD but at least it would serve to create an honest place in our society for the men and women who fight to keep us free.