Have A Wonderful Easter

I’m posting this on Good Friday, which for the apostles of Christ was a day of the blackest despair. I imagine many of them were saying the same sorts of things that many of you have been saying since the last election, “It’s done!” “We’re finished!” “It’s over!” “There’s no hope!”

Have a wonderful Easter.

Below is a re-posting of part of my Christmas essay, “Our Culture and Christ.” 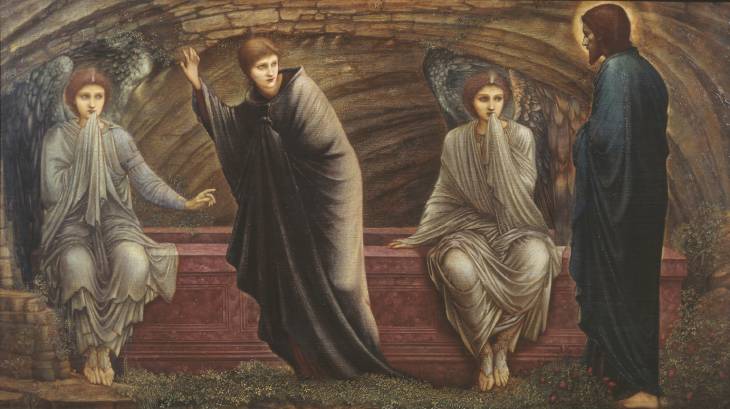 All art — all storytelling, picture-making, music — is an attempt to record and communicate the experience of being human. There are no words for this experience. Only metaphor and imagery and music will do. All peoples leave these traces of themselves. It’s their way of saying not just “We were here,” but “We were here — and this is what it was like.”

In the west, especially in that part of the west formerly known as Christendom, the project of art has taken on a special significance. That significance accounts for western art’s unparalleled greatness, for the fact that European productions between the Renaissance and World War I represent the pinnacle of human cultural achievement thus far. No other painting, literature or music has ever been more beautiful or more deep — more generally successful in doing what it is art does.

The special significance of western art — its special urgency — derives from the fact that westerners have a unique belief that the experience of being human, while by definition subjective, is nonetheless a reflection of an objective truth:  moral truth.  We believe that a human life can embody the ideas of God.

The oldest extant fragment of the canonical New Testament we have is a parchment the size of a cell phone that bears portions of the confrontation between Jesus and Pontius Pilate. During that confrontation, the Jewish preacher tells the Roman procurator that he has come to testify to the Truth and that all who are of the Truth will hear his voice. To this, Pilate responds — derisively, one imagines — “What is Truth?”  Jesus doesn’t answer him here, but he has already given his answer earlier in the same gospel: “I am.” “I am the way, the truth and the life.”

This statement is the fruition of Jewish thought at the very end of the first great cycle of Jewish civilization. The God of the Jews had spoken his name to Moses: I AM THAT I AM. Which is to say that the very fact of being — existence itself — is a person. That person created man in his image. And so, in theory at least, a man might live into that image, might express the personality of his creator and become the immortal moral truth of existence in the flesh. This is who Christ is.

Europe was molded by belief in him. Christianity transformed both the customs of the continent’s German tribes and the classical modes of thought and expression they ultimately inherited. So in Christendom, art’s age-old mission of expressing human experience became also something else, something more: an attempt to paint the human shadow of the great I AM.

Or… not. As the gospel suggests, the outlook of Pilate inevitably remains embodied in the western project.  It is part of the story.  There is the voice that says, “I am the truth” — the Christly voice that says our conscience matters, that we reflect the godhead, that just as there is a starry sky above, there is a moral law within. But there is also the Pilate voice saying, “What is truth?” implying that subjective human experience is forever open to question, that there can be no ultimate morality, that everything we see or seem is but a dream within a dream.

The history of western culture from Hamlet to The Sopranos is the history of minds in the toils of that Christ-Pilate dynamic. Whether it’s Nietzsche standing in for Pilate or it’s Woody Allen, whether it’s Dostoevsky batting for Christ or it’s Tolkien, the question is the same. Is there an ultimate moral reality that guides human life or is it as Hamlet said, and “there is nothing either good or bad but thinking makes it so”?

But while the post-modernist position is absurd and untenable, it’s correct in its premise: you can’t make the argument for moral truth without God. If our conscience matters, it can only be because existence is a person and we are made in that person’s image. It can only be because our lives naturally strive toward Christ.

This underlying knowledge — this inescapable sense of Christ’s reality, toward which we move even through our constant questioning and doubt —  is what makes the stories and music and paintings of the west so uniquely great and beautiful and profound.