A Find for Ghost Movie Fans 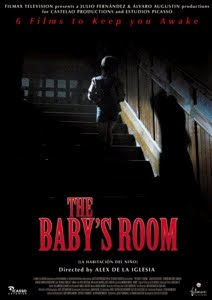 Once again, tirelessly searching through the piles of obscure, unwatched spooky films that litter the floor of my elfin grot, Klavan on the Culture has unearthed a really good ghost story that you — going about your ordinary, humdrum, non-scary-movie-watching lives — might have missed.

If, like me, you enjoy pictures that deliver genuine spookiness instead of gore, shocks and startles, check out the terrific Spanish entry, The Baby’s Room.  If you get Netflix streaming, you can search it there and watch it directly. It comes up as part of a package called “Six Films to Keep You Awake.”

After a generally unnecessary and kind of standard prologue, the film delivers a really frightening premise and then develops it in a clever and original way. I hardly even want to tell you the idea for fear of spoiling it, but to be as vague as possible:  a young couple with a new baby move into a house and weird things start happening in the title location.

The picture has the good sense to remain a little bit fuzzy and mysterious with its explanations. As a result, it’s not all tied in a neat bow at the end and you may have some questions, but you’ll get the idea and it’s a scary one. It’s not a big picture — like The Ring or The Sixth Sense, say. Coming in at under an hour and a half, it’s more along the line of a large Twilight Zone episode. But it’s very satisfying and chilling and with its precise and subtle psychological insights, it sticks with you even after the last creep is crept.

One caveat, since it’s in Spanish with subtitles, you might sometimes miss some of the quicker, more subtle scares, so keep your eyes open.

If you like the spooky stuff but have no use for horror, this is a really good one to check out.