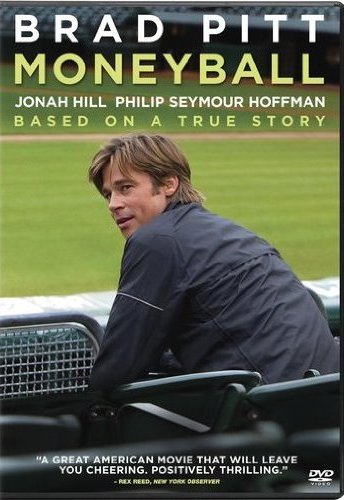 One of the signs of America’s cultural shift out of the revolutionary sixties and seventies was Hollywood’s changeover from offbeat, often ethnic, actors like Dustin Hoffman, Al Pacino, Gene Hackman and Jack Nicholson to almost identical bland, blonde pretty boys like Matt Damon, Brad Pitt and Leonardo DiCaprio. I’ve sometimes wondered if director Martin Scorsese was making an ironic commentary on the trend in The Departed in which the virtually identical Damon and DiCaprio play mirror image cops (with Mark Wahlberg, another ringer, thrown in) who are manipulated by the aging Nicholson.

Not that these cookie cutter blond boys don’t do good work sometimes but, for my money, the only one who has developed into a really top-flight actor is Pitt. Despite the pretty looks and a rather dull, muddy instrument of a voice, he’s not only chosen interesting and challenging roles throughout his career, but he’s managed to inhabit them to the point where you actually forget whether he left Jennifer Aniston for Angelina Jolie or the other way around.

Moneyball is a good example of his work—and a really good film too, based on the nonfiction book by Michael Lewis.  Pitt plays never-was baseball player Billy Beane, who has now become the GM of the underfunded Oakland A’s. The film follows Beane through the 2002 season as he teams up with Yale economist Peter Brand (Jonah Hill) to try to invent a new way of constructing a winning team on the cheap.  The script by Steven Zaillian and Aaron Zorkin is quick, tight and smart. Hill, and Philip Seymour Hoffman as manager Art Howe give great support. And 14-year-old Kerris Dorsey, who plays Beane’s daughter, is a genuine revelation. She steals every scene she’s in.

But it’s Pitt who holds the whole thing together. He plays Beane as a man who is smart but not that smart, sad but not that sad, desperate but not that desperate—it’s not an easy mark to hit and he hits it exactly. It’s not just a wonderfully quiet, self-contained performance, it’s also a modest one without unnecessary flash. As he’s gotten older—and less pretty—Pitt has actually developed more charisma. Like Nicole Kidman in her prime, he can dominate a scene in silence and on the sidelines. You can see what he’s thinking. Whole plot points play out in his eyes. It’s impressive to see.

Not that it matters, but I notice this picture got skunked at the Golden Globes. I didn’t see most of the films that won, but it’s hard for me to imagine they were better than this.  Midnight in Paris, which won best screenplay and which I did see, was another in what seems like an endless series of Woody Allen bagatelles, pleasant enough but so tiny in theme and scope it was barely visible. Moneyball‘s script is far, far superior, not really even in the same category of quality. And as for George Clooney taking best actor…  well, listen, I enjoy watching Clooney.  He’s a fun movie star.  But actor-wise, Pitt is the genuine article and Moneyball is one of his most all-around successful ventures.

It’s now out on DVD and definitely worth your time, even if you’re not a baseball fan.