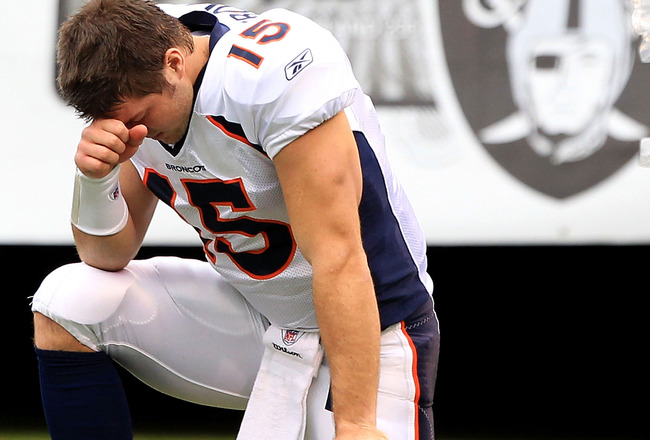 Well, as we head into the weekend, I’m really looking forward to the Broncos-Pats game. When New England ended Denver’s amazing six game winning streak back in December, the always graceful Patriots quarterback Tom Brady shook the hand of Broncos miracle man Tim Tebow and said words to the effect of, “Maybe we’ll meet up again.” It was a kind and gentlemanly thing to say and only Brady knows if he meant it, but here we are and here they are and here we go.

How exciting was last week’s Pittsburgh-Denver matchup?  So exciting that my eyes were glued to the TV and I didn’t pay enough attention to folding up the home gym machine I got for Christmas.  It snapped closed on my fingers. I almost yelled as loudly then as I did twenty minutes later when Tebow threw to Demaryius Thomas for an 80-yard touchdown to win the game in the shortest overtime in NFL history. Broncos on the sidelines who didn’t understand the new overtime rules had to be convinced they’d won. It was a priceless moment.

Win or lose Saturday, Tebow has given us fans one of the most thrilling and off-beat football stories ever this season. Better than any movie that came out last year. Better even than the terrific run at perfection by Green Bay.

One of the most entertaining parts of the whole business for me was the way number 15’s simple and sincere faith in Jesus Christ reduced observing journalists to blithering idiocy. Retired QB great Fran Tarkenton’s rambling op-ed in this week’s Wall Street Journal was not the only venue where someone asked, “Does God Care Who Wins Football Games?” It seemed every time I turned on ESPN or opened the sports pages, someone was asking that question. But why? Tebow never said God cared about that—he expressly said God didn’t. Frankly I think journalists asked that question because they couldn’t bear to ask themselves the more obvious and more dangerous question: Does God care about Tebow’s decency, humility, charity and striving toward excellence? I don’t speak for God but I think deep down we all know the answer to that.

For myself, my peripatetic earlier life caused me to reach maturity without a home team to root for. So while I love the Pats, I’ll be Tebowing for Tebow on Saturday. What a sports hero the guy is. What an inspiration. And really, no matter what happens next, Tebow—and the Broncos—and the NFL—and all of us—have already won big time. And yes, I do believe God cares.