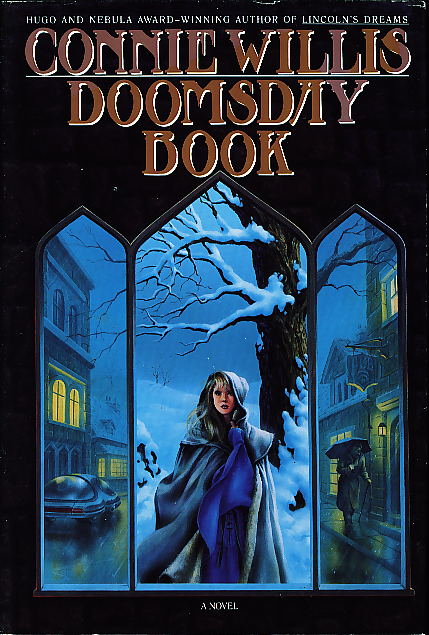 A few weeks ago, I mentioned that I was searching for good fantasy fiction, a genre I generally enjoy on the screen but not on the page. Don’t like guys named Thorbak of EldWorld; can’t stand Big Ideas expressed in terms of hardware; and so on. But after reading and enjoying Neil Gaiman’s Neverwhere, I felt I might like some more stories where a magical or science fiction element intrudes on a world I recognize. Tried Edinburgh Dead with mixed results. Then followed one of those Amazon “if you enjoyed,” threads and came up with Connie Willis’s The Doomsday Book.

What a wonderful novel. Really. Just beautifully done. Written almost twenty years ago now (1992), won both the Hugo and the Nebula awards, and I’d never heard of it before. My bad.

The story: in the Oxford of the future, a female history student goes back in time to the 14th century. There’s more of a plot than that, but why give it away? The writing is simple and powerful, the characters extremely enjoyable, the setting so realistic you can smell it, and the whole thing is such a pleasure it’s like eating cake. (This in spite of the fact I was swamped with work and could only read it in small portions, which can ruin a book.) Willis writes with enormous compassion but precise observation.  She does children, especially, better, I think, than anyone I’ve ever read. Without treating them in either a romantic or reductive way, she captures perfectly how they can be endearing and annoying at exactly the same moment. She also has an uncanny way of presenting a vision of the world that is at once very, very dark and very, very hopeful—sort of like real life. I’m not sure at all but I’m guessing she’s a Christian of some stripe, but if ever a writer managed to write a Christian worldview in a non-vomitous way, it’s she—and other happy-talk Christian writers should take note, and indeed take notes.

Some of the best things about the book are the things Willis doesn’t do. She doesn’t imagine the future in any particular detail or explain time travel very much. She tells you the rules without trying to come up with some elaborate explanation for them—and then on with the characters and the story. It’s a very clean, gripping approach.

Many years ago, I realized with surprise that I don’t really read very many books by women anymore—almost none by American women. I’ll write about the reasons another time when I feel like starting an argument. But I freely and humbly confess that almost everything I like about this novel—the warm compassion, the leisurely and domestic plotting, the lovable characters, the brilliantly done children—is in some sense womanly. So brava for the pure force of talent that overcomes prejudice. In fact, just to show you what kind of guy I am, I won’t even mention the pro-Obama picture on her website. Oops…

But seriously, forgive and forget the Obama tote. The author’s politics in no way intrude on the proceedings here. If you like fiction and you’ve never read this, pick it up. It’s absolutely terrific.