The iPod Is Gone but Not Forgotten, Still in My Car's Center Console

The original iPod was the last perfect consumer electronics device ever produced, and now it’s gone.

On Tuesday, Apple announced that it has discontinued the iPod Touch, the only remaining model of the once-ubiquitous line of MP3 players. When the shelves are depleted of current stocks, that’s it for the iconic device first released on Oct. 23, 2001.

I won’t miss the iPod Touch, last (and barely) updated in 2019. It’s just a stripped-down (in every imaginable way) iPhone with aged features and a high price tag.

I won’t miss my sixth-generation click wheel iPod Classic, either. Purchased new in 2009, I still use it almost every day.

When I say that the iPod was a perfect device, I don’t mean the various iterations Apple produced over the years — the Mini, the Nano, the Shuffle, or the Touch.

I mean the classic click wheel iPod. That device nailed the user experience so well, right from the get-go, that it remained essentially unchanged over six generations and 13 years (2001-2014) of production runs.

(There was one brief exception that I’ll get to in a moment.)

What made the iPod Classic perfect was that it did exactly one thing and did it expertly: Make music — eventually even your entire music library — available to you, anywhere you might be, with the world’s most intuitive interface.

The iPod’s click wheel is a thing of stripped-down beauty, still.

Strum it clockwise to move down a list. Strum it counterclockwise to move up. Click it on top and move up to the next menu. Click left to rewind, right to skip, and at the bottom to play. Subtly audible clicks for each action let you know exactly where you are and what you’re doing, even when you can’t look at the screen. That’s why, even now, my iPod is still my favorite way to play music while driving.

Just don’t ask what I sing along to in the car, alone and with the windows rolled up tight. 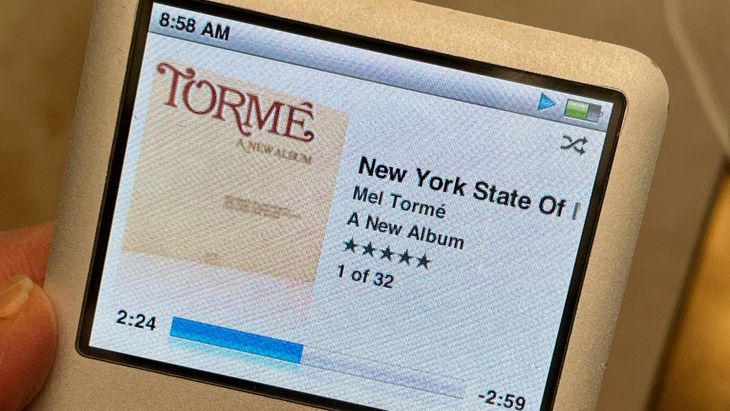 The heavy lifting of managing your music and playlists was delegated to iTunes on your Mac or (from 2005) Windows computer. A small player sucks at chores like building playlists or adding or removing songs — a lesson none of the previous purveyors of inferior MP3 players ever figured out.

For the third generation, Apple experimented with moving the buttons off the wheel and onto a row below the screen. It was a mercifully short-lived experiment. From the fourth generation on, the physically rotating wheel was replaced by a stationary touch-sensitive disc that’s nearly impervious to mechanical failure.

Over the six generations, the screens got bigger and added color, iPods grew slimmer, and the storage jumped from the original five megabytes to a massive 120 or even 160 in the final years.

The bigger screen was nice. The additional storage became a necessity as libraries grew. But it was the click wheel that made the iPod perfect.

Nobody ever needed to read an iPod instruction manual. Almost the only reason anyone ever had to call tech support was because of a rare mechanical breakdown or a broken software update. I owned three over the years and only ever upgraded because I wanted to.

The iPod Classic operating system hasn’t been updated in over a decade but maintains compatibility.

Think about this for a moment: A first-gen iPod Classic from 2001 will still play music synced with any modern Mac or Windows computer you can buy today.

Here I am, syncing today’s music selection on my 2009 model as I write these words: 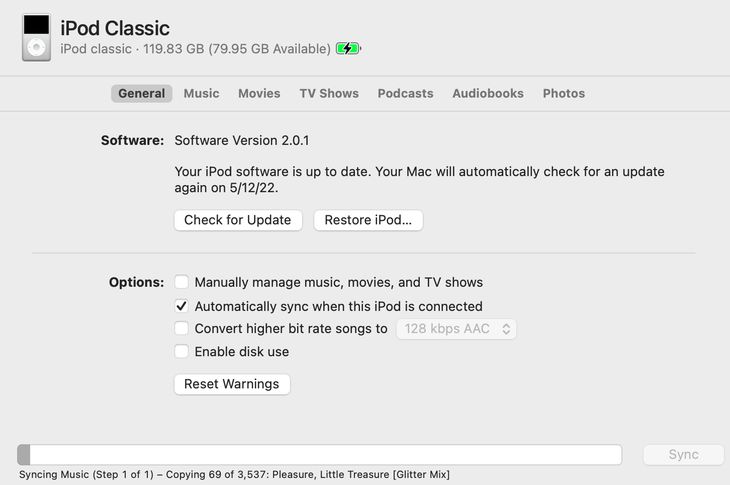 “1,000 songs in your pocket” was the original sales pitch, an unimaginable amount of storage compared to the competition in 2001.

The iPod was fast about it, too. You could sync those thousand songs in minutes over FireWire, versus up to an hour to sync a single album over USB-1 on the competition’s devices.

I hauled out my 2005 fourth-gen iPod this morning to see if it still works. 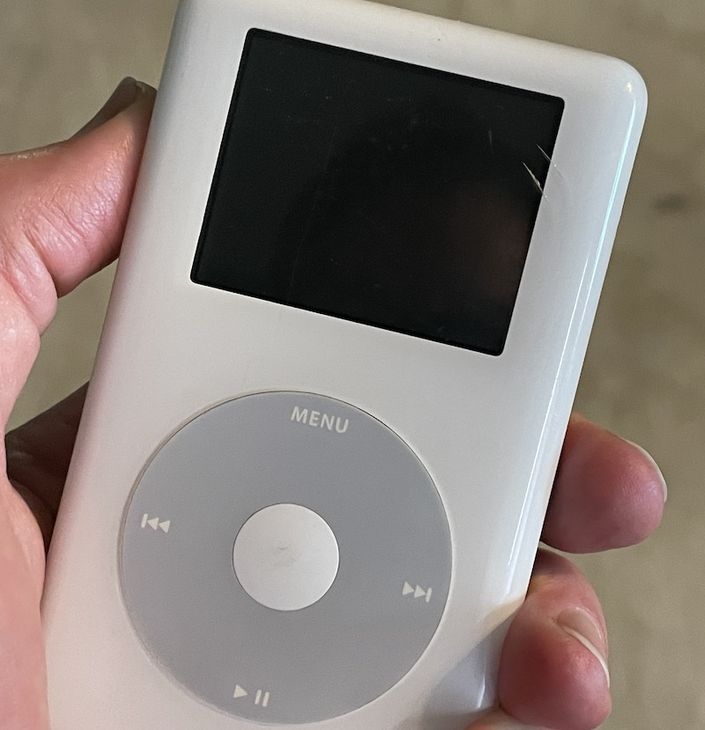 It’s been stashed away in various drawers for about 15 years, and it almost boots up. The battery is toast, but the hard drive seems fine. There are people on eBay willing to sell me a replacement battery and the tools to swap it out for about $12 if I really want to get it working again.

How many consumer gadgets age so well?

If the whimsical iMac saved Apple from bankruptcy in 1997, the iPod turned the company into a consumer electronics powerhouse. By 2006, iPod accounted for two-thirds of Apple’s rapidly growing revenue, and investors worried that once it became obsolete, Apple would be ruined.

Instead, Apple obsolesced the iPod themselves in 2007 when they introduced the iPhone. The rest — Apple becoming the world’s most valuable company — is financial history.

But it all started when Steve Jobs, standing on stage, pulled a little steel and white plastic gizmo out of his jeans and told his audience, “1,000 songs in your pocket.”

For me and my fellow iPod diehards, they’re still there.

Steve launched VodkaPundit on a well-planned whim in 2002, and has been with PJ Media since its launch in 2005. He served as one of the hosts of PJTV, a pioneer in internet broadcasting. He also cohosts "Right Angle" with Bill Whittle and Scott Ott at BillWhittle.com. He lives with his wife and sons in the wooded hills of Monument, Colorado, where he enjoys the occasional adult beverage.
Read more by Stephen Green
Tags: APPLE CONSERVATISM VIP