Science, we’ve been told countless times, is a process that must be respected, particularly regarding the groundbreaking new mRNA vaccines against COVID-19.

Let me back up a moment.

In Early 21st Century/Mid-Weimar/Late-Roman America, we actually have two sciences.

Traditional science is the one we all learned about in school. It’s really nothing more than a process — using hypothesis, data collection, theory, repeated testing, repeatable results, and peer review — to eliminate, as much as is possible, human error from our investigations into how the universe works.

Science isn’t perfect, nor is it easy. It isn’t meant to be. Each new discovery carries the “risk” of invalidating something previously believed to be fact.

Science™ isn’t a process for doing much of anything. Science™ is a set of immutable beliefs, ranging from the efficacy of wearing masks outdoors to the total safety and efficacy of mRNA vaccines.

At what point are we all going to wake up to this Worldwide SCAM🤬. No Bob, it’s real🤔. Oh yeh numb nuts, tell me how many people died of the flu the last two winters😳. Exactly, open your damn eyes and FINALLY REALIZE, IT’S ALL A SCAM😤pic.twitter.com/jk8ksRkqte

Science™ is not to be tested, reviewed, or even publicly questioned.

Science™ is a species of gnostic knowledge known but to a few, usually named Anthony “Doctor” Fauci, our nation’s most celebrated medical spokesmodel.

To attack Fauci, He Himself has told us, is to attack Science™.

One can’t be allowed to commit such heresy, not in a free country like Early 21st Century/Mid-Weimar/Late-Roman America.

Not even on that useless, time-wasting, 24-7 digital shouting match called Twitter.

Heresies will not be tolerated. Heretics must be silenced.

The latest example is none other than that radical anti-science organization… er, anti-Science™ organization… the American Heart Association.

Full Disclosure: I’m a big fan of the American Heart Association, and have helped arrange donations from my late grandfather’s charitable trust in support of the organization’s work. But I’m an even bigger fan of free speech and free discourse, something that cannot be said of the digital fascists who push Science™ on us.

Twitter has decided that those AHA know-nothings shouldn’t be allowed to frighten the unwashed with news of a study showing that mRNA vaccines increase the risk of developing heart diseases from 11% to 25%.

Also for our VIPs: Cocktails with VodkaPundit: The Colorado Old Fashioned

That’s an increased risk of almost 150%. Nothing to sneeze at, particularly for people with other underlying medical conditions.

But forget the fact that mRNA vaccines might be unsafe for those with weight or cholesterol problems. What’s really unsafe, according to Twitter, is sharing that information.

Try clicking on the link embedded in that tweet…

The link goes to the AHA’s sinisterly-named Abstract 10712 with the headline, “Mrna COVID Vaccines Dramatically Increase Endothelial Inflammatory Markers and ACS Risk as Measured by the PULS Cardiac Test: a Warning.”

Below the abstract of the study, you’ll even find… FOOTNOTES!

So if you click on that link via Twitter, you’ll be warned in big text, “Warning: this link may be unsafe.”

Below that is a big button to take you safely “Back to previous page.” 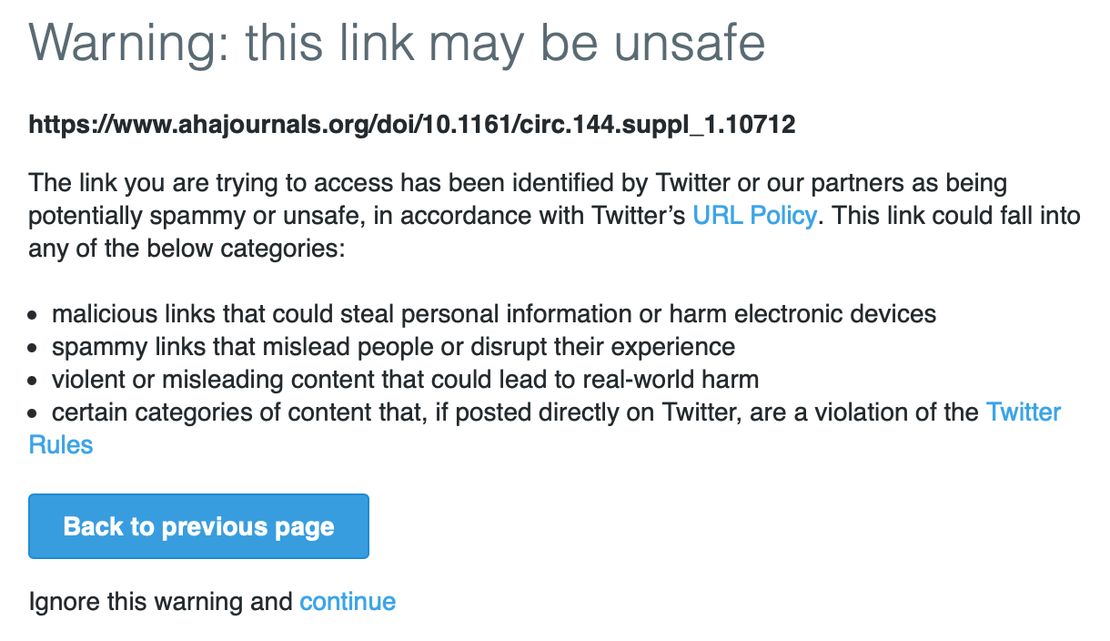 If you squint, you can see the part that reads, “Ignore this warning and continue.”

Here’s a direct link to the abstract, which you really ought to read for yourself, free of any warnings.

I want to be explicit about what Twitter is doing here: They’re hiding information of vital importance to the health of untold numbers of Americans behind a WARNING! sticker claiming it’s the study that’s unsafe.

Because Science™ isn’t about saving lives.

Science™ is about saving sheltered minds from uncomfortable information. But mostly Science™ is about protecting the powerful from the deadly fallout created by their own ruthless ignorance.