Insanity Wrap: Prof Canceled for Not Having the Real Feelz About Fake Hate

Welcome to Insanity Wrap, your weekly dose of the best of the worst. Thoughtcrime about fake hate is the new big crazy.

#ProTip: If you’d rather not get vaccinated, try ordering one of these from Etsy and filling it out yourself.

Fake Hate Is As Real As It Gets for Canceled Professor

Here’s what happened in his class:

On Sept. 16, a non-White visiting artist working with non-White theatre students at the South Carolina university wrote a list of names on the board so that the students could connect as a group.

When the next class arrived, those students jumped to the conclusion that the list of names had been written with malicious intent. In response, they staged a protest.

The student protested names written on a chalkboard.

Because they’re vicious idiots with the moral pretensions of a self-righteous labor camp guard.

The Department of Theatre’s Diversity, Equity and Inclusion Committee concluded that the names had been presented “as a resource for newer students who are looking to be in community with other BIPOC students.” But that finding didn’t stop them from apologizing for the confusion in an email to the department.

The department apologized, not because anything bad had happened, but because “Equity and Inclusion” committees exist to spew harmful nonsense.

Enter theater professor Steven Earnest, stage right, to question the ridiculous apology: “Sorry but I don’t think it’s a big deal. I’m just sad people get their feelings hurt so easily. And they are going into Theatre?”

So now what? Now Coastal Carolina University has begun proceedings to fire Earnest, a tenured professor, for stating (in our words) that not only does the emperor have no clothes but he also has a tiny little…you know.

Earnest is being represented by FIRE, so maybe he stands a chance.

Regardless, Insanity Wrap blames the wicked children — we remember when we used to call college students “young adults” — who saw a hate crime where there wasn’t one, and the university that doubled down when reality didn’t live down to their precious little feelz.

Recommended: Nice Infrastructure Bill You Have There, Joe — Too Bad It Might Have Destroyed Your Presidency

Insanity Wrap wants to live in a world without Twitter.

Barring that, however, we’d be happy to settle for a world in which celebrities went back to being pretty on the screen or stage and otherwise left us normal people alone.

In the waters and ports of Los Angeles, shipping containers are stacking up like cordwood, thanks to an ongoing logistical crisis that everybody knew was coming and nobody did anything about.

In Texas it’s a different story:

“It’s a tool that the governor is using to try to help slow down, curb this invasion,” Nehls said in an interview Thursday on Fox News.

Abbott has said that barriers are needed for about 733 miles of Texas’ 1,200-mile border with Mexico. The state has not completed any permanent portions of the border wall, but some sections could be up as soon as the end of December.

Insanity Wrap is going to ignore all questions from Democrats regarding where Texas got all those shipping containers until Democrats have done something about all the ones stacked up in and around Los Angeles.

The Craziest Person Trial in the World (This Week)(Ever)

You have probably read this already, but bear with Insanity Wrap a moment while we get the others caught up:

Grosskreutz carried a Glock pistol on him that night that was illegally concealed. His concealed-carry permit had expired.

And then Grosskreutz told the truth, and in so doing, made the second admission that blew up the state’s case.

Under questioning by the defense attorney, Grosskreutz admitted that Rittenhouse hadn’t shot him until his own Glock pistol was pointed toward Rittenhouse.

In a piece clearly designed to encourage yet more partly violent riots when Rittenhouse is justly and inevitably acquitted, here’s how the Daily Beast framed it:

Grosskreutz, however, admitted to the jury on Monday that he did point his firearm in Rittenhouse’s direction when the teenager shot him in the bicep, albeit, the witness claimed, by accident.

“I wasn’t aiming my gun at Rittenhouse,” the defendant wants us to believe, “I was merely aiming it towards him.”

Insanity Wrap has to chuckle because one of our go-to jests in real life is: “I’m not laughing at you; I’m laughing towards you.”

We’ve been using this silly line for years. We just never dreamed that a stupid gag would someday be used in a very serious murder trial as a justification for locking away an innocent man. 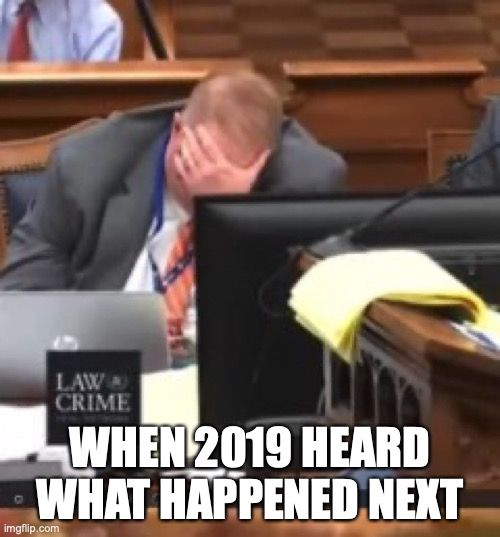 Insanity Wrap gets the feeling we’re going to be seeing this screencap get memed a lot over the next few… centuries.

This week only, use promo code 2022 for a 40% discount on your new PJ Media VIP subscription — our largest discount ever.