Wednesday’s Elder Egg Attack is just one more sign that those on the American left generally, and California specifically, have lost their collective minds.

Facing a hostile crowd while visiting Venice, Calif. yesterday, Republican recall election gubernatorial candidate Larry Elder was hit on the head with an egg thrown by a mostly peaceful protestor wearing a gorilla mask and shouting obscenities at him.

Elder wasn’t hurt by the egg, which a campaign staffer said had “kind of glanced his head.”

That’s according to a Los Angeles Times report.

Admittedly I’m assuming the gorilla mask was supposed to be a racist thing, but given the hostile nature of the crowd and the high stakes of the recall, it’s probably a safe assumption.

The egg-thrower was also wearing a little black dress and a fuchsia wig that appears to be part of the Nikole Hannah-Jones Collection. 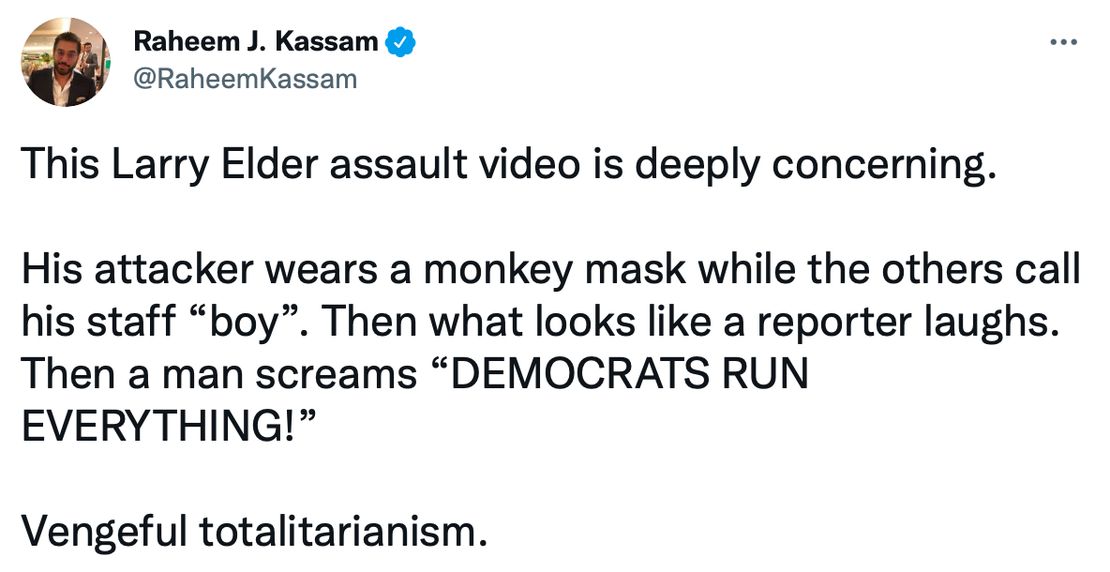 Elder, a libertarian-leaning radio talk show host, was in Venice to cast an early vote in the election to recall sitting Democratic governor Gavin Newsom. According to recent polls, Elder maintains a healthy lead among a whole host of other challengers.

The left has pulled out all the stops in its effort to save Newsom, and made the race explicitly about Elder’s supposed radicalism and maintaining California’s mask mandate.

The Washington Examiner reported that the egg-throwing wasn’t the only time things got physical during Elder’s brief visit:

NAACP president Ben Jealous recently accused Elder, who is black, of promoting a “white supremacist ideology” and trying to “hide his extremist record.”

None have been asked by the mainstream media to disavow attacks like yesterday’s or overheated rhetoric like the stuff published by Jealous.

While voting has already begun, Tuesday, September 14 is the official Election Day.

Steve launched VodkaPundit on a well-planned whim in 2002, and has been with PJ Media since its launch in 2005. He served as one of the hosts of PJTV, a pioneer in internet broadcasting. He also cohosts "Right Angle" with Bill Whittle and Scott Ott at BillWhittle.com. He lives with his wife and sons in the wooded hills of Monument, Colorado, where he enjoys the occasional adult beverage.
Read more by Stephen Green
Tags: CALIFORNIA WOKE