The problem with “push-back” against “dumb, irresponsible conservatives” is that sometimes we push back harder, as that master of “explainer” “journalism,” Matt Yglesias, is learning yet again.

In a since-deleted tweet, the former Vox editor (now the proprietor of Slow Boring) posted his vision for imposing social control on his recalcitrant, or at least reluctant, fellow Americans.

Before we get deep into the weeds, I must remind you that I always think of Yglesias as the dumbest well-read man in America, when I bother to think of him at all. Researching this column, I decided to see for the first time what kind of dumb takes he’s posting at his new site, rather than the dumb takes he posted at Vox.

Biden can barely get major legislation passed by his own party, including a putative “infrastructure” bill that’s been watered down more than the top-shelf vodka at a low-rent nightclub.

Yglesias was and remains the master of the “He couldn’t be that dumb for real, could he?” explainer piece.

But back to the topic at hand.

Having lost the battle over vaccine passports, Matty has now moved on to making vaccines mandatory.

There’s so much wrong here that it takes a highly-trained media critic with two decades of experience — that’s me again — to take it all apart.

Full Disclosure: I’m fully vaccinated with both Pfizer shots, had no ill effects, and would never dream of taking such a personal decision, with different risks for different people, and making it mandatory for everyone.

First of all, conservatives didn’t “bully” anyone on the Left into changing their minds one whit on vaccine passports.

They wanted them then and they want them now. All we did was force them into a temporary holding action instead of continuing the full-fledged assault on our right to travel freely about the country.

Secondly, conservatives weren’t the ones doing the bullying. We merely defended our constitutionally protected rights from would-be thugs like Yglesias.

Of course, this is the same Matt Yglesias who once praised the Nazis. 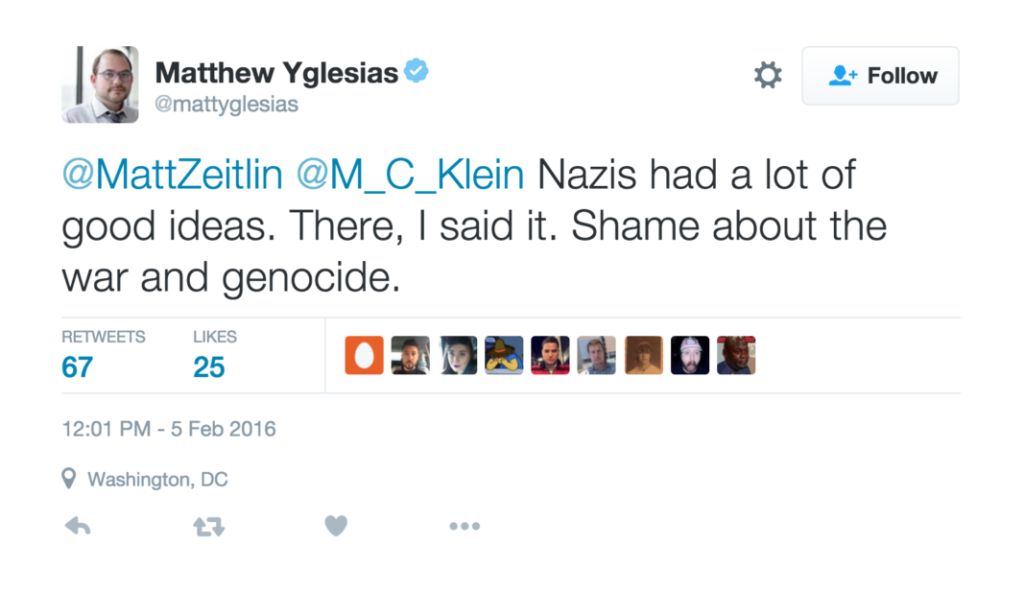 Internal travel documents were a Nazi favorite, and one explicitly endorsed by Yglesias for this country as so-called “vaccine passports.”

“Do you haff your papers?” Sturmbannführer Yglesias needs to know.

Thirdly, it is not conservatives being “dumb” and “irresponsible.” Vaccine hesitancy is a bipartisan phenomenon, and a well-grounded concern, too.

What’s dumb and irresponsible is to mandate a vaccine with infrequent-but-real side effects on virtually every American, regardless of their personal risk factors or even whether they’ve acquired long-lasting natural immunity. 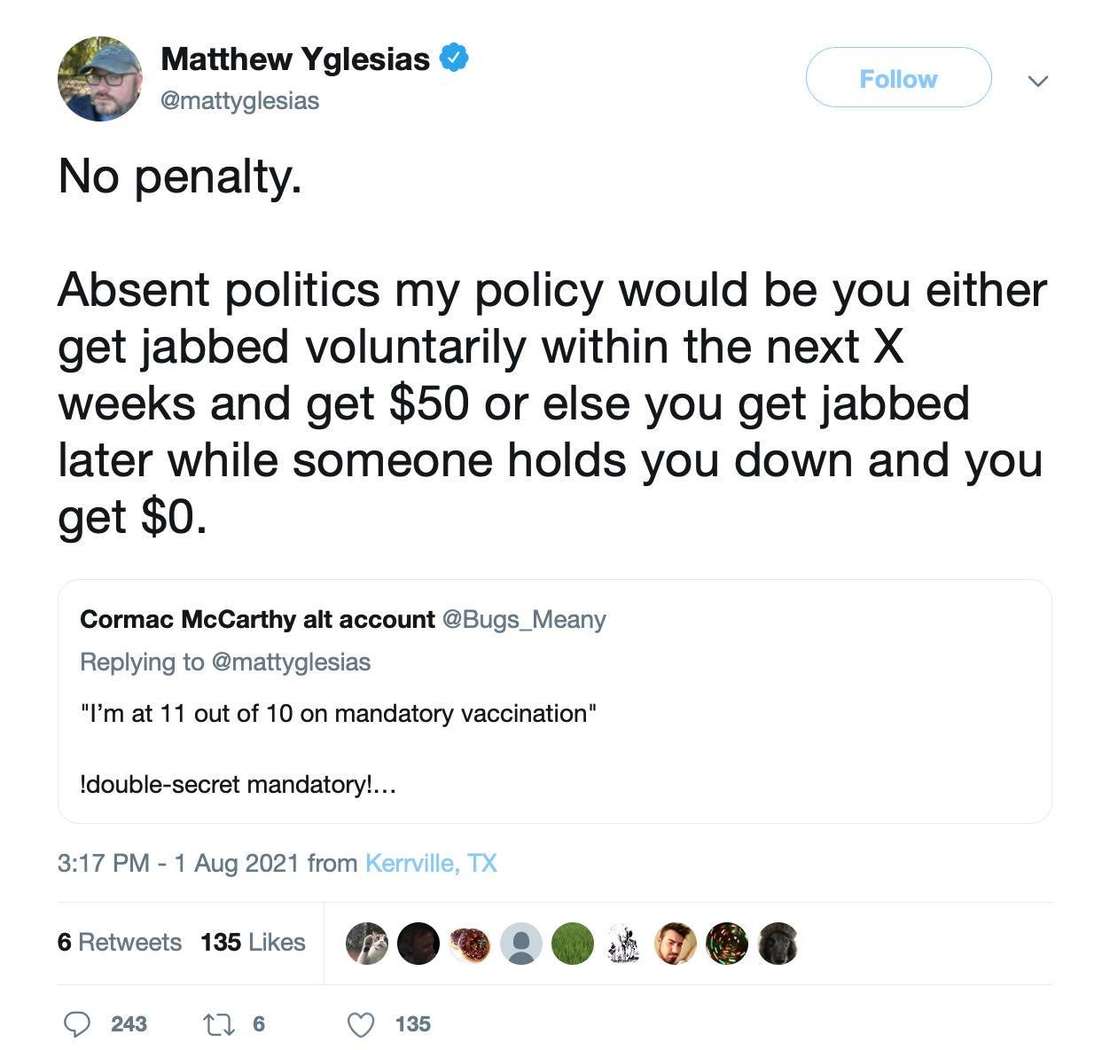 “My body, your choice,” if you’ll allow me a crude paraphrase.

But, honestly, I’m not here to debate the wisdom, efficacy, or the constitutionality of internal travel documents or vaccine mandates. The broader, more important discussion is how the Left’s attitude toward their fellow citizens is so plainly and perfectly expressed by Yglesias.

Their attitude is equal parts domineering and condescending.

Notice, please, the insistence that any disagreement — no matter how well-founded — must be because we’re dumb and/or irresponsible. Also note that our arguments and concerns aren’t things to be addressed with facts and reason. Instead, they’re to be pummeled into submission with mandates or “nudged” into goodthink by making conditional your civil rights.

Between increasing natural immunity and effective vaccines, it’s been months and months since I’ve worried about the physical health of my fellow Americans. But the civic health of this country is almost ready for life support.

Steve launched VodkaPundit on a well-planned whim in 2002, and has been with PJ Media since its launch in 2005. He served as one of the hosts of PJTV, a pioneer in internet broadcasting. He also cohosts "Right Angle" with Bill Whittle and Scott Ott at BillWhittle.com. He lives with his wife and sons in the wooded hills of Monument, Colorado, where he enjoys the occasional adult beverage.
Read more by Stephen Green
Tags: PROGRESSIVISM COVID VACCINE VACCINE PASSPORT