The Bad (And Good) News About Going Unvaccinated

I’m not usually one to side against Tucker Carlson or with Democrats, but the fact is that the current surge in Wuhan Flu cases is occurring mostly among unvaccinated people.

Before we get to the figures, however, I’m also here to tell you that the “surge” is not worth panicking over — even though that’s exactly what Democrats want you to do. Carlson might have gotten the numbers wrong, but he’s 100% correct when it comes to the lousy politics of the Wuhan Flu, as you’ll see in today’s VIP column.

Full Disclosure: I’m fully vaccinated (Pfizer) and so is my family. None of us is in a risk group, but we have friends and family that we like to visit with who are in more than one risk group. Since no vaccine is 100% effective, it’s best for all of us to be COVID-resistant. Also, since none of us caught it, getting resistance meant getting vaccinated.

On his Fox News show Monday night, Carlson was talking about the Texas Democrat crew of Typhoid Karens who fled their state assembly duties to showboat in D.C. — and spread COVID among the vaccinated.

We’re not saying there is no benefit to the vaccine, there may well be profound benefits to the vaccine. Our mind is open and has been from the first day. We never encouraged anyone to take or not to take the vaccine. Obviously, we’re not doctors.

But we know lying when we see it and you just saw it. To say again, in unison, and they are all saying it: this is a pandemic of the unvaccinated is simply untrue. That’s a lie.

It might be more correct to say that it’s a pandemic mostly of the unvaccinated.

ABC News provided a chart showing just how lopsided the numbers are: 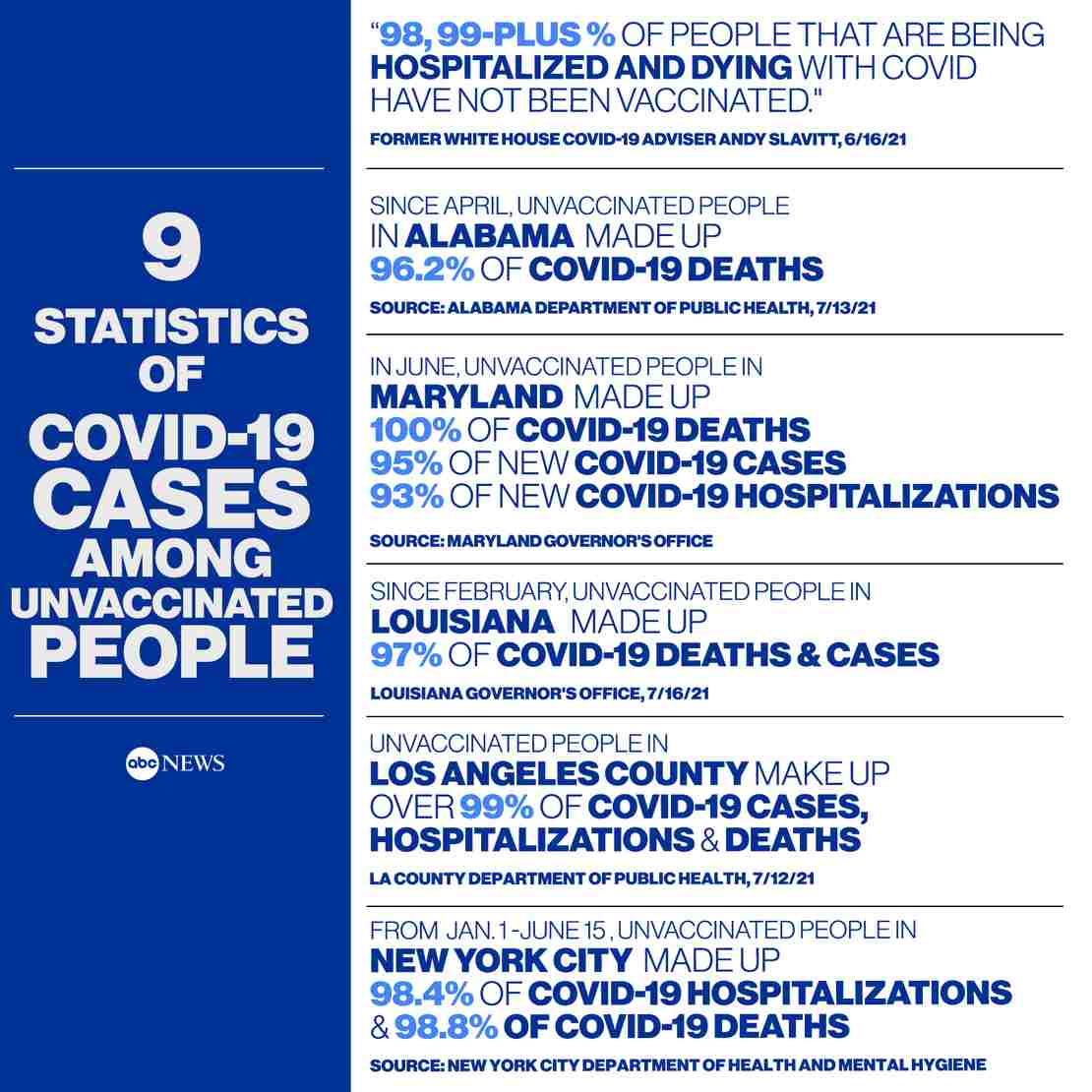 I’m going to call semi-BS on three of the figures quoted here.

First, Andy Slavitt works for the Biden White House and is therefore suspect. So forget his figures.

So let’s leave those questionable figures out of the equation, shall we?

But Alabama, Louisiana, and Maryland are reporting figures from June, long after vaccinations were available to literally anyone who might need them, and neither Alabama nor Louisiana are exactly Democrat strongholds.

When they say that 95% or more of hospitalizations and deaths are among the unvaccinated, there’s not much reason to call BS.

But even these “scary” figures about the unvaccinated don’t tell the whole story — far from it.

Based on all the panic mongering from the Democrat-Media Complex, you’d think that the unvaccinated dead were stacked up like cordwood on the sidewalks in front of our collapsing hospitals.

The very latest figures from COVID-NET show that hospitalizations are no higher than the very low (and perfectly manageable) numbers we saw in the earliest days of the pandemic.

Hospitalizations even among the most vulnerable 65-and-older cohort are now less than a third of what they were at this same time last year — and COVID “related” deaths, as they say, remain a fraction of those hospitalized.

The hospitalization rate for even the most vulnerable among the unvaccinated is a bit less than 2.9 out of 100,000 people. You’re much more likely at any age to become a victim of violent crime in Chicago — the statistics bear this out — than a senior citizen is of going to the hospital with COVID.

We might see another Wuhan spike this fall and winter — it is a flu bug, after all, and we call those months “flu season” for a reason. But given that natural immunity is likely even more effective than vaccination, and given the overall trend line, this flu season’s spike ought to be a pale shadow of what we saw last time.

So when ABC News and the Left’s adoring Twitteratti say that COVID-19 has become a “pandemic of the unvaccinated,” they’ve defined “pandemic” so low as to be meaningless.

As Tucker Carlson also noted in that same segment on Monday night, “we should not allow ourselves to be bullied by political forces into ignoring obvious questions.”

Use your own best judgment on whether or not to get vaccinated, taking into account everything we know to be true, the health risks for both you and the people you care about.

But ignore the panic mongering over a pandemic with a “murder” rate currently lower than Chicago’s.

Steve launched VodkaPundit on a well-planned whim in 2002, and has been with PJ Media since its launch in 2005. He served as one of the hosts of PJTV, a pioneer in internet broadcasting. He also cohosts "Right Angle" with Bill Whittle and Scott Ott at BillWhittle.com. He lives with his wife and sons in the wooded hills of Monument, Colorado, where he enjoys the occasional adult beverage.
Read more by Stephen Green
Tags: VIP COVID VACCINE