Defeat Racism With This One Weird Trick

Welcome to Insanity Wrap, your daily dose of the best of the worst. How to defeat racism with this one weird trick is today’s big crazy.

Glasses are.. you guessed it.. racist! pic.twitter.com/WtvIk2YpgP

Glasses are racist because they were invented by white people.

Insanity Wrap needs to know: Exactly how bored does a person have to become before they’ll take some random item in their possession and try to determine its secret racist foundation?

P.S. Miss, glasses give everybody those annoying little grooves — even white people!

Approximately every other pope, someone brings up the fact that Rhode Island’s junior Democrat senator, Sheldon Whitehouse, belongs to a whites-only beach club.

He has not done so.

“But surely,” we hear you ask, “Whitehouse has used his influence to open up Bailey’s and that other place to non-whites, right?”

Neither has his wife, Sandra Thornton, who is an actual part-owner of the club.

Belonging to a beach club that might as well have a sign on the door saying “No Coloreds” is “a long tradition in Rhode Island,” the senator says.

Well, so is electing boneheads to the Senate, but that doesn’t make it right.

For what it’s worth, Rhode Island has elected exactly four Republicans to the Senate in the last 100 years, and two of those were Chafees — which Insanity Wrap posits don’t count.

If the Whitehouses wanted to quit, they could have. If they wanted the club to admit non-whites, they could probably have wrangled that, too.

Still, the media barely bothers Whitehouse over his longstanding membership at a historically all-white beach club, despite the fact that “if a Republican belonged to an all-white club for even a year, the media would never let it go.”

But there’s a very good reason for the seeming discrepancy: Whitehouse has learned how to defeat racism with this one weird trick.

Over 1,200 retweets for the initial false information.

11 retweets for the correction pic.twitter.com/SmOxNPTewH

The important thing is that a lot of smug wokists got their daily ration of hate clicks.

Insanity Wrap could have sworn we were done with kleptocrat Hamid Karzai, but no.

Apparently, the longtime former Afghan president described in WikiLeaks cables as “as weak, indecisive, paranoid and beholden to criminals” thinks we didn’t do enough to save his shithole country from itself.

Did we not spend enough money?

Did we not shed enough blood, including our own?

Afghanistan isn’t actually a country, s***hole or otherwise. Afghanistan is a hole in the map where other countries aren’t.

A hole in the map into which we have poured 20 years of blood and treasure trying to rectify.

But we’re done now, and so are you, Mr. Karzai.

Here’s higher quality video of the shooting that took place in #HumboldtPark #Chicago I really wish Lightfoot would divert that $10 million to keep criminals off the street. pic.twitter.com/Qn6H6BSEW2

Move out of the cities while you still can.

And sleeping too little.

You see, good friends came into town yesterday for the rare privilege of sending their youngest off for his plebe year at the Air Force Academy.

So we were required to get together and do all those things.

Totally not our fault. 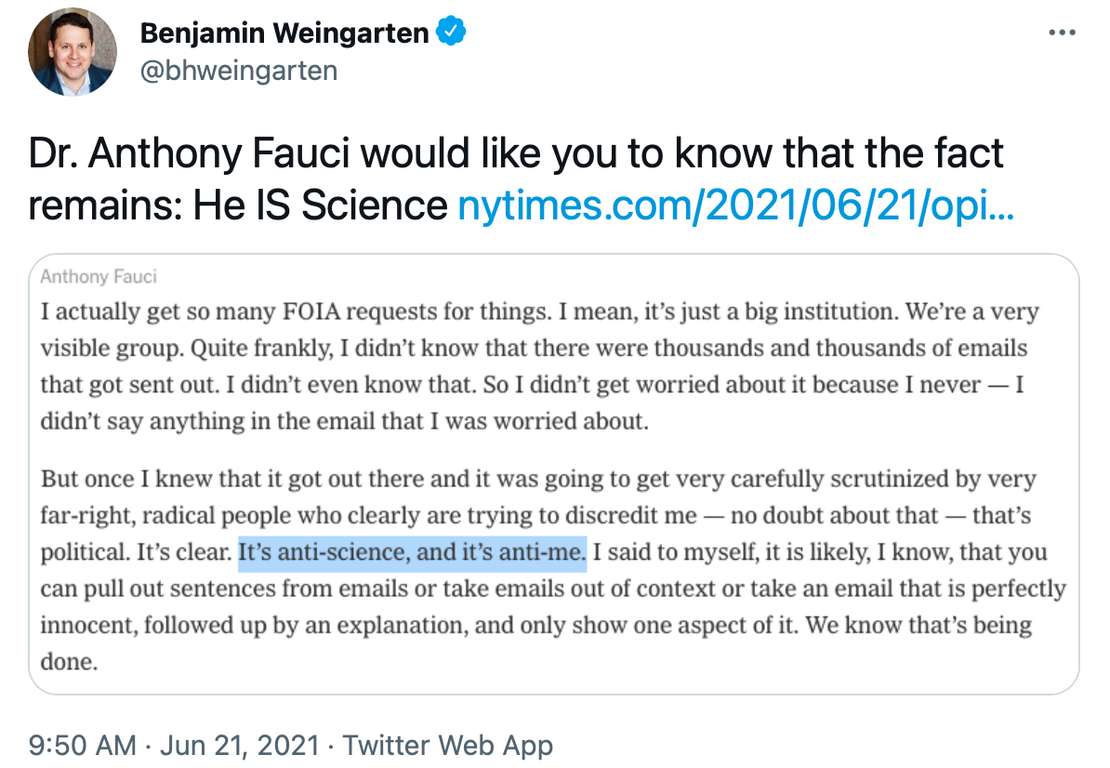 Cult of personality much?

Insanity Wrap must say something one more time. Hopefully the last time, but we don’t actually hold out much hope.

Science is a process. It’s a process involving disprovable claims, real-world experiments with repeatable outcomes, and peer review, in order to weed out, as much as possible, human bias and failings.

“Anti-me” is the antithesis of all that, which means there’s really just one question you need to ask about Fauci: Not if he stopped being a scientist, but how long ago.

Previously On Insanity Wrap: My Angel Is a (Butch Lesbian) Centerfold

Previously On Insanity Wrap: The Great Reset Comes for the Suburbs

Steve launched VodkaPundit on a well-planned whim in 2002, and has been with PJ Media since its launch in 2005. He served as one of the hosts of PJTV, a pioneer in internet broadcasting. He also cohosts "Right Angle" with Bill Whittle and Scott Ott at BillWhittle.com. He lives with his wife and sons in the wooded hills of Monument, Colorado, where he enjoys the occasional adult beverage.
Read more by Stephen Green
Tags: WOKE INSANITY WRAP