Insanity Wrap #171: The Trouble With Harry

Insanity Wrap needs to know: What do you do with a kinda-sorta former prince whose civilian skillset consists mostly of being himself for the cameras?

Answer: Hire him as a kinda-sorta former prince to be himself for the cameras.

If you’re wondering what a “Chief Impact Officer” is, please allow Insanity Wrap to explain.

It’s a makework position suitable for otherwise useless semi-former royalty whose name and visage will look great on the promotional materials.

Our republic is so royalty-obsessed that, yes, it’s probably a solid, moneymaking decision for an American company to hire The Harry Formerly Known As Prince to do very little other than collect a generous paycheck for lending his tarnished presence to the company’s public profile.

For shame, America — as useless as the Kardashians are, at least they were homegrown pretend royalty.

Militant Antifa extremists attacked a Turning Point USA rally on Saturday afternoon at the Washington state Capitol in Olympia. Minors were assaulted and the event table was vandalized.

A group of around 20 militants dressed in black and wearing masks gathered on Capitol grounds to disrupt the second amendment-themed rally hosted by TPUSA’s local Washington chapter. The small, conservative rally was attended by around a couple dozen high school students.

What started as an entirely peaceful conservative rally ended up as a partly violent riot — just as soon as Antifa’s left-wing street thugs showed up.

Insanity Wrap isn’t surprised. We just wish the infotainment industry could be bothered to notice that it’s their allies committing the violence.

Just kidding. The media has made us far too cynical to ever even wish they’d do the right thing.

This is what happens when we elevate someone to the national field because they said nice things about someone we like (Trump), are attractive, & give a good speech

It’s with a heavy heart that Insanity Wrap nods our head to: “Yep, she blew it.”

This isn’t some kind of transgender hate-fest purity test, either. Noem was given a golden opportunity to defend women and women’s sports but chose to take the easy way out.

Maybe she can find or manufacture a political moment so street-fightery that we’ll forget this as a one-time flub.

But until then, it doesn’t look like Noem is the street fighter Republicans need in 2024.

As someone who has publicly pondered a DeSantis/Noem (or Noem/DeSantis) ticket, Insanity Wrap hopes Noem finds her guts again.

Party on, Wayne — from the safety of your own dorm room, please.

While plenty of colleges around the country are still having spring break, a number of other schools have canceled the traditional week-long vacation as campus officials across the country cited too high a risk of exposure to COVID-19 as a result of students traveling.

Most universities that have eliminated spring break either lengthed winter break, added in periodic days off for students, or a combination of the two.

In between the occasional bout of studying or maybe even doing some homework, life revolved around bad decisions involving staying up too late, drinking too much, and trying too hard to have sex.

And yet… colleges have not been COVID-19 hotbeds.

We’re not sure how keeping kids on campus — doing the unwise things they’re already doing — is any safer than, say, spending a few days in the open air and sunshine. 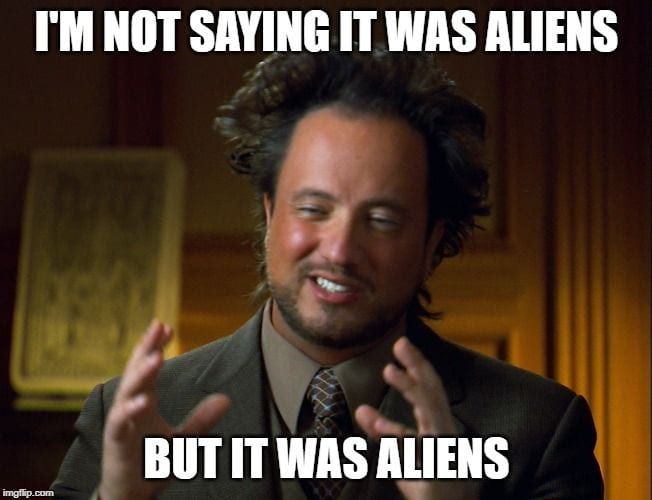 3 lifeforms ‘unknown to science’ discovered inside the International Space Station

This is how approximately 4,018 sci-fi/horror flicks begin:

It may sound completely out of a science fiction film, but a team of American and Indian scientists have discovered three entirely new lifeforms existing in different locations aboard the International Space Station.

The team investigated four different strands of bacteria found between 2015 and 2016 on the ISS and identified one of them. The other three were completely unique to mankind’s scientific knowledge.

Possible alien life on a space station is what passes for a brief moment of sanity on a day like today — and Insanity Wrap will take it.

But if they start finding massive, leathery eggs, we are SO out of here.

Double Standards Are Better Because You Get Twice As Many

The media has two different standards for covering the border crisis. pic.twitter.com/YDyyXfDmxg

Insanity Wrap has long understood just how bad our infotainment industry is but this clip really drives it home.

Well, this is a take, Insanity Wrap supposes:

The Colorado State Shooting Association (CSSA) publicly celebrated a court ruling that struck down a gun control ordinance passed by Boulder city council one week before a mass shooting in the city.

The group is the official state association of the National Rifle Association (NRA) and issued a statement on Twitter early on Tuesday emphasizing the need to grieve for the deceased and saying now was not the time to discuss firearms reform.

Never you mind the fact that the Boulder killer was named Ahmad Al-Issa, and not the “evil rural white man” all of Twitter’s best and brightest blamed for the massacre.

Also note that further legislation would not have magically made Al-Issa’s firearms somehow vanish into the ether in the last week — or month, or year, or decade.

Whatever the anti-gun angle might be, no matter how wrong or wretched, there’s someone on the left who will make it.

Yes, you should have.

Previously On Insanity Wrap: One of Our Presidents Is Missing!

Steve launched VodkaPundit on a well-planned whim in 2002, and has been with PJ Media since its launch in 2005. He served as one of the hosts of PJTV, a pioneer in internet broadcasting. He also cohosts "Right Angle" with Bill Whittle and Scott Ott at BillWhittle.com. He lives with his wife and sons in the wooded hills of Monument, Colorado, where he enjoys the occasional adult beverage.
Read more by Stephen Green
Tags: COLLEGE KRISTI NOEM INSANITY WRAP