Other weeks, one story stands out — I mean really stands out — so far in front of the others that it makes my job easier than the breeze in some old Jimmy Buffett song.

This is one of those weeks.

So without further ado, come sail away on another thrilling…

When you saw the photo you knew this would be the lead story, didn’t you?

Matthew Leatham, 22, dialed 911 to request a ride home after 4 a.m. in the New Port Richey suburb of Tampa on Sunday, according to a criminal complaint.

A Pasco County deputy found Leatham and offered to call him a cab, but he said he didn’t have money, the complaint states.

Leatham then began walking in the direction he lives and again called 911 for a ride, cops said.

Florida Man is nothing if not persistent, as well as being inappropriately tattooed.

The officer caught up to him and arrested him as he was on the line, according to the complaint.

Ironically, Leatham is listed in his high school yearbook as “Most Likely to Appear in a Mugshot with a Visible Tattoo.”

If it’s not too presumptuous, please allow this Colorado Man to give Florida Man a small piece of advice: If you don’t want the police to find your marijuana, a good first step would be to not call them repeatedly.

I hope this helps.

On a more personal note, these last few weeks, Colorado Man stories have been popping up like Florida Man stories — and we don’t even have Florida’s sunshine law to make it easy to find them.

A patient area cleaner at AdventHealth said she never thought she would go back to work after she retired.

Dorothy Dozier, 64, said she envisioned playing with her 19 grandchildren and spending time with them during her retirement.

When the pandemic hit, she all of a sudden found herself, at a risky age, working in the highest risk unit at AdventHealh Orlando.

“You listen to the media, listen to the news, how terrible this thing was, you know, and my health was good,” Dozier said. “I felt like I’m the right one, I can do this, Lord, I could do this.”

Please note that Ms. Dozier is in at least two high-risk groups for COVID-19 mortality, and went back to work before a vaccine was available.

That is one brave lady.

Your Honor, I Move to Dismiss Your Bra

SHOOTING HIS SHOT – A defendant apparently tried to make a move on a Broward judge during his bond court appearance this morning, but he didn't seem to get very far. 😂

Chutzpah, thy name is Florida Man.

However, just seconds into stepping in front of the camera for his virtual meeting, he starts laying on the moves.

“Judge, you [are] so gorgeous, so gorgeous judge, I just had to tell you. You’re gorgeous,” Lewis is heard saying.

Blackmon thanked Lewis for his comments before responding, “Flattery will get you everywhere, but maybe not here.”

The good news for Florida Man Friday readers is that I’m far too mature and distinguished to make a “I’d like to see what’s in her legal briefs” joke.

Sometimes It Isn’t the Kids Who Need the Time Out 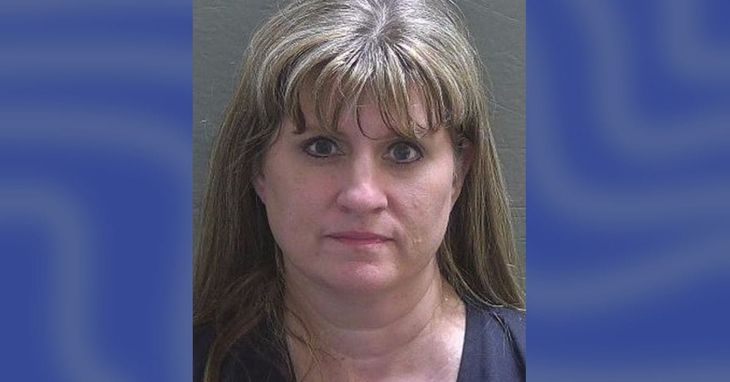 My boys are usually great kids, except for when they’ve dug in their heels on something where they’re obviously in the wrong, or when they’re actually trying to murder one another to death.

So I understand frustration.

But no stabbing, please. Not even with a [checks notes] ceramic candle.

Also Don’t Do This

Fortunately, Florida Man is going to be OK, despite other Florida Man’s quick reaction time.

I Fought the Law and… You Know the Rest

Just another Thursday in paradise:

Florida man was taken into custody after police said he kept attacking two sheriff’s deputies and their K-9 despite losing and regaining consciousness twice — and getting tased — during the scuffle, according to WEARTV.

“He fought two deputies and resisted their efforts to use a taser,” investigators told the local station.

When the taser failed to subdue the suspect, deputies deployed K-9 Zeek on Mathis. The suspect then tried to fight the police dog, reportedly grabbing him around the neck.

Neither the police officers nor — thank goodness — their dog, Zeek, was seriously hurt.

But of all the stories I couldn’t find body cam footage for, this had to be one of them.

We really are so screwed.

Florida Man builds a rollercoaster for his kids

“When the pandemic came in they shut the parks down so I built a basketball court for my son,” said Scott Friga. “They shut the gyms down, so we built a gym.”

Friga has been on a mission since the pandemic began in early 2020 to make his kid’s wildest dreams come true, and almost a year into the pandemic, he’s still going strong.

Fast forward to the end of 2020, Friga’s kids had another idea—a rollercoaster.

The basketball court and the gym is cool and all, but a rollercoaster sounds way cooler. So Friga and company got to work building the coolest rollercoaster they could think of on one of his properties.

A stranger repeatedly asked a Target customer if he could see her shoes. The woman, who was shopping with her child, kept refusing. The man then forcibly removed her shoe and sock; and not only filmed her feet but also filmed her child.

Whatever it means when people say they literally can’t even is exactly what I can’t even do now, literally.

I know this story doesn’t fit the usual Florida Man Friday Template of Weirdness, but I love reports like this one so much I just have to share:

New Jersey-based Ramapo-Bergen Animal Refuge said in a Facebook post on Tuesday the pup was adopted from its center a few months ago by a man named Brian who had developed a “special bond” with the dog despite it being nervous around men.

The team said Brian had helped to give the dog, Sadie, a second chance at life, and last week it returned the favor by helping him during a medical emergency.

According to Ramapo-Bergen Animal Refuge, the female dog “never left his side” and “licked his face to keep him awake” as Brian was suffering the stroke. It said Sadie had helped to pull the man across the room so he could get access to his cell phone.

Good girl, Sadie, I hope you get all the treats forever.

This one comes from increasingly colorful Colorado:

Stuart Kelly, 63, is facing criminal charges in Weld County for assault on a peace officer, felony eluding, driving under the influence and habitual traffic offender. He could also face additional charges resulting from the destruction of the Morgan County farmstead, KDVR reported.

The pursuit began when Kelly failed to stop the U-Haul on police command and almost struck on officer on Colorado Highway 53.

After eluding authorities across several jurisdictions and driving through several traffic deterrents, including “stop sticks,” Kelly eventually drove through the old farmstead house and traveled about 200 additional feet before the vehicle came to a stop, KCNC reported.

I am filled with state pride.

Back over to you, Florida Man, until next week’s thrill-a-minute edition of…

Previously On Florida Man Friday: The Inspiring Drag Queen Who Saved the Neighborhood