Insanity Wrap needs to know: What do you call a dose of COVID vaccine with a short shelf-life requiredby Gov. Andrew Cuomo to sit on a shelf for too long?

Answer: The world’s most expensive placebo.

Troubled underage kids will likely have one less obstacle between themselves and surgical mutilation.

California Insurance Commissioner Ricardo Lara asked the Department of Insurance to issue a General Counsel Opinion Letter clarifying that gender dysphoric individuals cannot legally be denied chest reconstructive surgery solely based on their age in the state of California, meaning those under 18-years-old would be able to qualify for such procedures.

“For far too long, individuals diagnosed with gender dysphoria have had to battle a host of challenges to get access to gender-affirming care in order to be their true selves,” said Commissioner Lara.

For the record, Insanity Wrap will never agree that mastectomies on healthy bodies could ever be called “reconstructive.”

Granny-Killer Cuomo Is at It Again

If you wanted to make sure that rapidly expiring vaccines distributed in 10-dose vials end up in the trash, this is how you'd do it pic.twitter.com/kBt5JqDmlD 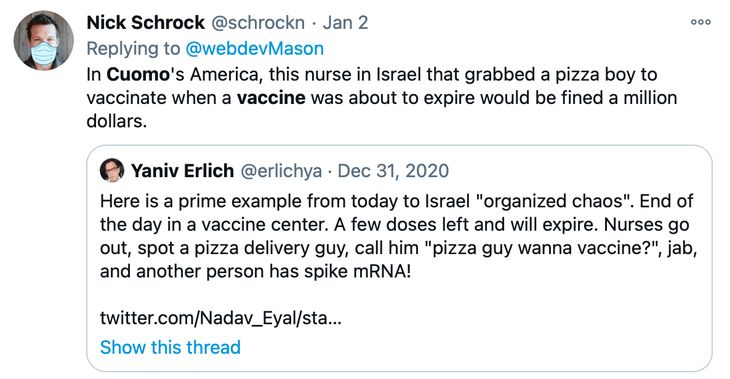 There’s more at the links, but Insanity Wrap probably enjoyed this reply to the Cuomo COVID vaccine delay the most:

You didn’t come here for the sanity, did you?

So this is a thing we have to do now:

The legislation aims “to provide that for purposes of determining compliance with Title IX of the Education Amendments of 1972 in athletics, sex shall be determined on the basis of biological sex as determined at birth by a physician.”

Insanity Wrap misses the days when a physician wasn’t required to determine the sex of newborn babies.

Honestly, anyone involved in the making of child (or just practicing!) can tell which parts are which without difficulty.

Even in the dark.

More seriously, kudos to Tulsi Gabbard for standing up to her party’s Lunatic Wing, which in Washington these days consists of almost any Democrat not named Tulsi Gabbard.

But it’s absolutely nuts that we have to pass a law so that women might be allowed to compete in women’s sports against other women.

2021 looks like it’s going to be nothing but reruns of 2020, and Insanity Wrap is certain that everyone of every persuasion can agree that 2020 sucked quite enough the first time around.

It’s going to be a year where all we’re allowed to do is watch the same 38 episodes of Hello, Larry until we beg for forgiveness from our governments for whatever it was that we did.

Translation: “It has to go viral. RT en masse, folks. Light must be shed on this event.”

You’d have to be the craziest person in the world to do this to people you live next door to.

On New Year’s Eve in Gatineau, Canada, a city in western Quebec, a neighbor notified police about a residence where a group of six people gathered to celebrate, triggering the police to arrive just before midnight to confront the residents, which precipitated a violent brawl with two of the residents getting arrested.

While Insanity Wrap would never condone vandalism of any kind, right now we do understand why certain houses get egged or TP’ed.

Pelosi’s House Is a Superspreader Event

According to Speaker Pelosi, healthy Americans must wear masks, close their small businesses, and stay home at all times.

But a Democrat who tested positive for COVID-19 can travel to DC, vote on the House floor, and is deemed “essential” just to keep Nancy Pelosi in power.

That’s exactly how it works.

Insanity Wrap long ago lost any ability to experience shock at any hypocrisy committed by government officials — elected or not.

The American people have been obsessed with celebrity and fame for generations now, allowing them to get away with most anything so long as it made for entertaining tabloid fodder.

Television turned politicians into celebrities, and celebrities can get away with most anything.

So now we’re in a situation where the worst kind of people — those who love lording it over “the little people” — are drawn to politics like Norma Desmond to a spotlight.

Celebrities, Insanity Wrap doesn’t need to remind you, are among the first to join in new fads, no matter how ridiculous, because novelty is one of the ways to maintain or increase one’s celebrity profile.

That’s one reason you end up with Nancy Pelosi, the Speaker of the Damn House, making new rules that will “ban the use of evil ‘gendered’ words such as father, mother, son, and daughter for use on the House floor.”

"Amen" is a Biblical Hebrew word: אמן. It is a word simply meaning "may it be so." It has nothing to do with the word "man" or "woman" because it is FROM HEBREW. This is some of the dumbest s*** I have ever seen in my life. https://t.co/O4JhcHwywv

Insanity Wrap came across this video on someone else’s timeline, a few minutes before we found Ben Shapiro’s pithy tweet demolishing it.

What that meant though is that when we first watched the clip, we had no idea what it was we were supposed to be watching or listening for.

So you can imagine our shock when at the end of this ridiculously trendy little prayer, we heard “Ah-MEN” and “Ah-WOMEN.”

Previously On Insanity Wrap: California Tumbles Into the Sea