Insanity Wrap #109: Another Hypocrite #DefundThePolice Supporter, Another 911 Call to the Police.

Insanity Wrap needs to know: What do you call someone who votes to #DefundThePolice but then dials 911 to report a crime that they want to legalize?

Answer: You call her Lisa Herbold, and of course she has a seat on the Seattle City Council.

“Again?” Insanity Wrap asked when we saw the headline.

As first reported by police sources to the neighborhood safety group Safe Seattle, Council Member Lisa Herbold called 911 and requested the police for criminal damage done to her home, a crime that the council member is pushing to legalize.

Allegedly a man threw a rock through Herbold’s window. In a redacted police report, Herbold told responding officers that she “was on the west side of the living room near the kitchen when she heard a loud noise that sounded like a gunshot and dove into the kitchen for cover.”

A witness said he saw an “…unathletic and a bad runner” leaving the scene. The suspect was described as a clean shaven, white male in a black hoodie and jeans.

Look, it’s only a crime when it happens to nomenklatura like Lisa Herbold Hypocrite.

When it happens to you, comrade, it isn’t a crime because it’s karmic justice. You’re only getting what you deserve due to your inherent racism and sexism and various phobias concerning people who claim that their weirdness makes them special while your weirdness doesn’t make you anything but phobic.

Insanity Wrap is not impressed.

Sure, antifa has trashed another “autonomous zone,” but they won’t have achieved Full Communism until they’ve set up a reeducation camp, forced labor in the coffee shops, and a mass grave.

That’s the Way to Do It

DeSantis to Florida restaurants, service industries: ‘We’ve got your back’

Republican Governor Ron DeSantis spoke at Okeechobee Steakhouse in West Palm Beach, Florida this Tuesday, asserting that restaurants will remain open in Florida. “We just want to send a message: Some may want to shut you down; we want to pull you up,” he said. “We’ve got your back.”

DeSantis stated, “We’re happy to be here at Okeechobee Steakhouse to really send a message that at a time when folks in our service industries, particularly restaurants, lodging, and hospitality, have kind of taken it on the chin, particularly in other states, where they’ve been completely shut down. We just want to send a message: Some may want to shut you down; we want to pull you up. We’ve got your back.”

Insanity Wrap will repeat for you here, very briefly, something we posted on Instapundit.

Would this be an impolitic moment for Insanity Wrap to tell you that Florida has fewer COVID-19 deaths than New York state does?

Florida also has more people than New York does, and a much higher percentage of the population (21.0% in FL vs 16.9% in NY) in the most-vulnerable 65-and-over age cohort.

Why, it’s almost as though we’re bankrupting tens of thousands of businesses and spending trillions of dollars we don’t have, just so that a few dozen kommissars get to flex their authoritarian muscles. 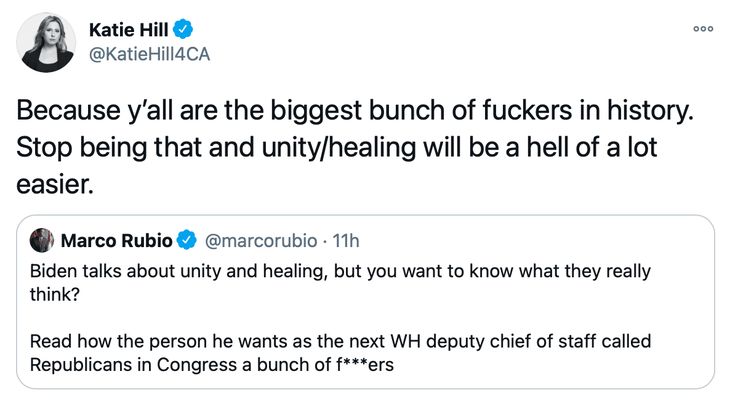 Hill was forced out of Congress for breaking the big no-no about taking sexual advantage of your staff, specifically in a three-way caught on video and leaked on social media.

But because Hill is clearly incapable of shame — and because Americans are addicted to celebrity, no matter how tawdry — she’s never left the public scene.

“Unity” of course still means “Shut up, f-kers, when we tell you what’s what.”

Because that’s when the “healing” begins with you “bunch of f-kers.”

The irony is so thick you could stucco the outside of your house with it.

The mayor of Paris is being fined nearly $110,000 by the national government after she appointed too many women to senior government positions, god forbid.

The fine is the result of a 2012 law meant to correct gender imbalances, which stipulated that no more than 60 percent of one gender can be appointed to high-ranking jobs in a single year. A 2019 amendment made it so that fines wouldn’t be handed out if a disproportionate number of men or women were hired, as long as the “overall gender balance” was respected, the New York Times reports. But the city’s mayor, Anne Hidalgo, did the hiring in 2018, and therefore had to be punished.

Hidalgo said she would deliver the check to the Ministry of Public Service by hand, accompanied by the women in her government—“so there will be many of us,” she said. Too many, some might argue!

There’s nothing more bitter in the world than leftists called on to follow the same rules they apply to everyone else.

Then our friend Bruce Carroll dug up this little gem from last August, and honestly, our day couldn’t have been any more made.

No hints or spoilers — this one is too easy.

It made us laugh anyway, and not just because we had a Bloody Mary with our bacon and eggs this morning.

But mostly because of the Bloody Mary.

Previously On Insanity Wrap: Pray That Joe Biden Isn’t an Honest Politician Who Stays Bought by the CCP