Before we dig into Florida Man Friday, let’s take a moment to reflect.

This is a time of year for giving thanks, and I’m thankful most of all for Florida’s best-in-the-nation sunshine law, which gives us immediate access to the craziest stories.

Sure, every state has plenty of people just as nuts as Florida Man, but those Other Men don’t always make the news.

So without further ado, join me now on another… 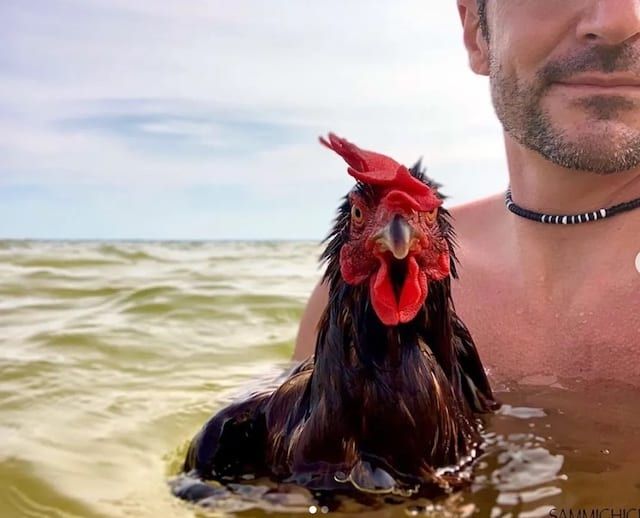 I’m a dog person myself, and totally get this:

Dave Cox and his pet chicken Sammi live in Niceville, but together have been surfing in Georgia, snowboarding in Colorado, seen the Mexican border in El Paso, Texas, attended the Kentucky Derby and recently stopped at the Canadian border — Sammi doesn’t have a passport.

“Many, many times people see us as they’re passing by and make a quick comment, and I say, ‘She’s my dog on two legs,’ ” Cox said. “That’s the way I treat her, and that’s how she acts. She does not identify as a chicken, and I say that very tongue in cheek.”

A heartbroken Cox purchased Sammi in 2017, a year after his blue heeler died. He wasn’t ready for another dog; still isn’t.

“When he’s 17 years old, you’ve had him for almost half your life,” Cox said. “They become apart of your family. Please forgive me, I’m not a fan of cats. So I thought, ‘Let’s just do something different.’ Pun intended, let’s go with a whole different animal. Boy was I right.”

Everybody needs a pet, and if it’s a chicken that helps you get over losing your dog — why not?

You Can’t Touch This

Or at least you really shouldn’t:

For at least three years, Miramar masseuse Cristina Diaz has done lymphatic drainage massages that shove blood and fluids through surgical slits after plastic surgery such as liposuction or Brazilian Butt Lifts.

On Dec. 1, Florida Surgeon General Scott Rivkees issued an emergency order for Diaz to stop. The order stated she did them in a manner that endangered the public health and her license didn’t allow her to do them anyway.

Exit Question: Is it sillier to have bags of silicon implanted in your hindquarters, or to hire someone to have your implanted hindquarters non-professionally… drained?

Exit Statement: It was a difficult thing, writing that last sentence.

Florida Man pays 114 households’ utility bills about to be disconnected

That Christmas spirit left-wing killjoys are always trying to destroy… it lives on in Florida.

Gulf Breeze, Fla., business owner Michael Esmond donated thousands of dollars to pay the bills of 114 families who were at risk of having their utilities shut off, according to a report from CNN.

According to Gulf Breeze utility supervisor Joanne Oliver, Esmond paid $7,615.40 to cover the expenses of the bills, which were past-due, the news outlet reported. Holiday cards notifying the families that their utility bills have been paid will be mailed this week.

“That really impacted me — that people can’t even afford to pay a $100 bill on their utilities and things are so bad,” Esmond told CNN. “That’s why I was able to pay for 114 families.”

Dark Humor in the Time of Coronavirus

Ask a jerky question, get a jerky answer.

One to Beam Up, Daddy

This made me sad:

63-year-old Peter Shatner – who changed his surname last year from his original name of Sloan – was adopted as an infant, but in 1984, his biological mother told him that his father was one of two men, and likely to be Star Trek’s Shatner. Peter Shatner has spent the time since trying to convince Shatner the elder to take a DNA test, the efforts of which, the Tampa Bay Times says, were “rebuffed time and again”.

While the story of Peter Shatner’s efforts has plenty of twists and turns, the end of the story comes from Ancestry.com, and as a result of his decision 11 years ago to try and leverage the website’s DNA-matching service. Earlier this year, it matched him with the children of a man called Benjamin Freedman, who he later confirmed to be his true biological father. Not William Shatner after all.

If I had to have a dad who wasn’t my Dad, for sure it would be William Shatner.

And now, back to our regularly scheduled news…

He Was Just Holding It for a Friend

“I was just holding it for a friend” is usually the lamest excuse ever. But this time, it’s legit. And also… yikes.

The Manatee County Sheriff’s Office said that the unidentified man was keeping the 55-gallon container for a friend who promised he’d come back for it.

The sheriff’s office is working to identify the remains and how the person died. They have not yet named a suspect, though an autopsy was done on Wednesday.

“The guy holding this trash can said that he thought it was a container of personal items,” MCSO spokesman Randy Warren told the Herald-Tribune. “He was told by the owner of the can, ‘I’ll be back for it later on.’”

What terrible news, and here’s to hoping they’re able to ID the body and notify next of kind as soon as humanly possible.

Also, who asks someone else to hold a 55-gallon garbage bin for them?

Just say no to that for sure.

What Is It with Trash Cans This Week?

In the light and breezy spirit of Florida Man Friday, I try not to report on anything too gruesome.

But when you find two bodies-in-trash-cans stories in one week, you can’t really ignore them.

In order to keep collecting a man’s Social Security benefits, a Florida woman stuffed his body into a trash can after he died, according to investigators.

Michelle Haney, 48, was arrested Wednesday by Manatee County Sheriff’s deputies and is now facing charges of abuse of a corpse.

Haney reportedly told investigators that Jon Christopher Leonard, 40, died in July of what appeared to be natural causes. His body was found in a trash can being stored at a neighbor’s home.

Again, terrible news, and let’s hope Florida Woman gets whatever the max is for… whatever particular crime that was.

Honestly, I’d rather not think about it anymore — and I’m done forever with these trash can stories.

Yes, even if someday there are three in one week.

A quick word of warning: This is another one of those stories embedded with internet-transmissible onion fumes.

In October 2005, while deployed to Iraq, Sargent First Class Alwyn Cashe saved the lives of multiple soldiers after their fighting vehicle hit an improvised explosive device and caught fire. Cashe, who was born in Sanford, Florida, and raised in Oviedo, repeatedly returned to the burning vehicle to pull his soldiers out of the flames, all while he himself was on fire and exposed to enemy gunfire.

Cashe suffered burns over more than 70 percent of his body. He later passed away from his wounds.

On September 16, US. Reps. Stephanie N. Murphy, Michael Waltz, both of Florida, and US Rep. Dan Crenshaw of Texas cosponsored H.R. 8276, a bill to authorize the President to posthumously award the Medal of Honor to Alwyn Cashe for acts of valor during Operation Iraqi Freedom.

What a country to produce so many men such as Alwyn Cashe.

Maybe a “mere” medal seems too small a thing, but it does mean that in some small way, the rest of us can gain some understanding of what it means to be a man such as Cashe.

Are You Kidding Me? I Haven’t Been to Florida Since 2017

‘Tis The Season’, Survey Finds Florida Among Drunkest States During The Holidays

SunriseHouse.com, an addiction treatment facility that provides research-based programs and services for adults struggling with drug and alcohol addiction, conducted a survey found that the average Floridian consumes four alcoholic drinks per day during the holidays.

North Dakota emerged at the top of the list as the drunkest state during the festive season, with the average state resident drinking eight alcoholic drinks per day during this period.

My home state of Colorado didn’t even make the top five, and I’ve been living here since 1994?

I swear, this the worst-rigged count since November 3, 2020.

Connecticut detective shamed for offering wager on first murder of 2021

I’m of two minds on this one.

While this was certainly distasteful, so long as the detective wasn’t rigging the bet by moving a body or doing the dirty deed himself, what’s the actual harm?

How much hay is that, anyway?

We didn’t get one of those this week, so would you settle for the heartwarming story of the California Man who rammed police cars, instead?

I knew you would.