Insanity Wrap needs to know: Are you being oppressed by the memory of Abe Lincoln and a very large rock?

Why do these people think wearing a dress and ridiculous socks makes them a woman? pic.twitter.com/D17igOK8iI

BLM-antifa in Portland are marching & chanting loudly through the Laurelhurst residential area in southeast Portland right now. They are heading to the Penumbra Kelly police building, a place they attack regularly. Road is shut down. #PortlandRiots pic.twitter.com/tJnqEJpOYG

Some Protests Against Police Brutality Take a More Confrontational Approach

Insanity Wrap salutes Nellie Bowles at the NYT for her reporting here:

The protests are moving into white residential neighborhoods, where activists demand that people choose a side.

Nearly four months after the killing of George Floyd by the Minneapolis police, some protesters against police brutality are taking a more confrontational — and personal — approach. The marches in Portland are increasingly moving to residential and largely white neighborhoods, where demonstrators with bullhorns shout for people to come “out of your house and into the street” and demonstrate their support.

These more aggressive protests target ordinary people going about their lives, especially those who decline to demonstrate allegiance to the cause. That includes a diner in Washington who refused to raise her fist to show support for Black Lives Matter, or, in several cities, confused drivers who happened upon the protests.

Give in to the mob, get more mobs.

Correction of the Day 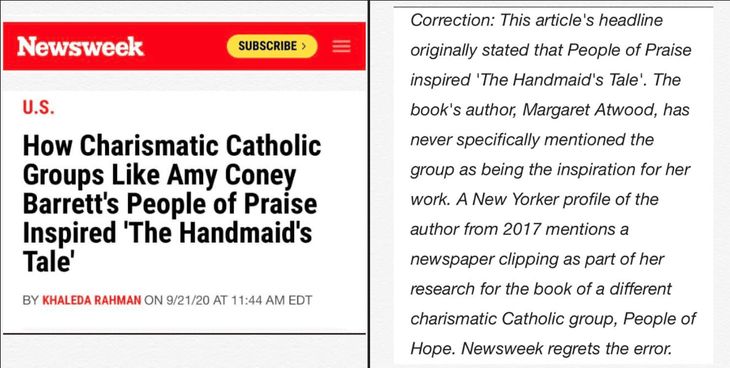 Insanity Wrap must admit to you that we failed to read the entire, lengthy piece.

But we did skip to the end, way down at the bottom of the lengthy page, where you can read this:

Correction: This article’s headline originally stated that People of Praise inspired ‘The Handmaid’s Tale’. The book’s author, Margaret Atwood, has never specifically mentioned the group as being the inspiration for her work. A New Yorker profile of the author from 2017 mentions a newspaper clipping as part of her research for the book of a different charismatic Catholic group, People of Hope. Newsweek regrets the error.

Insanity Wrap is going to go make a double Bloody Mary for breakfast.

Vacation rental proprietors and second homeowners could face a so-called vacancy tax, which came up Tuesday night during an Aspen City Council work session as a possible funding option for supporting affordable and employee housing in the local workforce.

“There are a lot of different opportunities,” said Mayor Torre on Wednesday.

Insanity Wrap feels the need to remind Mayor Torre that non-resident homeowners already pay the same property taxes as everyone else does, while consuming far fewer city resources.

But that isn’t the point.

The point is, as Torre said, that “there are a lot of different opportunities” to tax the bejeebus out of people who are already heavily taxed.

Previously On Insanity Wrap: Your Racist Lawnmowing Has Got to Stop 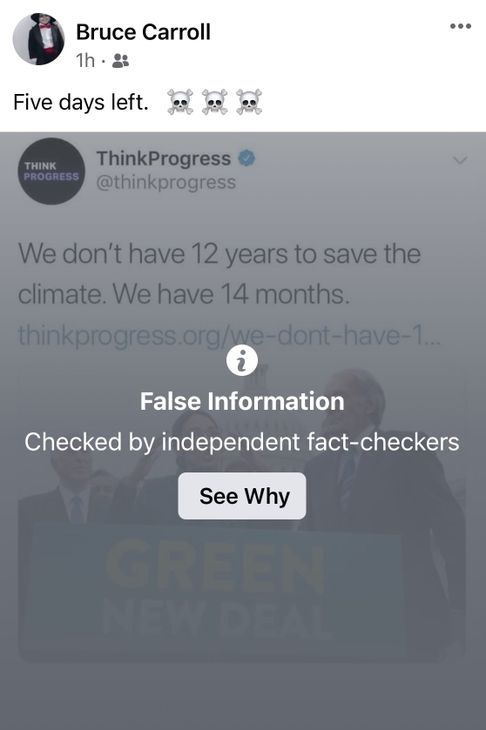 Our friend Bruce Carroll — formerly of GayPatriot and usually banned from Twitter for his unexpurgated conservatism — occasionally reposts this ThinkProgress gem from last year.

And here we are, very nearly 14 months later.

The clock is ticking, comrades!

This time, however, Bruce’s repost earned him a “False Information” ding from Facebook fact-checkers. Too many dings can get you suspended from Facebook.

Insanity Wrap must ask: What is in dispute here?

Is it disputed that Think Progress made this claim?

Is the claim in dispute?

If so, why should Bruce get dinged for reminding people of Think Progress’s disputed claim?

Or is it just that conservatives aren’t allowed to remind people of the Left’s ridiculous claims?

Inquiring minds want to know — but we won’t find answers on Facebook.

UW-Madison students want to cancel Abraham Lincoln and… a rock?

Outrage mobs gotta be outraged about something, and today it’s racist rocks and Abe Lincoln for being anti-black.

The group also called for the removal of a statue of Abraham Lincoln, labeling him “anti-Black” and “anti-Native.” According to the list of “reasons to remove Abe,” the sixteenth president and signer of the Emancipation Proclamation “was not pro-Black.”
…
Skylar Duensing, a student at UW-Madison, told Campus Reform that he has “never heard anyone” refer to Chamberlin Rock as “n***erhead rock.” He said that “despite what it may have been called in the past, removing it at this point would be nothing more than a capitulation to an angry group of people searching for another thing to be angry about.”

Insanity Wrap has just one thing to say to our oppressed college kids: If this is what’s oppressing you, then you aren’t oppressed.

Pick up your books and go back to class, children.

Joe Biden made $15.6 MILLION in the two years after he left office.

But he thought nothing of lying to Detroit workers recently, claiming that $400,000 "is more money than I’ve ever made." pic.twitter.com/CkIcRuYbOP

Insanity Wrap believes that when a scheming mediocrity like Joe Biden can amass such wealth without ever producing a useful product or service, while enjoying tremendous party and structural advantages in pursuit of the most powerful office in America, it is prima facia evidence of just how corrupt Washingon has become.

But then Biden tries to pass himself off as America’s favorite middle-class Democrat, anyway.

Why not brag about it, instead?

Why not make the argument like this: “If someone of my middling intellect and skills can amass a great fortune through nothing more than demagoguery and pandering, then anyone can!”

Maybe it’s because Biden doesn’t want anyone looking too deeply into his finances, the way the Wall Street Journal dared last month.

Joe Biden responded to President Trump’s partial suspension of payroll-tax collections with a statement calling it the “first shot in a new, reckless war on Social Security.” He continued: “Our seniors and millions of Americans with disabilities are under enough stress without Trump putting their hard-earned Social Security benefits in doubt.”

Mr. Biden’s objections might be more persuasive had he and his wife, Jill, not gone out of their way to avoid funding seniors’ entitlement benefits. According to their tax returns, in 2017 and 2018 the Bidens and his wife Jill avoided payroll taxes on nearly $13.3 million in income from book royalties and speaking fees. They did so by classifying the income as S-corporation profits rather than taxable wages.

Biden has never been a great speaker, even when his mind was comparatively sharp.

So Insanity Wrap must ask what could Biden possibly have to say or write that was worth millions?

Biden wasn’t paid for speaking and writing. He was paid by people hoping that he could deliver the goods to them — as Insanity Wrap hopes you already knew — either through his connections in Washington, or especially if he could win the White House.

It doesn’t get much more corrupt than that, and most of the Infotainment industry is helping Biden along because they’re riding the same gravy train.

Insanity Wrap doesn’t usually go in with “THIS IS THE MOST IMPORTANT ELECTION OF OUR LIFETIME!” panic-mongering, but in 2020 we’re certain that it’s true. 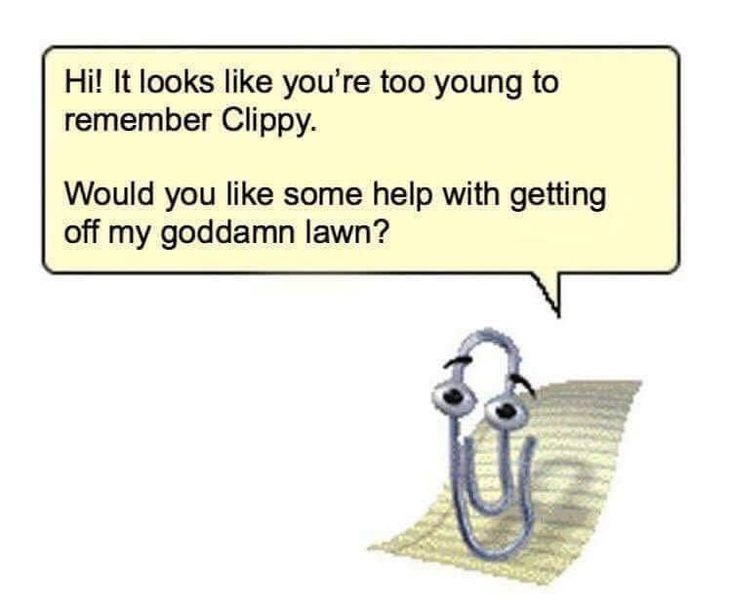 Editor’s Note: Want to support PJ Media so we can continue telling the truth about what the Left is trying to do to our country? Join PJ Media VIP TODAY and use the promo code LOYALTY to get 25% off your VIP membership.

Previously On Insanity Wrap: Crazy Battle as RBG Fights RBG on When to Fill a SCOTUS Vacancy