Insanity Wrap #53: Your Racist Lawnmowing Has Got to Stop

Insanity Wrap needs to know: Is there anything that isn’t racist?

Answer: Certainly not you, racist.

This one is actually from last month, but it just came to our attention today, and according to noxious white person “Cayde,” if you’re white and own a dog, that’s racist.

To be fair, you’re probably racist if you’re white and don’t own a dog.

Shortly after the Eurasian people worked so hard to train and bond with wolves, most of them were shipped off and given to Europeans.

These filthy white savages took the work and credit from the Eurasian people and branded these magnificent creatures as their own.

The need for white people to claim premade or pre-discovered things is not isolated to just this incident. Countless times in history, whites have been caught stealing the work and talent of POC for their own success.

Insanity Wrap has no idea where any of Cayde’s “history” came from, but we do wish he’d put it back.

For what it’s worth Cayde’s bio says he “spends his time creating and disseminating educational materials for local schools that help kids understand why protecting animals and LGBTQIA+ rights is so important.”

UPDATE: It has come to our attention that United Wildlife Union is almost certainly a satire site, to which we can say only: Bravo!

Insanity Wrap doesn’t often get taken in, so when we do we always have the same two reactions. The first of course is an apology to our readers, and the second is a hearty congratulations to the pranksters.

Exit Question: If owning and/or not owning a dog while white makes you racist, is there literally anything left that doesn’t make you racist?

As you’ll see in this next item from our friend Adam Ford at Not The Bee, no.

Previously On Insanity Wrap: Suppose They Made Peace But Democrats Wouldn’t Come?

Mowing the Lawn Is Racist, Too

Is it time to decolonize your lawn?

We wish we were making this up, but alas:

The traditional lawn – manicured, verdant, under control – now finds itself at the confluence of two hot-button issues: climate change and Indigenous rights. Some environmentalists, First Nations leaders and even hobby gardeners are calling for a different approach to how we view and treat the ubiquitous urban green space. It is, they argue, a lasting symbol of how settlers appropriated Indigenous land and culture. And the rigid Western ideal we have imposed continues to hurt the planet and, in turn, all of us.

The correct response to all of this nonsense is a hearty, “Get off my lawn!”

The line is best delivered loudly and while brandishing a shotgun, but Insanity Wrap is certain you knew that already.

Adam Ford has much more at this link, and we do hope you’ll click and support him in his new endeavor.

Especially Beethoven is racist because apparently the entire progressive left is on acid and can see color in sound.

To woke critics, Beethoven’s music has taken on a new, darker meaning. To musicologist Nate Sloan and songwriter Charlie Harding, stars of the “Switched on Pop” podcast produced in association with the New York Philharmonic, the Fifth Symphony is a stand-in for everything they don’t like about classical music and Western culture. As far as they’re concerned, it’s time to cancel Ludwig.

On Vox.com, the pair blame Beethoven’s music for what they consider to be a stuffy elitist classical culture that bolsters the rule of white males and suppresses the voices of women, blacks and the LGBTQ community.

Here’s a thought, free of charge from your daily Insanity Wrap: If you’re that sand-poundingly stupid, maybe you ought to stifle your voice for the sake of humanity.

Karens, Karens Everywhere But Not a Lick of Sense

The divide in America right now is basically between the reasonable man in this video and the insane woman berating him. If you find yourself on the side of the insane woman, you are the bad guy.

We can’t improve on what Matt Walsh said, so we’ll just leave it at that.

Steelers center Maurkice Pouncey posted a note on Instagram on Thursday saying he would no longer display Antwon Rose Jr.’s name on his helmet. Pouncey also offered an apologetic explanation to police departments and officers he has worked with for “not doing more investigating” before wearing Rose’s name during a Monday night game.

You can read Pouncey’s entire apology here, and Insanity Wrap must warn you in advance that it is quite moving.

The Left Wants You Dead

Okay, what in the actual fuck is wrong with these people? pic.twitter.com/pgUJg35l3h

When our friend Kurt Schlichter tells you not to give up your guns because the Left wants you dead, he isn’t being facetious or engaging in hyperbole.

Or at least not enough to matter. 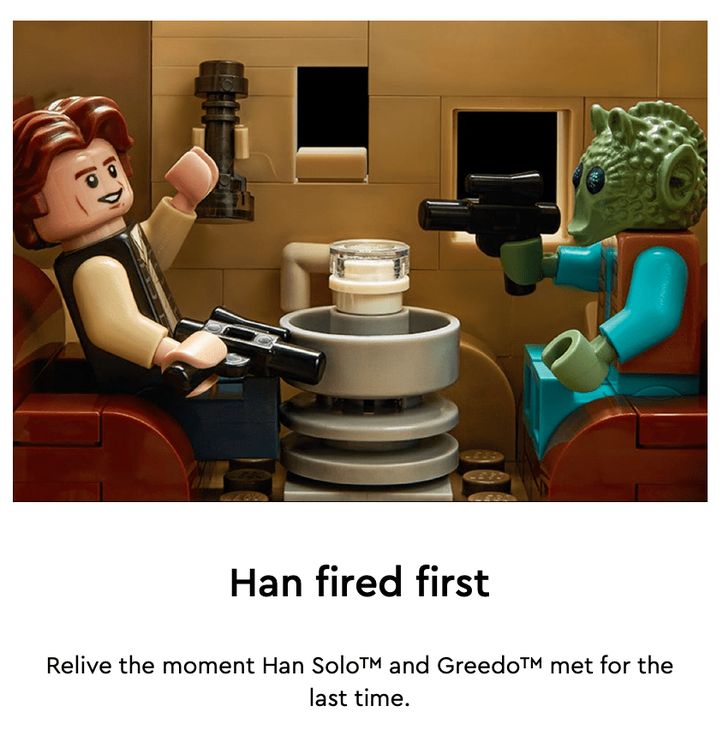 Next month LEGO will introduce another one of their delightfully — not to mention expensively — over-the-top Star Wars sets.

This one is the Mos Eisley cantina, and Insanity Wrap mentions it only because the promotional page shows that even LEGO knows what George Lucas forgot.

Insanity Wrap has no idea who made this, but we do know we’d love to buy them a drink.

Remember: The Left can’t stand ridicule, so do please ridicule away.

You can read the Democratic party platform’s section on “COMBATING THE CLIMATE CRISIS AND PURSUING ENVIRONMENTAL JUSTICE” (all caps in the original) at this link.

If there’s a way to do all they say without raising taxes and imposing huge new costs on everyone, regardless of income, then Insanity Wrap is even crazier than you thought.

Do Yourself a Favor and Skip Past This Next Item

We’re also forced to wonder, given how crazy the world has gotten, whether this …art… is supposed to discourage or encourage Biden/Harris voters.

Insanity Wrap had to see it, and now so do you, Gentle Reader.

Steve launched VodkaPundit on a well-planned whim in 2002, and has been with PJ Media since its launch in 2005. He served as one of the hosts of PJTV, a pioneer in internet broadcasting. He also cohosts "Right Angle" with Bill Whittle and Scott Ott at BillWhittle.com. He lives with his wife and sons in the wooded hills of Monument, Colorado, where he enjoys the occasional adult beverage.
Read more by Stephen Green
Tags: BLACK LIVES MATTER RACISM INSANITY WRAP