Police reportedly took box after box of “evidence,” although it’s unclear what crime Lai might have committed aside from being in favor of democracy and speaking out against the authoritarian Communist government in Beijing.

Apple Daily’s Editor-in-Chief Ryan Law, who was helping film and comment on the Facebook live feed, could be seen rushing about the building as he tried to report on events breaking in his own newsroom.

“This is, I believe, the first time in Hong Kong that police have initiated a mass search on a media outlet like this,” he said, panting, as he scaled a back staircase with a colleague to get around the mass of police officers.

Staffers said they asked police what legal grounds they had for entering. But these questions were largely ignored as more than 200 police streamed in, according to a live feed of the unfolding drama.

Lai had predicted this would happen. Back in May, the New York Times published this op-ed penned by Lai:

I joined Twitter recently, and started posting messages about the new law last weekend, just after the Chinese Communist Party first mentioned it:

Within a day, an article in the official Communist Party mouthpiece Global Times, citing experts, called my tweets “evidence of subversion” under the proposed national security law — this, even before the National People’s Congress formally endorsed the legislation on Thursday.

I have always thought I might one day be sent to jail for my publications or for my calls for democracy in Hong Kong. But for a few tweets, and because they are said to threaten the national security of mighty China? That’s a new one, even for me.

Lai’s Twitter feed is a must-read, and his voice will be missed there as elsewhere. 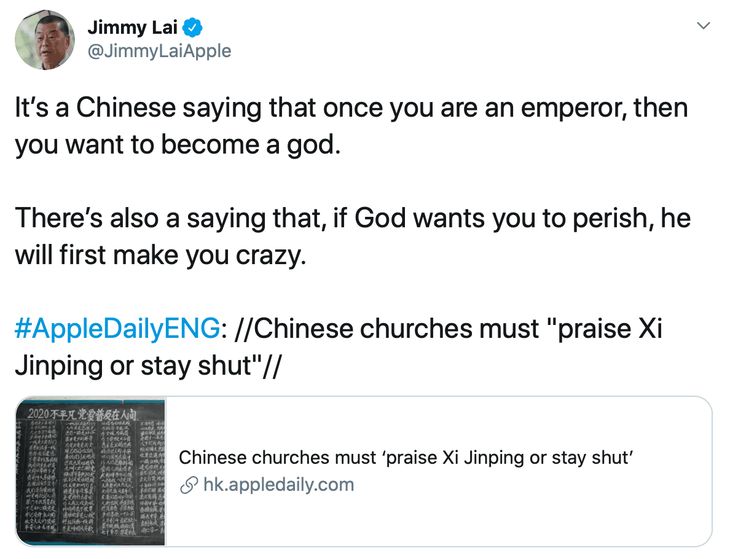 U.S. Senator Ben Sasse, a member of the Senate Select Committee on Intelligence and an outspoken China hawk, said in a statement Sunday:

Democracy needs heroes, and Jimmy Lai used his media empire to advance the cause of freedom in Hong Kong. The Chinese Communist Party hated him for it and didn’t hesitate to declare him a threat to national security. Tech executives in the US and abroad should be disturbed by this news and fully understand who they’re dealing with when they supplicate before the CCP.

The raid was apparently legal under China’s new “national security” law that effectively ended the “one country, two systems” policy. Previously, Hong Kongers had enjoyed most of the same rights they had under more enlightened British rule. Under the handover treaty signed with Great Britain in 1985, the Chinese Communist government in Beijing had agreed to continue respecting Hong Kong sovereignty for 50 years after the 1997 handover.

Hong Kong police said at least nine people between 39 and 72 years old had been arrested on suspicion of violating the new security law, with offences including collusion with a foreign country, but the statement didn’t reveal the names of those arrested. The police didn’t rule out more arrests.

Two of Lai’s sons were among those detained, according to AFP, which cited a police source.

This is not Lai’s first arrest. He was detained in 2014 for taking part in a pro-democracy demonstration, back when Hong Kongers enjoyed far more freedoms than they do now.

Previously, Hong Kongers enjoyed the right to a jury trial in their native city. Under Xi’s national security law, they may be whisked away to mainland China, where “justice” is dished out according to the Chinese Communist Party’s needs.

What happens next to Lai, his sons, and the others arrested today is unknown, but the safe guess is “nothing good.”

Xi signed his “national security” law six weeks ago, despite months of unrest and protest against it in Hong Kong.

The national security law defines subversion as “undermining the power or authority of the central government,” which could mean almost anything. Certainly running a newspaper critical of the Xi regime could be defined as subversive under Xi’s new law.

At least one report claims that Lai was arrested for breaking the law’s blanket “collusion with foreign or external forces” clause, which is another one of those “crimes” that can mean almost anything.

Today, Hong Kong police acted pretty much the way police do throughout the rest of mainland Communist China, using vague laws and a total lack of respect for individual rights to squash dissent.

In other words, it didn’t take very long for Xi to use and abuse his new authority over what was once one of the freest cities in the Far East.