Joe Biden, the alleged Democratic presidential nominee, says he hasn’t and will not take the same cognitive test President Donald Trump “aced” last month, and his explanation shows exactly why he must.

I’ll have the video, the ever-so-useful transcript, and more in just a moment.

But first, a few quick words on what a cognitive test is and isn’t.

As PJ Media’s own Stacey Lennox detailed last week, the Montreal Cognitive Assessment (MoCA) is nothing more than “a short assessment to screen for cognitive impairment” and has been “validated repeatedly for its ability to detect mild cognitive impairment, Alzheimer’s, and other forms of dementia.”

What the MoCA is not is an intelligence test, which arguably Biden might have had a difficult time scoring well on even in his younger days.

Stacey could have been speaking for all of us campaign-watchers when she added:

For the last five months, Joe Biden has rarely left his home. He has not been under the rigors of a typical campaign. He should be pretty well-rested and under less stress than if he were flying nationwide for campaign events. Yet his mental acuity seems worse than it did last fall.

As regular VodkaPundit readers are probably aware, Biden has good days and bad days, much like my great-grandmother did in the early years of her senile dementia.

On his bad days, Biden spouts make-believe as though he honestly remembers it as true, like the story he told two weeks ago about how nurses used to get him going by blowing air into his nose, mouth-to-nasal cavity.

Here’s the clip, on the very off chance that you missed it the first time around.

On Biden’s good days, he still doesn’t make much sense.

In today’s video, Biden puts on one of his stronger video appearances in recent weeks, and yet once again I’m forced to make a transcript to help you make sense of it.

CNN put the nicest possible spin on Biden’s appearance, saying that “Biden clarifies he has not taken cognitive test.” 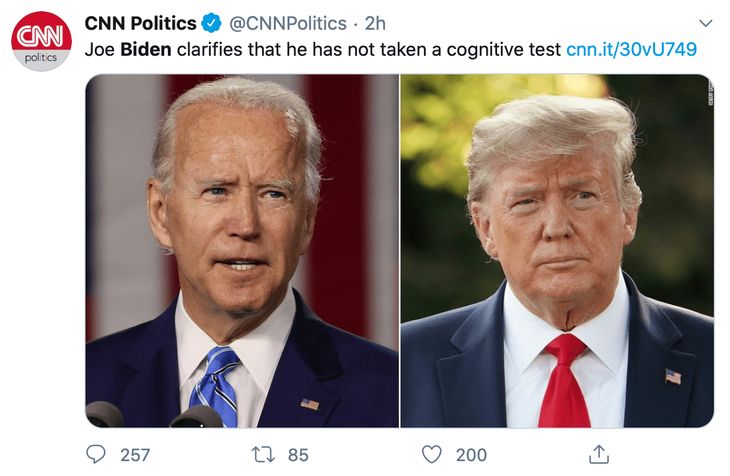 If there’s any clarity to be found in what you’re about to see, science has yet to devise a means of detecting it.

Here’s the transcript. Any errors are my own. Any clarity is accidental.

No, I haven’t taken a test. Why the hell would I take a test?

[LONG PAUSE AS THOUGH FORGETTING WHAT COMES NEXT]

[BIDEN’S FALLBACK PHRASE WHEN HE’S OUT OF WORDS]

That’s like saying you, before you got in this program, if you take a test where you’re taking cocaine or not, what do you think, huh? Are you a junkie?

What are you supposed to test positive or negative for, inquiring minds want to know.

My best guess is that Biden had been given a talking point, a cute little comparison to defuse the issue, but couldn’t manage to tell it correctly.

Then CBS’s Errol Barnett asked the former veep, “What do you say to President Trump, who brags about his test and makes your mental state an issue for voters?”

[MORE OF THAT WEIRD FAKE LAUGHTER] Well… if he can’t figure out the difference between an elephant and a lion, I don’t know what the hell he’s talking about.

What in the actual hell?

Did you watch that? Look, c’mon, man. I-I-I know you’re trying to goad me, but, I mean, I’m so forward-looking to have an opportunity to sit with the president, or stand with the president in debates. There gonna be plenty of time.

I can’t even tell you how many times I’ve already had to tell Grammarly to ignore a mistake I typed correctly out of Biden’s mouth.

And by the way, as I joke with him, you know, [STUMBLE] it… [PAUSE] I-I shouldn’t say. I’m gonna say something I don’t, I probably shouldn’t say. Anyway.

Let’s ascribe those final stumbles to Biden’s stutter, which once you account for the plugs, teeth, tan, and unearned wealth is probably his only genuine attribute.

To sum up the rest: Biden tried and failed to repeat a scripted talking point, followed that up with a nonsensical utterance about African wildlife, accused his softball interviewer of trying to goad him, then said he’s looking forward to a debate where he might sit or stand, and then claimed he can’t say what he wants to say.

This, I must repeat, is one of Punxsutawney Joe’s stronger appearances in recent weeks.

If that isn’t cause enough for Biden to take a cognitive test, then what is?

Slow Joe Biden Gets Lost in a Gym

Steve launched VodkaPundit on a well-planned whim in 2002, and has been with PJ Media since its launch in 2005. He served as one of the hosts of PJTV, a pioneer in internet broadcasting. He also cohosts "Right Angle" with Bill Whittle and Scott Ott at BillWhittle.com. He lives with his wife and sons in the wooded hills of Monument, Colorado, where he enjoys the occasional adult beverage.
Read more by Stephen Green
Tags: 2020 PRESIDENTIAL ELECTION JOE BIDEN
SHOW COMMENTS