The Burning of USS Bonhomme Richard and Our Shockingly Brittle Navy

The amphibious assault ship USS Bonhomme Richard (LHD-6) — an aircraft carrier in all but name — is almost certainly lost, a burned-out useless hulk lost during peacetime in American home waters.

While the Navy has not yet said whether or not they’ll attempt to repair the Bonhomme Richard and return her to service, “the situation does not look good,” according to The Diplomat’s Robert Farley.

It does not appear that the Bonhomme Richard can be economically returned to service. High heat from long-burning fires may well have caused significant structural damage that would be extremely expensive to repair. Eleven of the ship’s 14 decks have suffered fire or water damage, or both. The superstructure and some of the decks are gutted.

Perhaps most disturbing about the loss of the Bonhomme Richard is the structural weaknesses revealed in our modern Navy.

What caused the fire to break out is still unknown, as is how it spread so quickly. American warships are robust, and their crews have been trained for decades with this one thought: “Every sailor a firefighter.”

During the Second World War, U.S. Navy crews earned a tough reputation for saving ships other fleets — particularly the Imperial Japanese Navy — would have lost to enemy fire.

Not only are the Navy’s damage-control practices legendary, but so are the miracles sometimes performed to turn damaged ships around at drydock and get them back in the fight.

The most famous example might be the aircraft carrier USS Yorktown (CV-5), commissioned years before WWII broke out and then lost at the Battle of Midway.

Just getting the Yorktown to Midway was the stuff of legend.

Yorktown had teamed in early May of ’42 with the USS Lexington to fight off the Japanese invasion of Port Moresby, Papua New Guinea, just north of Australia.

During the resulting Battle of the Coral Sea, Lex was damaged so badly by aircraft from the Japanese carriers Shōkaku and Zuikaku that she had to be scuttled by her crew.

Yorktown was hit by only one Japanese bomb, but it was a helluva hit, penetrating the flight deck and killing or wounding scores of sailors. Worse, the explosion took out her boilers. It took nearly three weeks for Yorktown to limp back to Pearl Harbor on May 27 for repairs estimated to take three months.

Three months was approximately two months and 28 days longer than they had.

The Japanese were coming for Midway, and U.S. Pacific Fleet Commander Admiral Chester Nimitz planned to lay a trap for them.

For the trap to work, every flight deck was needed, including Yorktown’s.

And so Yorktown spent a mere 48 hours in drydock, where repair crews got her back in fighting trim faster than should have been humanly or even physically possible. 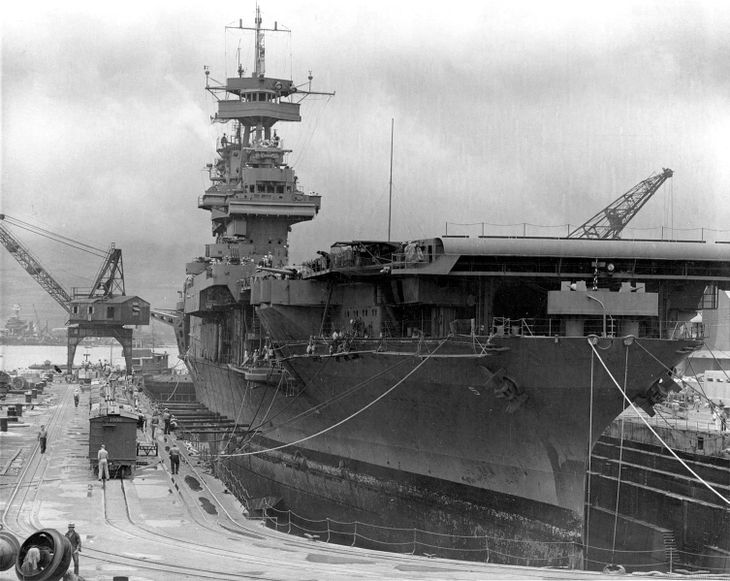 Because sinking bad guys is what our Navy does in wartime.

Or at least that’s the way it was, and the way it’s still supposed to be. But before we get to that, we need to spend a few more words on the Battle of Midway in order to better understand what our modern Navy might have lost.

Thanks to MAGIC decrypts, Nimitz knew the Japanese were coming and with what forces. All four of the IJN’s undamaged fast carriers — the beating heart of Japanese naval power — were coming for Midway. In part to take the island, in part to draw out and sink America’s remaining aircraft carriers.

The IJN’s excruciatingly complex battleplan was the brainchild of Admiral Isoroku Yamamoto, who believed the Americans were demoralized and would have to be tricked into sending our remaining carriers out to battle.

Yamamoto was so convinced of our precarious position that he refused to even wargame the possibility that Nimitz might be spoiling for a fight. As detailed in the excellent Shattered Sword: The Untold Story of the Battle of Midway, it occurred to one or more of Yamamoto’s underlings that Nimitz could possibly prepare an ambush of the Japanese carrier force known as the Kidō Butai. They wanted to wargame that scenario to prepare the officers of the Kidō Butai for such an eventually, but Yamamoto wouldn’t hear of it.

Yamamoto was a habitual gambler, maybe even a gambling addict. Addicts will keep throwing the dice until they go bust, unable to control themselves. Yamamoto threw the dice at Midway — and lost.

Nimitz was an aggressive fighter, but he always calculated the odds before committing to a fight. The Japanese would have four carriers to his three, but his carriers held more warplanes, and the U.S. airfield at Midway could provide additional aircraft.

Nimitz also counted on the element of surprise, a gift given to him both by MAGIC and by Yamamoto’s refusal to countenance any contingencies outside of his own battleplan.

Nimitz liked his odds. Yamamoto never bothered to figure out what his odds might be.

At the end of the three-day running battle, the Yorktown had been sunk, finally damaged too badly by a torpedo strike to be saved once more. In addition to the Yorktown, the U.S. lost a destroyer and 150 aircraft for a total of 304 killed and three captured.

The Japanese lost all four of their carriers, plus a heavy cruiser, and 248 planes. More than 3,000 Japanese sailors, airmen, and officers were killed.

Worst of all for Japan, their meager shipbuilding capability prevented them from ever replacing even one of those lost carriers. American shipyards would, by the end of the war, build and send into battle around 20 Essex-class carriers each more powerful than the lost Yorktown.

One of those Essex-class carriers was named — you guessed it — Yorktown. Another was named Bonhomme Richard, just like the Wasp-class amphibious assault ship the Navy lost to fire in San Diego last week.

The reason I walked you through all this was to demonstrate four you three things:

• The Navy’s almost inhuman ability to save burning ships

Add all three together, and we had a Navy of enormous resiliency.

However, the loss of the Bonhomme Richard reveals that we no longer possess any of those things.

Small budgets, loss of shipbuilding capacity, and some terrible procurement decisions have forced the Navy to eat its seed corn, and now we must pay the price.

In the same article linked above, Robert Farley details the “nightmare that will continue to torture the U.S. Navy for a good long while.”

As Jeff Schogol relates, the United States has very few areas in which it could repair the Bonhomme Richard, and no room on the construction schedule to replace it. This has sparked broader concerns about the ability of the U.S. Navy to repair battle damage on existing ships, as well as to replace any wartime losses.

So we probably don’t have the resources to repair Bonhomme Richard, and even if the Navy could scrape everything together, we couldn’t repair her without delaying scheduled maintenance, repairs, and upgrades to other ships in the fleet.

Complicating matters, the loss of Bonhomme Richard will mean other ships will deploy longer or more often, decreasing morale and increasing maintenance and repair on ships seeing too much service.

Replace the Bonhomme Richard? Unlikely. Our shipyards are already booked up trying to build up to a 355-ship fleet, up from a little less than 300.

And yet it was only 30 years ago the Navy had nearly 600 ships, supported by an economy literally half the size it is today. We’re wheezing with the current effort because the Navy no longer has that resiliency it once enjoyed — and required by a maritime trading nation like our own.

Our Navy’s structure has instead been revealed to be quite brittle — unable to save, repair, or replace a single major warship even at a leisurely peacetime pace.

The Bonhomme Richard was one of only four assault ships ready (or nearly so) to launch the F-35B stealth attack jet. As such, she was a vital part of our ability to project power in the Pacific Ocean, at a time when Communist China is radically increasing its ability to project its own power.

It’s going to take years, massive political will, and untold billions of dollars to correct decades of neglect, but the alternatives are all worse.

Chinese Communist strongman Xi Jinping might look at the burning wreck of the Bonhomme Richard and then back at his own growing seapower, and decide sometime in the years ahead he needs to roll the dice like Yamamoto.

Should that awful day come, we’re going to need ships like Bonhomme Richard and men like Chester Nimitz.

Steve launched VodkaPundit on a well-planned whim in 2002, and has been with PJ Media since its launch in 2005. He served as one of the hosts of PJTV, a pioneer in internet broadcasting. He also cohosts "Right Angle" with Bill Whittle and Scott Ott at BillWhittle.com. He lives with his wife and sons in the wooded hills of Monument, Colorado, where he enjoys the occasional adult beverage.
Read more by Stephen Green
Tags: NAVY