Disgraced former Congressman Michael Ozzie Myers (D-Penn.) is staring at a laundry list of federal criminal charges starting with conspiring to violate voting rights, according to a statement released Thursday by the U.S. Justice Department.

The conspiracy charge is tied into “stuffing the ballot boxes for specific candidates in the 2014, 2015, and 2016 primary elections, bribery of an election official, falsification of records, voting more than once in federal elections, and obstruction of justice,” the DOJ revealed.

Myers, a Philadelphia-based two-term Democrat, is charged with conspiring with and bribing Domenick J. Demuro, a former Judge of Elections for the city’s 39th Ward, 36th Division. Demuro previously pleaded guilty in federal court for his part in the criminal conspiracy, and who DOJ says “was responsible for overseeing the entire election process and all voter activities of his division in accord with federal and state election laws.”

Oops. Missed it by that much.

Myers is charged with bribing Demuro to illegally add votes for certain candidates of their mutual party in primary elections. Some of these candidates were individuals running for judicial office whose campaigns had hired Myers, and others were candidates for various federal, state, and local elective offices whom Myers favored for a variety of reasons. According to the indictment, Myers would solicit payments from his clients in the form of cash or checks as “consulting fees,” and then use portions of these funds to pay Demuro and others in return for tampering with election results.

Myers was charged on Tuesday but the indictments weren’t unsealed until today.

The Department alleges that:

After receiving payments ranging from between $300 to $5,000 per election from the consultant, the court papers allege Demuro would add fraudulent votes on the voting machine – also known as “ringing up” votes – for Myers’ clients and preferred candidates, thereby diluting the value of ballots cast by actual voters. At Myers’ direction, Demuro would add these fraudulent votes to the totals during Election Day, and then would later falsely certify that the voting machine results were accurate. Myers is also accused of directing Demuro to lie about the circumstances of the bribes and the ballot-stuffing scheme to investigators.

What really makes this case interesting is that it’s hardly the first run-in Myers has had with the law. 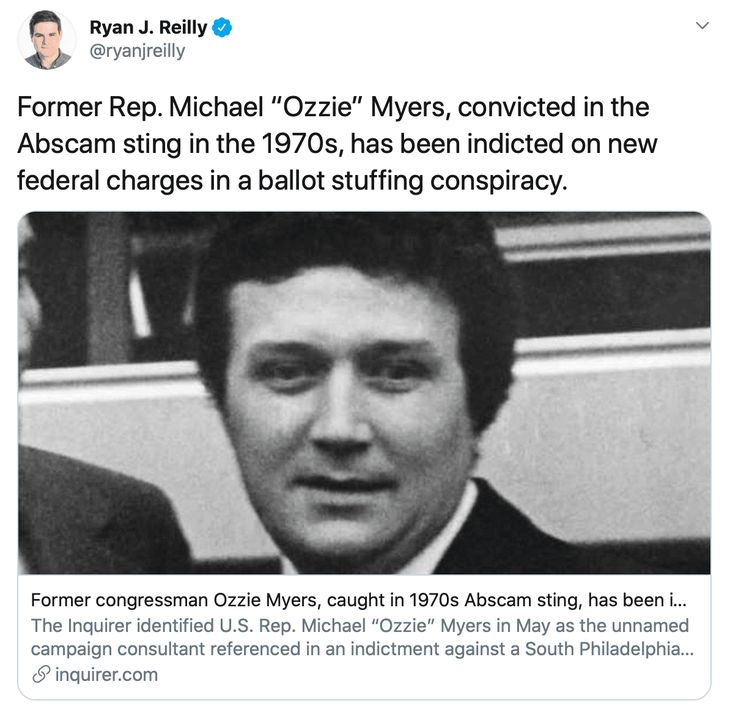 Abscam was an FBI sting operation in the late ’70s and early ’80s in which six congressmen were convicted of bribery and corruption, including Myers.

From the FBI’s official history:

It all started in July 1978, when we set out to catch New York City underworld figures dealing in stolen art. We set up a bogus company in Long Island—Abdul Enterprises, thus the name “AB(dul)SCAM”—said to be owned by a wealthy Arab sheik who wished to invest oil money in valuable artworks. Then, we recruited an informer who connected us with crooks willing to sell us stolen treasures. It worked. Within months, we’d recovered two paintings worth a combined $1 million.

Through that operation, we were introduced to criminals who were dealing in fake stocks and bonds. Again, success. Our undercover work ended up halting the sale of nearly $600 million worth of fraudulent securities.

From there, our investigation led to southern New Jersey and on to Washington, D.C. Our criminal contacts led us to politicians in Camden who were willing to offer bribes to get our “business” a gambling license in Atlantic City. Then, when we expressed interest in their suggestion to get the sheik asylum in the U.S., these corrupt politicians arranged for us to meet some U.S. Congressmen who could make it happen with private legislation. For a price, of course: $50,000 up front and an extra $50,000 later.

One of my earliest political memories, around age ten, was watching the FBI’s undercover video on the evening news.

Prior to his three-year prison sentence for accepting the $50,000 Abscam bribe, Myers had received a six-month suspended sentence after pleading down an assault and battery charge to disorderly conduct. Myers had assaulted a motel security guard and 19-year-old female cashier who had told him to keep his party quiet. Myers reportedly said during the altercation, “I’m a congressman: We don’t have to be quiet.”

What’s remarkable is the depth of political corruption on display from our Democratic friends in Philly. Myers wasn’t just violent and corrupt, but in 1980 he became the first House member to be expelled since 1861 by a vote of 376 to 30.

And yet our Democratic friends in Philly thought it was a fine idea to hire him as a political consultant.

Were they shocked, shocked to hear of his indictments today, or did they understand exactly what they were paying for?