Insanity Wrap #9: the Terrifying Portland Apocalypse, and Hitler Was Kind to Black People

And the answer is: Before he gets a chance to commit genocide against your people instead just against those other people.

I guess the thinking is, “What’s 12 million dead Jews, gypsies, gays, cripples, and other Untermenschen among friends?”

Before we get to that, a quick preview of today’s Insanity Wrap.

But Back to That Hitler thing…

It was a lovely summer Sunday afternoon when Insanity Wrap fell down a rabbit hole of postmodern thinking, in which we learned that Hitler isn’t considered that bad. 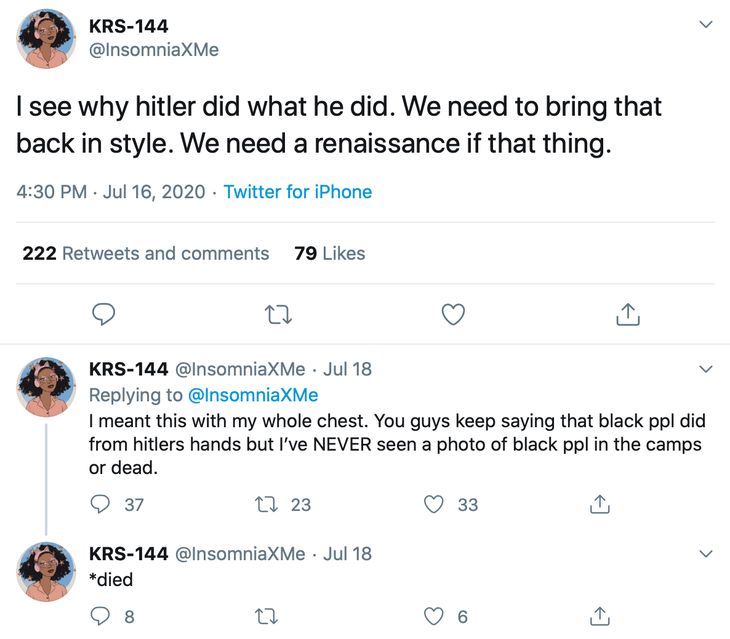 Insanity Wrap’s first instinct was to treat this tweet as a one-off, especially after the author deleted it. And then they — or Twitter — deleted the entire account.

But, curiosity piqued, a deep dive was almost inevitable.

Sure enough, there’s a strain of thought on the American Left — shall we call it Black Supremacy? — that blacks are the real Jews. So the fake Jews deserve whatever Hitler could dish out, we suppose.

This belief that blacks are the real Israelites wasn’t new to Insanity Wrap. Using it to excuse Hitler, was.

“LOL” at the justifiable genocide.

Really, after decades of excusing Stalin and his many crimes against humanity including a near-genocide on Ukraine’s kulaks, it was a small leap to find excuses for Stalin’s one-time ally in the socialist cause, Adolf Hitler.

If you’ll allow us to paraphrase the late, great Tom Wolfe: The dark night of fascism is always descending in the United States and yet lands only on the American Left.

They’re very nearly there, too.

Saturday evening, two groups of antifa and Black Lives Matter rioters terrorized Portland, squaring off against police and federal troops. One group attacked the Portland Police Bureau’s North Precinct and the Portland Police Association (PPA) — the police union — while the other group targeted the federal courthouse and Justice Center, returning to set yet another bonfire at the ruins of the elk statue nearby. Antifa broke into the PPA and set it on fire. Before the violence began on this 51st day of unrest in Portland, Mayor Ted Wheeler (D-Portland) decided to hamstring federal troops, aiming to prevent local law enforcement from teaming up with them.

If you ask Insanity Wrap, Mayor Wheeler is essentially leading — or at the very least abetting — an insurrection.

This is textbook stuff right out of Lenin’s playbook, in which a trained cadre of devoted Marxist thugs prey on the public’s fears and animosities to make a city (or even a country) ungovernable.

Once that happens, the people become willing or even eager to give up their current form of government for something new.

Wheeler would be instantly recognizable to Lenin as part of the “vanguard of the proletariat.”

The New York Post editorial board argued on Sunday that Portland “is somewhere between riot and insurrection, and demands a strong federal response even if local officials are in denial.”

Local officials aren’t in denial. They’re in on it and hoping to profit politically from it.

Insanity Wrap started off on the “let it burn” end of the scale, but we’re beginning to move over to the side that says, “time to enforce 18 U.S. Code § 238.”

Whoever incites, sets on foot, assists, or engages in any rebellion or insurrection against the authority of the United States or the laws thereof, or gives aid or comfort thereto, shall be fined under this title or imprisoned not more than ten years, or both; and shall be incapable of holding any office under the United States.

Which side of the scale do you find yourself on lately?

Goes on a racist tirade against her republican challenger

We promised you race-traitor sex organs, and we deliver.

Here is Monica Cannon-Grant, a campaign organizer for congresscritter Ayanna Pressley (D-Mass.) and a #BLM activist.

Insanity Wrap is just old enough to remember when racists told people they couldn’t sleep with or love other people because of the color of their skin, and today those memories are flooding back.

Apparently there’s a market for that kind of thing, too:

There are plenty of videos in circulation showing Cannon-Grant using racist language towards white people and dehumanizing language towards police. This is a woman whose archaic world view should not be accepted in a civilized society. Yet she is treated as a civil rights icon and a community leader by some of the most powerful politicians in Massachusetts. Joe Kennedy courted her endorsement. Pressley, Rachael Rollins, Elizabeth Warren, and Maura Healey have all campaigned with her. Marty Walsh gave her a 4,000 square foot building for free, after she repeatedly called him a “mother f***er.” She has been praised by several Boston City Councilors including Michelle Wu, Andrea Campbell, and Julia Mejia, and as we will see later on they financially support her.

We miss the days of “Can’t we all just get along?”

As always, Insanity Wrap insists on finishing up on a lighter note…

This Explains Everything, and It’s Funny, Too

When Wokes and Racists Actually Agree on Everything. pic.twitter.com/Z9SlfscUjQ

Watch the whole thing. If you miss the last gag, you missed the best gag.

So many laugh-out-loud moments because, as the wise man once said, only the truth is funny.

Why, it’s almost as though racists and wokes are just two sides of the same collectivist coin.

That’s a wrap for Monday. Come back tomorrow for another Insanity Wrap…