John Hickenlooper, former Colorado governor and current Democratic Senate hopeful, was found in violation of state ethics laws while serving as governor and will be forced to pay a paltry fine.

The Colorado Independent Ethics Commission, a body mandated by the state constitution, found Hickenlooper had broken state gifting laws on two out of six complaints and has been fined $2,750.

While the fine is practically pocket change for the entrepreneur-turned-politician, it is the largest ever imposed by the Ethics Commission.

Maybe the Commission was still sore — as they very well should have been — after Hickenlooper ditched their subpoena two weeks ago, forcing an unprecedented showdown. For that, the panel found Hickenlooper in contempt, something for which they did not impose any penalty.

The six ethics complaints involved private or semiprivate trips Hickenlooper took as governor, which were paid for by private companies. The state limit of private gifts to public office holders at the time was $59.

Travel included a trip to Turin, Italy, for the Bilderberg Meeting; another trip to Connecticut for the commissioning of the USS Colorado; a private trip to New Jersey (yes, New Jersey); a wedding in Texas; and a work + pleasure trip to Jackson Hole, Wyoming, for an American Enterprise Institute symposium.

The lion’s share of the fines was a $2,200 penalty for the trip to Connecticut. On that trip, Hick traveled on a jet owned by billionaire Larry Mizel’s company, MDC Holdings. The fine was approved on a 4-1 vote.

On another 4-1 vote, the commission imposed a $550 fine for Hickenlooper’s Bilderberger trip to Turin.

Hickenlooper had no need for any travel to the commission’s hearing since it was held virtually. In response to the coronavirus lockdowns, the Ethics Commission has been holding its hearings from home using videoconference software.

The Senate hopeful’s legal counsel argued that “the hearing’s remote format violates his right to face his accusers in person,” but a Denver District Court judge disagreed and upheld the subpoena.

Nevertheless, even after the Ethics Commission sent a “team” to compel Hickenlooper’s virtual appearance, he remained AWOL and in violation of the court’s order.

The impact of the controversy became apparent this week after back-to-back debates between Hickenlooper and Andrew Romanoff, a liberal former state representative.

Hickenlooper found himself playing defense for much of those debates, struggling to explain an ethics commission ruling that found that he had twice violated the state’s ban on public officials accepting gifts as governor.

Greenwood also reports that Hickenlooper “accepted responsibility” for his ethics violations. Contrary to that, he and his campaign still claim that the charges were a political hit job by the right-leaning Public Trust Institute, which he called “a Republican dark money group.” Hickenlooper says they were “focused not on the facts but on political smears.”

Further distancing himself from any sense of personal responsibility for his settled ethics violations, he accused “Republicans of trying to weaken him ahead of the November elections with the allegations,” according to Greenwood.

Engaging in politics during an election? Why I never! 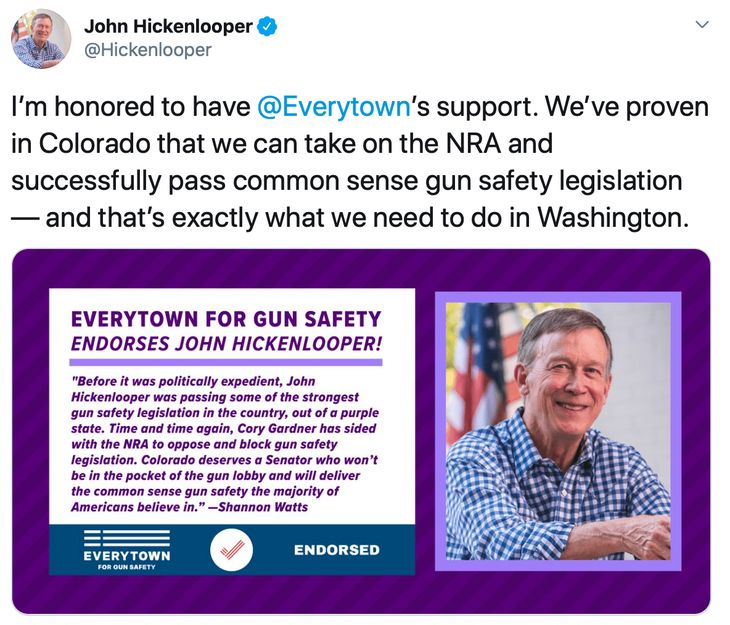 In last week’s debate, Romanoff said, “John Hickenlooper just wrote the Republicans’ ad against him twice now,” and called on the former governor to withdraw from the race.

Democrats will hold their Senate primary election in just two weeks to select who will take on the incumbent Republican, Cory Gardner. The hotly contested Colorado race is considered a must-win for both sides with control of the Senate up for grabs in November.

Colorado has been trending left in recent years, and hard-left in just the past two years.

Maybe the best result is that a weakened Hick still wins the Democrats’ nomination, but that his ethics problem drags him down on election day.