Protestors overwhelmingly fear that they’ll spread the sometimes-deadly Wuhan coronavirus, but continue to protest anyway. A new Axios-Ipsos survey reveals that by a massive 6.5-to-1 margin, Americans believe that there is a moderate to large risk of getting a nasty COVID-19 infection by “going to protests, demonstrations.”

Margaret Talev wrote for Axios that “more than one in 10 people surveyed has an immediate family member or close friend who’s participated” in the protests and/or riots. And 2% say they’ve “taken part themselves.” That, she says, “puts tens of millions of people in close contact with protesters.”

Their concerns are probably spot-on — but that might not be a bad thing, as you’ll soon read.

Deborah Birx, Trump’s coronavirus response coordinator, relayed fears that the yelling by protesters could potentially negate the health benefits of wearing a mask, and that the destruction of testing sites at those protests would set back efforts to contain the virus’ spread. Birx said 70 such sites had been destroyed, which had already resulted in an appreciable drop in testing rates there. She advised governors to “scramble now to make sure there is testing available in urban areas.”

It doesn’t come as much surprise that spittle-spewing protestors might not be enjoying all the benefits of wearing a mask at large public gatherings, but the part about the testing sites would be comical if it weren’t so disturbing.

How, exactly, governors are supposed to increase testing in urban areas that have fallen under the control of “protestors” who destroy testing centers is not an issue Birx seems to have addressed. Like retailers who might never come back to the big city neighborhoods that torched them, those demolished testing sites could be gone forever.

Talev also claims that protestors are “taking steps to avoid spread,” with 87% saying they wore masks, 35% claiming to have worn gloves, and 33% saying they maintain proper social distancing.

As someone who has seen a lot of video and photos of the protestors and/or rioters, I’m going to dismiss those claims with severe prejudice. You might, too, after watching news reports like this one:

There is a potential upside, however. In her latest USA Today column, Virginia Postrel notes:

The unspoken plan was always that, one way or another, enough people would come down with COVID-19 for the pandemic to burn itself out. Along the way, if we were lucky, enough effective treatments would be developed to dampen the fatality rate. Either way, we’d achieve herd immunity without ever admitting that was the only viable option.

By infecting many more people, who will take the virus home with them, the protests will accelerate that process.

I’d recommend reading the whole thing, except that Postrel — and I’ve been reading and enjoying her stuff for decades — is in this one strangely alarmist and needlessly partisan.

Americans are much more evenly split on the risks of once-ordinary activities like going to work, eating out, or getting a haircut. And at least one strange case in Missouri bears that out. 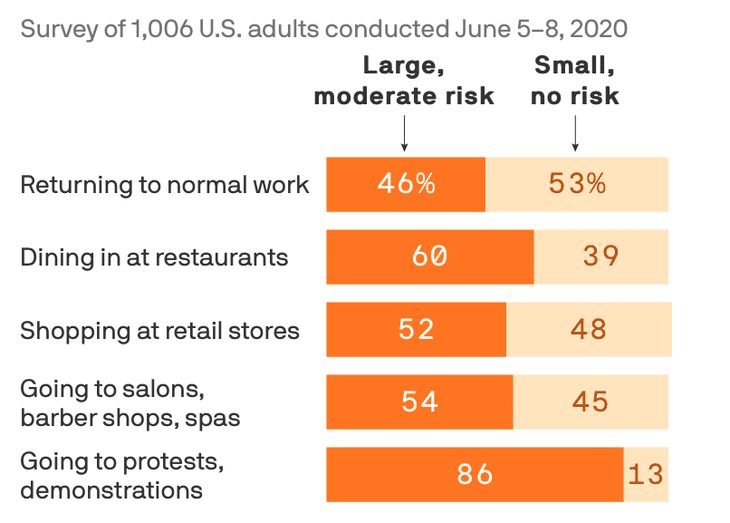 Health officials in Springfield, Mo., reported zero new COVID-19 infections “after two hairstylists potentially exposed 140 customers and six coworkers” to the coronavirus at a local Great Clips. About a third of those exposed have already been tested with no positive results for coronavirus infection.

It’s too early in the protest cycle to draw any firm conclusions. However, it might be that hairdressers trying to earn a living are a bit more circumspect about COVID-19 risks than angry street protestors are. I’ve had three haircuts in recent weeks, and each one involved everyone wearing masks, and even my temperature being taken at the door and then written down for contact tracing purposes.

Not to be too arch, but I doubt you’ll find much of that going on at your typical protest where dangerous antifa anarcho-fascists mingle with protestors, and almost everyone is too angry to show much good sense.

My takeaway from all these reports is quite simple: If protestors are free to take their chances to demonstrate their zeal over an important social issue, then you should be free to take your chances on a haircut and a hamburger.