Univ. of Alabama Prof Coaches Rioters on How to Destroy Birmingham Monument

University of Alabama professor Sarah Parcak took to Twitter on Sunday night with a “professional hot take” on exactly how a mob could pull down an Egyptian-style obelisk that “might be masquerading as a racist monument,” such as the Confederate war dead memorial in Birmingham, Alabama.

Parcak, the author of Archeology from Space, a Guggenheim Fellow, and a public speaker, explained to her fifty-three thousand followers and the rest of Twitter how a semi-organized crew, armed with little more than rope, chain, and bad intentions, should let “gravity work 4 you” when toppling obelisks “just like this in downtown Birmingham!” 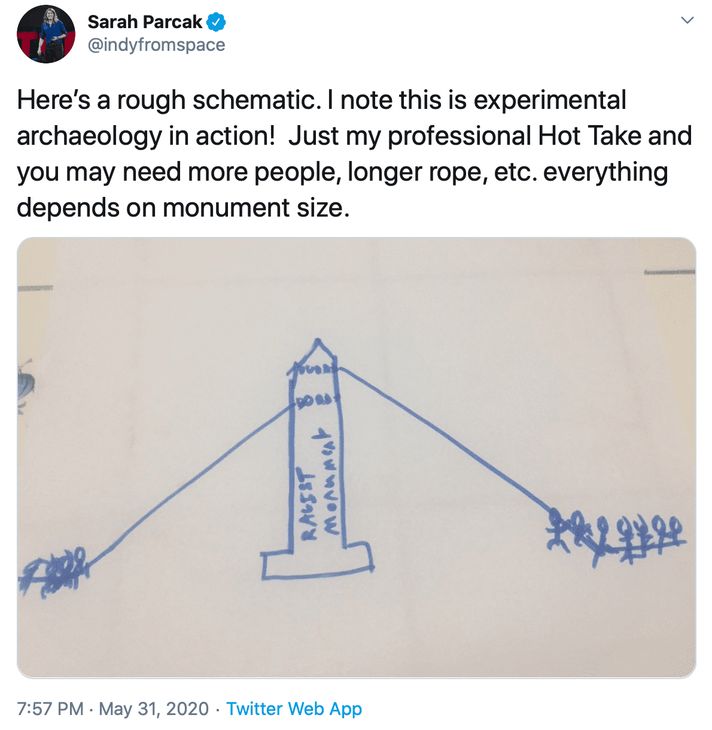 You think maybe Parcak is taking academia’s deconstruction movement a bit too literally?

Whatever the case, Parcak clearly knows what she’s talking about, which makes me think she might be talking herself into some legal trouble. A quick look at her 15-post Twitter thread gives explicit instructions on exactly how to destroy an obelisk and makes clear her intent that the George Floyd-inspired rioters should succeed where they had previously failed. 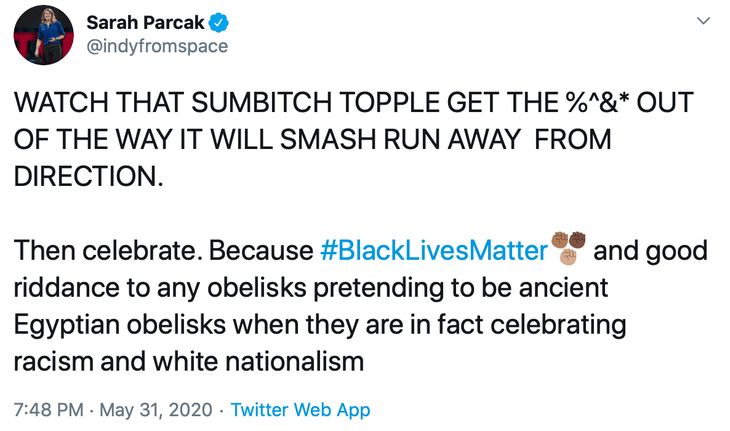 Earlier on Sunday, rioters took to Birmingham’s Linn Park, determined to tear down the Confederate war dead memorial, which just happens (cough, cough) to be an obelisk.

George Linn Statue was tore down. The Confederate Veterans Obelisk wouldn’t budge but Mayor Woodfin has promised to take it down within 24 hours. pic.twitter.com/G0Mq8zDGoJ

Kyle Whitmire was a witness and describes what happened in an otherwise unreadable Alabama.com editorial:

When I got there, a couple hundred protesters had gathered and a handful were already chipping with sledgehammers at the base of the century-old statue.

As the sun set, more people trickled into the park. A few folks wrapped bungee lines around the monument and rope line pulled in vain against the 50 ft. tower of solid granite. Johnson and other leaders of the group admonished the crowd against damaging any other property.

The amount of thought that went into this enterprise could be measured in feet — roughly 30 ft of rope to pull down a 50 ft. monument. The protesters looped one end of the rope about a third of the way up the obelisk and hitched the other end to the back of a red GMC pickup truck. Had they been successful, the monument would have crushed the truck and likely killed or injured bystanders. Instead, their two attempts ended with two broken ropes.

Parcak reminded the, ah, peaceful protestors that the “chances are good the obelisk extends into the ground a bit,” so they should use chains instead of a rope. The chains should be “extended tightly around the top (below pointy bit) and 1/3 down forming circles.”

“For every 10 ft of monument, you’ll need 40+ people. So, say, a 20 ft tall monument, probably 60 people,” Parcak helpfully suggested. With “safety first” in mind, she said that rioters will “want strong rope attached to the chain—rope easier to hold onto versus chain.”

Parcak was so vivid with her next instructions that readers can practically see the monument being torn down.

You probably want 150+ ft of rope x 2…you’ll want to be standing 30 feet away from obelisk so it won’t topple on you (your safety! first!). This gives enough slack for everyone to hold on to rope, alternating left right left right. Here’s the hard part…pulling in unison

You have two groups, one on one side, one opposite, for the rope beneath the pointy bit and the rope 1/3 down. You will need to PULL TOGETHER BACK AND FORTH. You want to create a rocking motion back and forth to ease the obelisk from its back.

I recommend a rhythmic song. YOU WILL NEED SOMEONE WITH A LOUDSPEAKER DIRECTING. There can be only one person yelling. Everyone will be alternating on rope left right left right not everyone on the same side. No one else near the obelisk! Safety first!

Just keep pulling till there’s good rocking, there will be more and more and more tilting, you have to wait more for the obelisk to rock back and time it to pull when it’s coming to you. Don’t worry you’re close!

Nevertheless, Parcak indulges in a little CYA action at the end of her violent-inciting rant:

In her final message in this thread, Parcak also asked rioters, “Please do not pull down Washington Monument,” but at this point, that sounds more like thinly-disguised irony than an actual plea not to do anything destructive.

Besides, one monument to “racism and white nationalism” looks just like another, AMIRITE?

While I don’t think anyone would be stupid enough to try to topple the 555-foot Washington Monument, the 52-foot tall obelisk in Birmingham seems a likely target for rioters — encouraged and instructed by a member of the academy.

Parcak ought to face charges.