The California-based electric automaker has had a good run lately, ramping up to volume production of somewhat more affordably-priced cars, and finally realizing profits on the strength of Model 3 sales. But as you may have already read, Musk has been frustrated with California’s Wuhan virus lockdown. Just as his company is starting to do what he set out to accomplish, his Fremont plant has been shuttered.

Frankly, this is the final straw. Tesla will now move its HQ and future programs to Texas/Nevada immediately. If we even retain Fremont manufacturing activity at all, it will be dependen on how Tesla is treated in the future. Tesla is the last carmaker left in CA.

As PJMedia’s own Bryan Preston noted on Saturday, “Musk has called the shutdown and lockdown orders fascist and has become increasingly public in opposing them.”

Gonzalez is a wholly-owned subsidiary of California’s labor organizations who would happily destroy a million jobs if it would create just one more labor position. As if AB5 weren’t bad enough, Gonzalez’s R-rated tweet might have put Musk over the edge on whether to move Tesla out of California. On Saturday, Musk let it be known — via Twitter, naturally — that Alameda County’s “Interim Health Officer” was… well, read it yourself.

Tesla is filing a lawsuit against Alameda County immediately. The unelected & ignorant “Interim Health Officer” of Alameda is acting contrary to the Governor, the President, our Constitutional freedoms & just plain common sense!

It remains to be seen whether the notoriously mercurial Musk will actually follow through on his threat to move Tesla’s HQ and future operations to Texas and Nevada, much less close down the Fremont plant and move it elsewhere, too. But if he does, he’ll get a lot of support from people frustrated with Gonzalez and her job-killing ways. 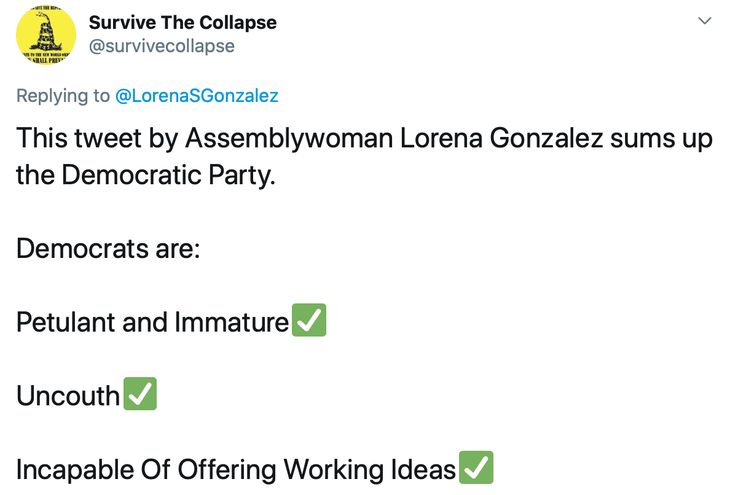 California has in the last two decades chased the middle class out of the state through a combination of small-business killing regulations and unaffordable housing. Now they’re killing off the gig economy and much of the creative industries like live music with AB5. Still not satisfied, Gonzalez seems determined to personally kill off the last remnant of California’s auto industry. The result — California is home to 1 in 9 Americans but 1 in 3 welfare cases — speaks for itself.

Gonzalez claims to be a friend of the workingman. What a shame that thanks to her and her party there are so few of them left.