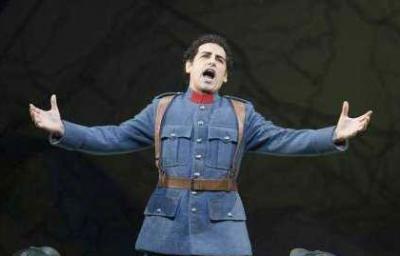 A short chapter of opera history is being written by the current cast and production of the Gaetano Donizetti comedy opera “La Fille du Régiment” (The Daughter of the Regiment). Monday night during the opening performance at the Met, tenor Juan Diego Florez elicited a rare encore and an unheard-of standing ovation from the audience, all before the end of the first act. Last year at La Scala a similar encore by Florez was granted to the audience, leaving a decades-long ban against encores at La Scala lying shattered at his feet. Juan Diego Florez has an effortlessly soaring, stunning, light tenor voice. And that, ladies and gentlemen, is something. (at least to opera fans)

Here’s what the buzz is all about.

But really, it is soprano Natalie Dessay who rules the roost of this cock-a-doodle comedy. Her singing is clarion, her acting inspired. Here is Natalie Dessay, performing “Chacun le sait, chacun le dit” (Everyone knows it, everyone says it) from Act 1 of “La Fille du Régiment”

All of the scheduled Met performances of “La Fille du Régiment” are sold out. The Met Live HD broadcast is this Saturday, April 26, at 1:30 eastern. This opera is a romp that the whole family can enjoy. Check here to find a participating movie theater near you.