In Sunday’s New York Times Magazine, law professor Noah Feldman stands up for imposing Islamic law in Britain. And elsewhere, too. No, really.

Feldman’s very first paragraph is a whitewash of those silly notions of the Archbishop of Canterbury from last week, that maybe a little sharia wouldn’t be so bad for the UK. Read his intro:

Last month, Rowan Williams, the archbishop of Canterbury, gave a nuanced, scholarly lecture in London about whether the British legal system should allow non-Christian courts to decide certain matters of family law. Britain has no constitutional separation of church and state. The archbishop noted that “the law of the Church of England is the law of the land” there; indeed, ecclesiastical courts that once handled marriage and divorce are still integrated into the British legal system, deciding matters of church property and doctrine. His tentative suggestion was that, subject to the agreement of all parties and the strict requirement of protecting equal rights for women, it might be a good idea to consider allowing Islamic and Orthodox Jewish courts to handle marriage and divorce. 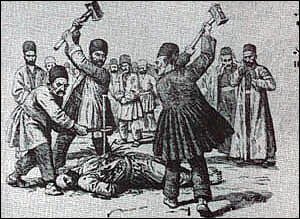 Sounds pretty innocuous, right? It takes a “journalist” of rare talent to make the Archbishop’s statement sound innocuous. Because let me tell you: there is nothing innocuous about replacing 500 years of English tradition with imported foreign notions of justice — and thereby forever destroying any chance of Muslim assimilation, and creating two sets of laws in one country.

From there, things get worse. And by “things,” Feldman means “all of us.” Again, I’m not kidding. Read on:

In some sense, the outrage about according a degree of official status to Shariah in a Western country should come as no surprise. No legal system has ever had worse press. To many, the word “Shariah” conjures horrors of hands cut off, adulterers stoned and women oppressed. By contrast, who today remembers that the much-loved English common law called for execution as punishment for hundreds of crimes, including theft of any object worth five shillings or more? How many know that until the 18th century, the laws of most European countries authorized torture as an official component of the criminal-justice system? As for sexism, the common law long denied married women any property rights or indeed legal personality apart from their husbands. When the British applied their law to Muslims in place of Shariah, as they did in some colonies, the result was to strip married women of the property that Islamic law had always granted them — hardly progress toward equality of the sexes.

Yes, bad press is to blame for sharia’s bad press — not the fact that today, right now, gays and adulterers are being executed for sexcrimes. It does indeed take a long memory to recall the days when English common law was so brutal, because no living person’s memory goes back that far. No living person’s grand-grandparent’s memory goes back that far. Where sharia is practiced today, right now, brutality is the norm.

Sure, sharia gives women some rights to hold property. But when a women’s home and marriage are subject to the whim of her husband, when she cannot leave the house without a male family member, when she cannot drive a car, when her clitoris has been crudely and violently removed… that woman might have some notional right to property, but she has no right to dispose of it. Really, she has no right to her own body or her own life.

But Feldman, not knowing when to quit, keeps digging:

In fact, for most of its history, Islamic law offered the most liberal and humane legal principles available anywhere in the world. Today, when we invoke the harsh punishments prescribed by Shariah for a handful of offenses, we rarely acknowledge the high standards of proof necessary for their implementation.

I’m sure that, while the hangman’s noose is going over his head in Tehran, each convicted homosexual welcomes his impending murder, knowing that he was convicted of queerness by “high standards of proof.” Or should that read “high standards of poof?” In the West, when somebody kills somebody else for being gay, we throw them in jail. Where sharia is the law, gay-killers are called “your honor.”

The West, obviously, hasn’t always been kind or just to gays, women, Jews, or other minorities. But ancient English common law is tempered by the modern will of the people, as expressed through Congress or Parliament. As we, the people, have liberalized, so have our laws. Sharia is based on the immutable Word of God. As such, the clerics — the most brutal and hating and threatening of the clerics — get the final say.

But to a Harvard law professor, none of that counts. Just in case you don’t already get Feldman’s moral equivalency game, he makes it explicit with this single line:

It sometimes seems as if we need Shariah as Westerners have long needed Islam: as a canvas on which to project our ideas of the horrible, and as a foil to make us look good.

You know what makes the West look good? Mirrors. You know what makes most modern Islamic nations look bad? Their own actions under their own laws. The West doesn’t need — or at least shouldn’t need — some dastardly foil in order to feel good about ourselves. Just look around. Meanwhile, most of the Islamic world in general — and almost every square inch of the Arab world in particular — has little to offer but brutality, hate, sand and oil.

Today, 66 percent of Egyptians, 60 percent of Pakistanis and 54 percent of Jordanians say that Shariah should be the only source of legislation in their countries. Islamist political parties, like those associated with the transnational Muslim Brotherhood, make the adoption of Shariah the most prominent plank in their political platforms. And the message resonates.

If everybody was throwing loose women off a bridge, would you throw one off, too? The other question Feldman doesn’t ask is: How many of those countries have ever had a real election? Or having had one real election, did they ever hold a second one? And what Feldman doesn’t tell you is: Sharia is popular, by his own data, in countries where it hasn’t been imposed. I wonder what the women of Saudi Arabia, or northern Nigeria, would say? If, that is, you could find women brave and self-immolating enough to offer an honest answer to a Western pollster.

Sharia governments, much less sharia husbands, are not known as being very welcoming of the free press, or very forgiving of uppity women. And Jews? Well, I hope Feldman likes paying taxes. Because, as a Jew, under sharia he’d be paying a surcharge just for the privilege of going to temple. I’m assuming, of course, that Feldman is a practicing Jew. If he’s given up his faith, he can forget being a second-class citizen and say hello to being stoned to death.

And as a writer? What are the odds that even Feldman’s pro-sharia book will ever be published in Arabic?

And as a journalist? Has there ever been a free press in a sharia jurisdiction? Is such a notion even conceivable?

There’s more. Lots more. You can click over to read it all, but I don’t suggest that you bother. What you’ll find there is just more of the same.

What’s worse is, Feldman teaches law at one of America’s premier universities. What’s almost unbelievable is, Feldman goes on for five more pages with similar anti-Western propaganda. What’s all-too-believable is, The New York Times is pleased as punch to surrender themselves to their would-be destroyers.