It Can Happen Over There 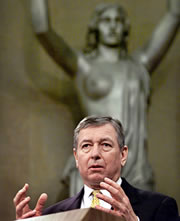 Has Europe gone to the right of John Ashcroft?

No, not yet. But one group is veiling nude statues across the Continent to protest increasing wearing of burqas, tolerance of sharia laws and “creeping Islamisation.” Read:

Throughout the night on 6th of March we have successfully continued our statue veiling campaign. With this reappearing action, we want to inspire the public to discussion concerning Islamisation and associated taboo subjects. By veiling statues in Berlin, Braunschweig, Dortmund, Düsseldorf, Helsinki, Moscow, Tampere, and Turku, we have expanded our activities to Germany, Finland and Russia within six months.

It sounds like an interesting project, and one I almost-sort-of participated in. We used to have neighbors with these ugly fake deer in their front yard. Always wanted to throw a tarp over those things.