In the Bag, Lady

So the Republican nomination belongs to McCain, while Huckabee and Paul soldier on. Huckabee hopes, I think, to win enough delegates to force himself into the Veep slot. Or failing that, to win a bunch of planks on the party platform. Or at the very least, to set himself up for another run at the nomination in 2012.

Paul won’t stop due either to principles or ego or both. Since his principles are, shall we say, malleable in the same way an anvil isn’t, I’m thinking it’s ego. Or to give the man the credit he probably deserves, he’s could just be as loony as a Looney Toon character wearing a straightjacket in a padded cell at Arkham Asylum with Hannibal Lecter whispering sweet nothings from the room next door.

The excitement then is on the Democratic side, where Obama and Clinton look to go all the way to the Denver convention before anyone is declared the nominee. Or is it? Obama is “on pace” to raise 30 million dollars this month. Clinton has raised four million so far, and loaned herself five more. The last candidate to loan himself money like that was Mitt Romney — and look where that got him.

Clinton should have wrapped this thing up by now. She’s got it all: name recognition, money, eight years of experience in the White House where she secretly led the Free World or did the dishes or something, money, and a cackle so grating it would make the Wicked Witch of the East voluntarily throw herself under Dorothy’s house, and also money. 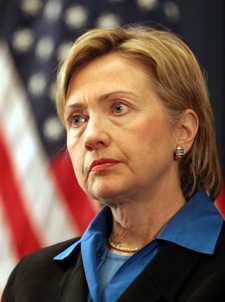 So what went wrong? Well, she’s running short on money and momentum and long on Bill Clinton.

Look. Any nominee-wannabe can survive a loss in Iowa. Given Iowa’s track record of picking losers, winning there might not be all it’s cracked up to be. But it’s clear that after Obama’s Iowa win, Camp Clinton panicked. And that set Clinton up for a fall in South Carolina.

Nobody expected Clinton to win in South Carolina. Or at least, no one would have given her much grief for losing there. For starters, half of SC’s Democratic electorate is black, and could be expected to vote heavily in favor of the first serious black candidate. Secondly, if Clinton wins the nomination, she’s not going to win a single southern state. Not one. Not even if she hauled Robert E Lee out of his grave and propped up his rotten skeleton as her running mate. In short, South Carolina was eminently and understandably losable for Hillary.

The Clintons – and now we must speak of them both together – tried to turn South Carolina, and the entire primary, into a race about race. (Neverminding that Hillary has been running on her gender since Day One.*) But it didn’t work. By making South Carolina so important, the Clintons set themselves up for a loss there, a loss big enough to give Obama the Big Mo going into Super Tuesday.

If you haven’t seen the numbers, Super Tuesday was a virtual tie in the popular vote, and awarded Obama a slight edge in delegates. George Will opined that had it not been for pre-cast absentee ballots, Obama’s momentum would have given him an even bigger edge on Tuesday.

What happened? Why did the Clintons err so badly? One word: Hubris. The Clintons didn’t just need to win, they needed to smash their opponent into the ground, everywhere, even in places where it didn’t matter.

Losing Iowa didn’t matter, but it got Hillary to cry the night before New Hampshire. South Carolina wouldn’t have made much more difference than Iowa, but Team Clinton put everything on the line there. After New Hampshire, Obama’s Iowa win looked like a fluke. But the Clintons gave him new life in South Carolina, and all because B&H Clinton can’t accept an acceptable loss.

The result: Super Tuesday turned into a dud. And when you’re running a campaign based on an assumptive brand of hubris, a dud is as good as a loss. When there’s nothing you won’t do to win, there’s nothing you can afford to lose. That was the Clinton’s strategy, and now they’re paying for it.

And they’ll pay and pay, all the way to the Denver convention next summer. And if Hillary and Bill manage somehow to snatch victory from the jaws of self-imposed defeat? Then they may find that the real bill comes due in November.

*FUN FACT: Bill Clinton used to run on his gender, too. Sometimes he’d even trip over it.