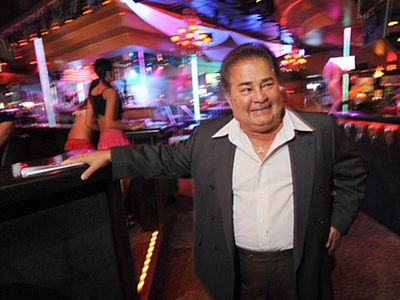 As reported in Sunday’s Miami Herald, President Obama made a very important phone call recently to Joe Rodriguez, a successful South Florida business owner who stimulates the economy by creating  jobs for attractive young women who then use their assets to generate income.

Rodriguez received the President’s call while working at one of his three Cheetah Gentlemen’s Clubs.  These clubs, as reported in the Miami Herald, offer “the hottest dancers, full nudity, full friction and a full liquor bar.

President Obama’s call was of historic significance as explained by the Herald’s news headline:

Rodriguez’s uncle, U.S. Army Pvt. Miguel Vera, is among 24 men who served in conflicts spanning World War II to Vietnam. Their heroism was overlooked, and they are now being retroactively awarded America’s highest award for valor.

On Tuesday, March 18, at a White House ceremony President Obama will present the Medal of Honor to Rodriguez on behalf of his uncle, who Rodriguez says, “was my hero always.” Vera died from his wounds in 1952 during a bloody battle in Korea.  Previously, he was awarded the Distinguished Service Cross and is now posthumously receiving an upgrade.

The reason for Pvt. Vera belatedly receiving the Medal of Honor along with 23 others is an attempt to recognize that possible prejudice occurred at the time, as the Herald reports:

Most of those two dozen recipients are Hispanic, and only three are alive. Tuesday’s ceremony is the culmination of a decade-long review of the military files of hundreds of Jewish and Hispanic veterans mandated by Congress “to ensure those deserving the Medal of Honor were not denied because of prejudice,” according to a White House statement.

Rodriguez recognized the potential public relations problem his three strip clubs might cause the White House and was honest with the Army liaison who made the initial call informing him about Tuesday’s ceremony.  “You do know what I do for a living?” he said he told her. “I have strip clubs.”

The Herald reports that the Army said “It has nothing to do with the award.”

Although not the typical CEO who usually frequents the White House, Joe Rodriguez, age 73 is himself a rags-to-riches story. As a boy he loved his uncle and from his club worked on the research that will culminate in the White House Medal of Honor ceremony.

Rodriguez is also a proud former Marine who served at Guantanamo Bay during the Cuban Missile Crisis. As a show of pride, annually on November 10, Rodriguez honors the founding of the Marines by hosting a celebration at his three Cheetah clubs and the girls stop dancing for 30 minutes.

In addition to his military service and patriotism, Rodriguez is also a philanthropist who says he has donated over $1 million to various charities such as hospitals, schools, breast cancer research and the Marines, annual Toys for Tots project. (Although a quick Google search revealed that sometimes schools are not supportive of Rodriguez’s line of business and debate whether to return his donations. Then, there is old news about the clubs that should make the White House a tad bit uncomfortable having Rodriguez as a guest.)

So watch on Tuesday, March 18 for there may be some news headlines that include the phrases “strip club owner,” White House and President Obama, but it is really about honoring the Korean War bravery of Pvt. Miguel Vera and his nephew’s determination to see that his uncle is finally given the recognition he deserved.

Hopefully, at the White House ceremony the President will not ask Mr. Rodriguez if his young, healthy, female employees are properly covered. (With Obamacare, that is.)