Will The Iranian Regime Kill a Green Leader Today?

So far, the regime has not been willing to physically eliminate Mir Hossein Mousavi or Mehdi Karroubi, and Supreme Leader Ali Khamenei has publicly warned that a move against the two would be like throwing a torch into a warehouse full of explosives.

On the other hand, last week’s two rounds of demonstrations removed any doubt of the resolve of the Green Movement, and both Mousavi and Karroubi have been taunting the regime, daring the mullahs to arrest them, put them on public trial, or execute them.

Now the two have been sealed off from the outside world, and the following report–which confirms what Banafsheh has been saying earlier–on Karroubi’s house arrest is pretty grim.  The regime likes to test the international waters with such operations, and the tyrants must be greatly cheered by the silence from the White House and Foggy Bottom and, so far as I know, other Western capitals.

All these failed “leaders” have become accomplices to evil.  Even a simple statement “Let Mousavi and Karroubi go free.  Now.”  would help. 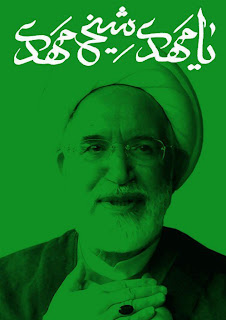 February 23rd, 2011 – Following the raid of Mehdi Karroubi’s residence by security forces two days ago in which Mehdi Karroubi and his wife Fatemeh were locked in different rooms while their house was searched and books and documents were confiscated, the latest reports point to the fact that security agents are now deployed inside the building and have cleared the street.  According to Saham News, as of this morning, intelligence agents have now transferred their vehicles and equipment inside the property and completely occupied the building.  It is also being reported that as of ten days ago all necessities for Karroubi and his wife are being provided by security forces, a development that is concerning given similar cases in the past in which physical elimination [of the individual] has been the objective.

In light of the fact that Karroubi and his wife were in perfect health prior to their house arrest, in a letter addressed to the authorities, Karroubi’s family stated that they will hold government officials responsible for any incident occurring as a result of food and other items being provided to Karroubi and his wife by intelligence officers.

Given that Mehdi Karroubi’s children have not been allowed to provide any necessities to their parents in the past two weeks and even the fruit delivered by one of their children was rejected by security forces, Karroubi’s children have explicitly warned government officials, security forces and intelligence agents against carrying out any plans designed to physically eliminate Mehdi Karroubi and his wife Fatemeh Karroubi, declaring that the consequences of such actions will only further damage this regime.