Cross-posted from Asia Times. I am reposting this essay, which is behind the Asia Times paywall, in consideration of the seriousness of the situation. This is not a drill.

No Russian cyberspooks, no Chinese spies, no jihadi terrorists – no external enemies of any kind could have brought as much harm to the United States as its own self-inflicted wounds. I spent last evening taking calls from friends around the world, including a senior diplomat of an American ally who asked me what I thought of the first evacuation of Capitol Hill since the British invaded in 1812. “I’m horrified,” I said. “So is the entire free world,” the diplomat replied.

There are belly-laughs in Beijing this morning. The Chinese government daily Global Times taunted:

The riots taking place in Washington DC, the storming of the US Capitol by hundreds of President Donald Trump’s supporters which ended with four dead, 52 arrested and 14 police officers injured on Thursday shocked the world, and Chinese experts said this unprecedented incident will mark the fall of “the beacon of democracy,” and the beautiful rhetoric of “City upon a Hill” will perish.

The world is watching as US allies feel disappointed when they saw the country that they used to admire descend into a huge mess. Chinese observers said this is a “Waterloo to US international image,” and the US has totally lost legitimacy and qualification to interfere in other countries’ domestic affairs with the excuse of “democracy” in the future.

If it were only a matter of Trump’s misbehavior, this disaster would be survivable. The trouble is that the popular belief in a vast and nefarious conspiracy has a foundation in fact: Starting before Trump’s term in office his political opponents abused the surveillance powers of the intelligence community to concoct a black legend of Russian collusion on the part of his campaign. The mainstream media, staffed overwhelmingly by Trump’s enemies, slavishly repeated this black legend until large parts of the population refused to believe anything it read in the newspapers or saw on television.

The leadership of the Democratic Party, its allied media, and the Bush-Romney wing of the Republican Party decided to play dirty to expunge an obstreperous, incalculable outsider from the political system. And in doing so, this combination, America’s establishment, destroyed public trust in the Congress and the media. It’s no surprise that two out of five Americans now believe that a vast conspiracy rigged the 2020 presidential elections.

The spectacle of a serving president inciting a mob against the U.S. Congress to stop the certification of his successor held the world in morbid fascination. But the biggest problem isn’t Trump’s misbehavior, egregious as it is, but the eruption of popular rancor against the constitutional system that has made America a model of governance for the world. Leftist mobs last spring burned police stations and destroyed shopping districts in a rampage against supposed systemic racism, and Trump supporters desecrated the Holy of Holies of American democracy, the chamber of the United States Senate.

Behind the minority of violent actors is a majority that believes the system is rigged against them – whoever “them” might be. The Democrats say that the system is rigged against African-Americans, women, and other minorities, and the Republicans say that a global elite has rigged the system against middle-income Americans. “Rigged elections” has the same resonance as “systemic racism.” These by-words imply that disagreement is prima facie proof of villainy: To deny that there is systemic racism is to be a racist, and to deny that elections are rigged is evidence of complicity in a vast plot.

A quarter of Americans believe that COVID-19 was a planned conspiracy of one kind or another, according to the Pew Survey; just under half of Americans with a high school education or less believe this. One out of three believes that a “deep state” is trying to undermine Trump. I reject the first and believe the second: my colleagues at Asia Times and I have regular access to virologists in a number of countries with scientific credentials and no political agenda to pursue, and can sift scientific evidence and opinion. By contrast, I know personally enough of the actors in the so-called “deep state” to conclude that they are acting in concert to wreck the Trump Administration. I also know many of the writers who have exposed the “deep state,” including Andrew McCarthy and Lee Smith, to trust their bona fides. I denounced this conspiracy repeatedly in these pages, most recently in an essay entitled “The Treason of the Spooks” (Dec. 4, 2020). For details, see Andrew McCarthy’s 2019 book Ball of Collusion, which I reviewed in Asia Times, or Lee Smith’s The Plot against the President.

Sometimes there is a conspiracy and sometimes there isn’t. But Trump’s political supporters, bombarded daily by fake news about Russian collusion and other alleged misbehavior, have come to distrust any criticism of their president. If Trump was right that the whole impeachment business was an extra-legal conspiracy on the part of his enemies, why shouldn’t they believe that the election was rigged?

VIP: Could Biden Have Truly Won the 2020 Election?

This is a lose-lose proposition. Assume that Trump is right, and the election was rigged. In that case the United States has become a banana republic and American democracy a twisted joke. Assume that he is wrong, and that nonetheless – as Sen. Ted Cruz (R-Texas) intoned to justify his refusal to accept the election outcome – 39% of Americans nonetheless believe that election was rigged, because their president told them it was rigged. In that case the public trust that makes democracy possible has collapsed. The people, as Bertolt Brecht observed after demonstrations against the Soviet puppet government in East Germany, have lost the confidence of the government, and the simplest course of action would be for the people to dissolve the government and elect a new one.

For most of the world, representative democracy makes no sense: How can you entrust decisions of vital importance to yourself and your family to a representative you have never met, who is unrelated to you by blood ties, who owes you no clan allegiance, and sits in a faraway capital with hundreds of other such representatives? How can you accept the votes of a legislature composed of strangers? Trust in pre-modern society extends no further than blood ties. It was madness for the United States to believe that it could export democracy to parts of the Middle East. Public trust, a quasi-religious belief in the sanctity of the democratic process, is the precondition for democracy.

There is extensive evidence of vote fraud, but (in my view) not sufficient evidence to justify preventing an orderly transition of power. I have difficulty believing that the Democrats invented votes for Biden and destroyed votes for Trump while at the same time Republican candidates for the House of Representatives showed a surprising gain. In the U.S. presidential system, voters choose the executive and the legislature separately, and they do so on the same ballot. Why would the Democrats, whose local political organizations depend more on the Congress than on the presidency, fake votes for one and not the other?

Aha, say the conspiracy theorists: the mainstream Republican Party doesn’t like Trump any more than the Democrats, so it conspired with the Democrats to elect legislators while cheating the president. That is possible, but improbable in the extreme: It would require a conspiracy involving thousands of people sworn to secrecy. No such conspiracy is possible. The trouble is that the American public can’t be asked to apply a high degree of discernment to the probability of different sorts of conspiracies. A handful of FBI and CIA agents could create a false narrative about Russian collusion with the help of the infamous Steele Dossier, and the credulous media broadcast it out of rancor against Trump. Stealing an election through interference in tens of thousands of polling stations would require a conspiracy on an industrial scale.

The problem isn’t Trump, or Joe Biden, or Kamala Harris, or any other politician: It is the popular response to the gut-wrenching realization that America is hollowed out, that it is living on borrowed money (which is to say borrowed time), that it lacks both the material and organizational resources to protect its population during an emergency. Hospitals in Los Angeles have told emergency workers not to administer oxygen to patients who are not gravely ill, because the city is running out of oxygen under a deluge of COVID-19 patients. Earlier the United States clothed health care workers in garbage bags because it couldn’t manufacture protective gear; now it can’t produce sufficient oxygen.

For all the talk of making America great again, the deterioration of U.S. industry continued under the Trump Administration (see The Wizard of Wuz, Dec. 7). It isn’t simply that the U.S. produces no telecom equipment at all, let alone a world-class product that can compete with China; it can’t produce essential medical supplies in urgent demand in a public health crisis. On the day that the Washington mob chased the congressmen, senators, and Vice President Pence out of the Capitol, more than 4,000 Americans died of COVID-19, a new record. American scientists developed what may be the most effective COVID vaccine, but the U.S. managed to administer just 800,000 doses yesterday, which means that it will take another year to immunize the population.

Americans are frightened for their future, with good reason. They see enormous rewards accrue to a handful of tech companies, and stagnation and decay in large parts of the rest of the country. Donald Trump gave them a frisson of hope, and the Establishment reaction against Trump confirms the popular suspicion that a malevolent global elite has seized control of their country. Trump shamefully exploited this suspicion to direct a popular storm against the Congress.

The U.S. is living off borrowing from the rest of the world. Its net international investment position fell by about $12 trillion during the past 10 years. And the federal deficit is now 15% of gross domestic product, the highest since World War II. What can’t go on forever, won’t (in the late Herb Stein’s famous formulation). 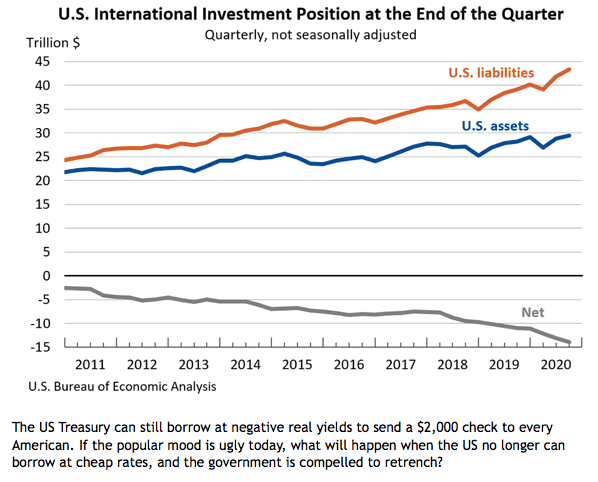 The U.S. Treasury can still borrow at negative real yields to send a $2,000 check to every American. If the popular mood is ugly today, what will happen when the U.S. can no longer borrow at cheap rates, and the government is compelled to retrench?

6 Other Times People Broke Into the U.S. Capitol

The All-Out Assault on Conservative Thought Has Just Begun

For media inquiries, please contact [email protected] David P. Goldman is the columnist “Spengler” for Asia Times Online; his latest book is How Civilizations Die: (And Why Islam Is Dying Too). He is the Wax Family Fellow at the Middle East Forum.
Read more by David P. Goldman
Tags: DONALD TRUMP JOE BIDEN CAPITOL