TikTok, Schmiktok, or: Shooting Spitballs at the Dragon

Corporate America united this morning to warn the White House that a ban on China’s everything app Wechat would cost hundred of billions of dollars in American companies’ sales, the Wall Street Journal reports. We wrote about this in Asia Times two days before the Journal. Apple sells 30% of its iPhones in China, and the Chinese do everything on WeChat, including electronic payments as well as social media and messaging.

The bigger news is that China’s exports to the U.S. as of July reached $44 billion for the month, or an annual rate of $525 billion, a hair’s breadth below the September 2018 record, before the Trump administration slapped tariffs on Chinese goods. Americans are buying more computers and other gear under the lockdown (remember how hard it was to buy a computer in April?), and China is the only place that makes enough of them. 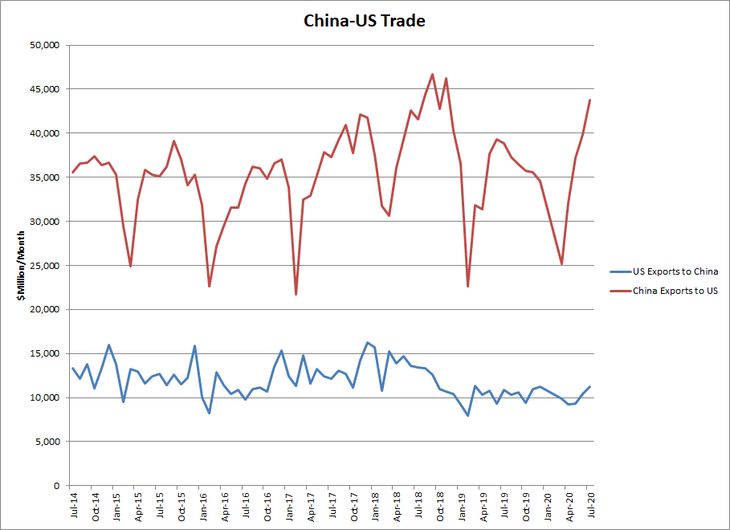 Who cares about TikTok? There are plenty of reasons to crack down on the abuse of personal data by TikTok’s parent, ByteDance. But the Trump administration’s sell-it-or-shut-it order is the equivalent of a spitball directed at a dragon.

We’re becoming more, not less, dependent on Chinese manufacturing. Intel, the last big U.S. chip fabricator, has just announced it might exit the manufacturing business altogether, and rely instead on Taiwan. We only make 12% of the world’s computer chips today (and none of the most advanced ones). That’s an economic as well as a national security disaster. As I report in my book You Will Be Assimilated: China’s Plan to Sino-Form the World, malefactors can slip an undetectable “back door” among the 10 billion transistors in a modern computer chip. Taiwan may be friendly, but it isn’t secure. China is hiring hundreds of the country’s chip engineers.

Apple Inc., Ford Motor Co., Walmart Inc. and Walt Disney Co. were among those participating in the call, according to people familiar with the situation.

“For those who don’t live in China, they don’t understand how vast the implications are if American companies aren’t allowed to use it,” said Craig Allen, president of the U.S.-China Business Council. “They are going to be held at a severe disadvantage to every competitor,” he added.

In fact, U.S. corporations want to expand in China, not leave it. The Journal added:

According to a survey released Tuesday by the U.S.-China Business Council, 86% of more than 100 member companies report that the bilateral tensions have caused lost sales or otherwise impacted their businesses in China. “We have been cut out of some bids because we are a U.S. company,” the report quotes one company as saying.

At the same time, according to the survey, conducted in May and June, 83% of the council’s members counted China as either the top or among the top five priorities for their global strategy.

Nearly 70% of respondents expressed optimism about the five-year business outlook in China, and 87% said they have no plans to shift production out of the country.

According to the Bloomberg average of economic forecasters, China’s economy is expected to grow 6% this year, and the U.S. economy is expected to shrink 6%. Cutting payroll taxes and capital gains taxes, as the Trump administration proposes, is a good thing to do. I argued for a payroll tax cut before tax cuts were cool, back in February. But if we want to stay ahead of China, we need a crash investment program on the scale of the JFK Moonshot or the Reagan Strategic Defense Initiative. It will cost a trillion dollars over ten years, and demand some radical reforms of student subsidies, mathematics education, and a lot of other things we neglect.

People seem to think that the Chinese are the Romulans. They aren’t. China is the Borg. They don’t conquer; they assimilate. They are assimilating increasing portions of the world economy, including a great deal of corporate America. The National People’s Congress last May announced a $2.2 trillion, five-year investment program to establish Chinese technological supremacy in several key fields. We won’t stay ahead of them by taking potshots at video apps.