The Coming Economic Disaster, and the Last Chance to Avert It

A few years ago, the American Establishment dismissed China’s economic challenge. A sclerotic, dictatorial system couldn’t innovate, only copy, the jingle went, so we really didn’t have to worry about them. Gordon Chang, the neocons’ favorite China expert, released a new edition of his book The Coming Collapse of China every couple of years.

Now, the attitude of the Establishment has shifted from contempt to panic, rather like the British facing a Japanese army advancing on Singapore in 1942. The Establishment is now defeatist. It is one thing to concede more power to China in the South China Sea, for example, and quite another to accept Chinese dominance in high-tech trade. That would be a disaster.

Unfortunately, we are now headed for such a disaster.

From my essay “A Path Out of the Trade and Savings Trap” in the current issue of Journal of American Affairs:

Except in Africa and South Asia, the world’s population is aging rapidly. Between 2010 and 2050 the proportion of Americans over 65 will nearly double assuming constant fertility and immigration. By 2034 the Social Security Trust Funds will be depleted. By that time there will be two Americans over 65 for every five Americans of working age; if the government taxes earnings on a pay-as-you-go model, the burden on working Americans will be insupportable. The average American family has saved only $96,000 for retirement; more pertinent, the median family has saved just $5,000.

There is another side to America’s inadequate savings rate, and that is a chronic current account deficit. Countries save by exporting more than they import and saving the balance. The economics literature documents the close relationship between rates of aging, savings, and current account balances. Older people lend to younger people to fund retirement, and younger people borrow from older people to start families and build enterprises. Countries with a higher proportion of aging people have a greater need for savings, and typically run a current account surplus with countries that have a younger population. … Without exports, we cannot save; with a chronic trade deficit, we cannot help but dissave at exactly the point when we require an increase in savings. Thus America is headed towards a catastrophe. Can it be averted?

Yes, it can, but time is getting short.

The good news is that the prospects are good for a quantum jump in productivity in the developing world. The bad news is that China is acting aggressively to position itself as the dominant equipment supplier, investor, joint venture partner and technology provider in this revolution. By contrast, the United States is drifting towards the export profile of Brazil, with strength in agricultural commodities and energy but overall weakness in high-technology manufacturing and exports.

America’s problems are so grave that trade protection will do little to solve them. American innovations gave us the high-tech manufacturing industries that China now dominates, and the ultimate solution is to create new industries that make the existing investment opportunity set obsolete. Some ambitious steps are a prerequisite for overtaking China.

First, the government cannot sit on the sidelines while China massively subsidizes its own industries. I do not propose that we copy China’s policy of directly subsidizing industries we think desirable; this leads to enormous waste and inefficiency, as well as corruption. But the U.S. government should fund basic research into new physical processes and technologies under the aegis of the Defense Department and NASA, as it did when John F. Kennedy promised a moon landing and when Ronald Reagan promised to build a missile defense system. I elaborated such a policy in my essay “The Digital Age Produces Binary Outcomes,” in this journal (Vol. I, No. 1). 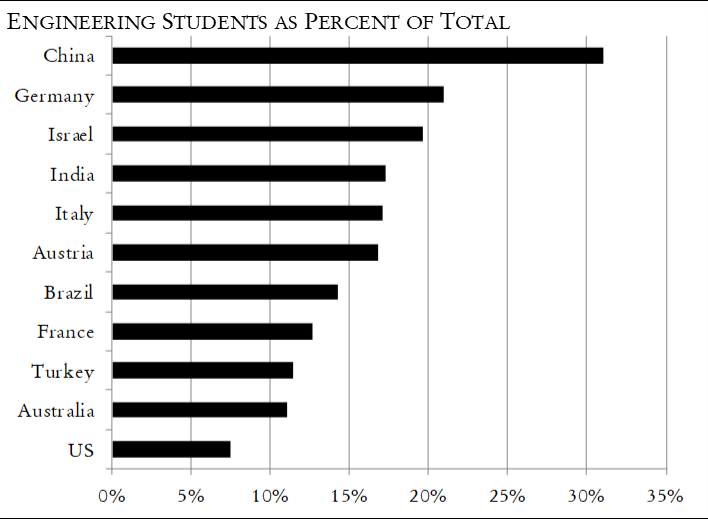 Second, the United States must refocus education subsidies on STEM training, as it did after the 1957 Sputnik launch. Only 8 percent of American undergraduates choose engineering as a major, compared to more than 30 percent in China (which now graduates four times as many engineers as the United States).

Third, the United States should use a range of measures to force parts of the high-tech supply chain back to the United States. A first step would be to require 100 percent American content for semiconductors, flat panels, sensors, and other key components of defense equipment. That will raise the cost of defense goods considerably, but it is a measure justifiable on national security grounds alone, and will repatriate key elements of high-tech production. Other measures  to prevent American innovations from migrating to production lines elsewhere will be required. It won’t quite be Ricardian comparative advantage, but that’s the way the cards lie.

Fourth, the United States should compete head to head with China for predominance in the communications and information revolution now underway in the developing world, especially with countries that look with dismay at the growth of Chinese power — for example, India, now the world’s most populous country. China’s One Belt, One Road program does not guarantee its success in high-tech trade. There are some sectors in which it may be in our interest to cooperate with China, but many others in which competing institutions, for example the Asian Development Bank, can offer effective competition to Chinese influence. The United States and Japan are natural partners for this kind of enterprise. With a rapidly aging population and net foreign assets of $3.12 trillion as of the end of 2016, Japan needs high-return investment opportunities.

The essay reflects analysis and recommendations I prepared for Steve Bannon when he was still chief strategist at the White House.

An autobiographical note: in 2013 I became a managing director at a Hong Kong investment banking boutique, Reorient Group (now Yunfeng Financial, whose main investor is Jack Ma of Alibaba). We took Chinese high-tech companies public that were founded by top U.S. university graduates. China has some brilliant innovators. Read the whole essay at Journal of American Affairs. And be very afraid.