“Business investment in the US has ground to a halt” is the lead story on MarketWatch this morning. The site reports, “For the first quarter since late 2009, shipments of U.S.-made capital investment goods declined, falling at a 4.9% annual rate, according to Census Bureau data released on Thursday.” 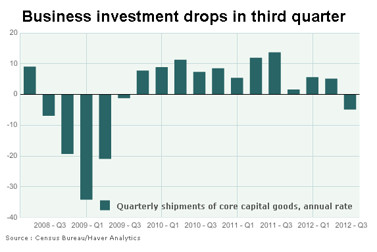 There’s an investors’ strike underway of proportions we have never seen before. Corporations are hoarding $2 trillion worth of cash. Private equity funds have $1 trillion of unused commitments. Pension funds and life insurance companies are gasping for returns. Yet Americans refuse to take risk on other Americans. Households, corporations, and institutional investors would rather keep money under the figurative mattress in ultra-safe investments than invest in future productivity.

There’s no textbook description for this condition, so we’ll give it a name: the Obonomy. The anti-business toxicity in Washington is so intense that that no-one will take risks.

The investors’ strike is especially onerous given that the average profit margin for the nearly 4,000 exchange-traded public companies for whom data are available was over 18% during the second quarter of 2012. Why wouldn’t investors put more money into businesses earning 18% year, rather than buy safe securities yielding the rate of inflation or less? The answer is that they are terrified of the anti-business environment. If Obama is re-elected, business will hit a wall of tax increases and face a regulatory reign of terror.

The great American profit machine has stalled. If Obama is re-elected, we are all going to be poorer.