The red-hued posters feature four vignettes. One depicts Joe Biden seated on a throne, arrayed between two portions of the Constitution with Dr. Anthony Fauci beneath Biden’s right hand, which holds a spike protein. Biden wears red sunglasses. The poster features the all-capitalized words “MANDATE! SEGREGATE! SUBJUGATE!” at the top, above the president’s head. 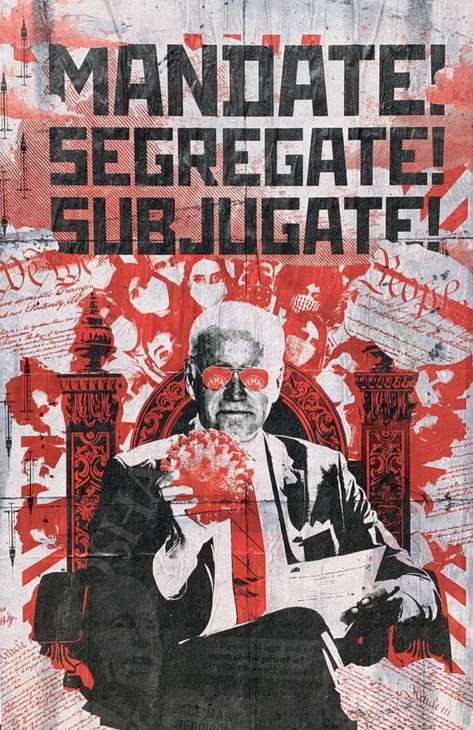 Another features COVID czar, Dr. Anthony Fauci, as a priest of “scientism.” He wears a collared cassock and holds a large syringe like a monstrance to bless the vaccinated and threaten the unvaxxed. 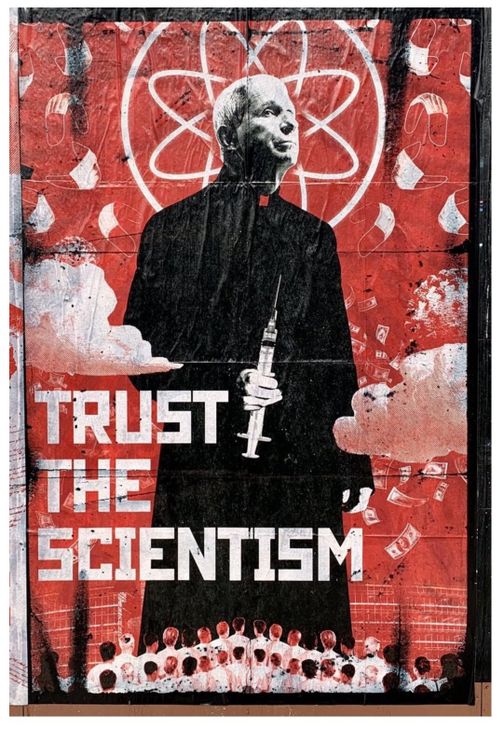 Another features President Biden with a chorus of masked children arrayed in front of him. A halo of syringes rests over his head. The words “good kids are compliant kids” are written above. 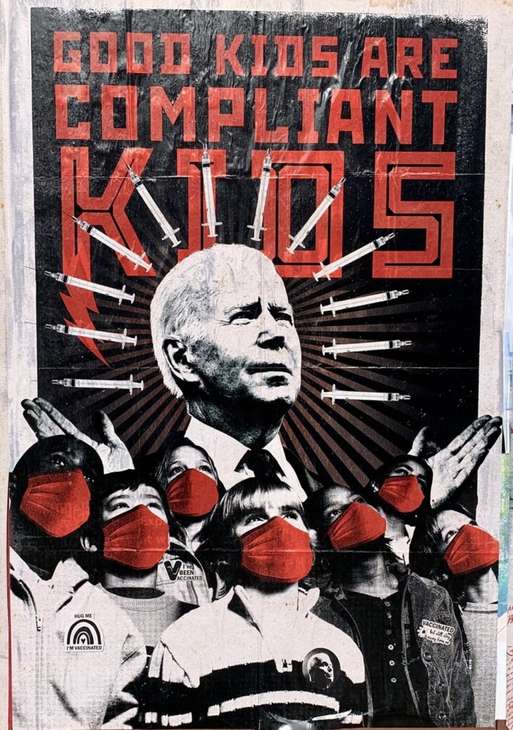 The fourth poster is black and red and features an angry-looking Biden holding a sledgehammer. The tool is imprinted with “OSHA,” the government agency the president hoped to use to force COVID shots on working Americans. The words “comply” frame the image. 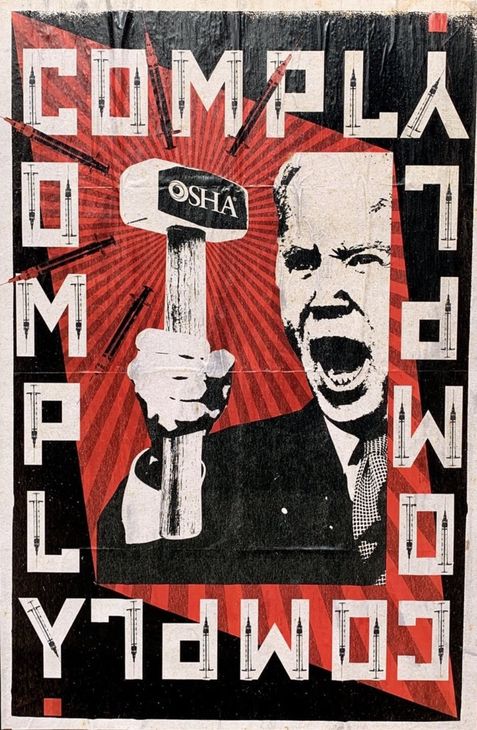 It’s unclear who the artist is. No one’s stepped forward to take credit or responsibility.

Related: Only One Argument Need Be Made Against the Biden-OSHA Mandates

On the west coast, street artist SABO recently tattooed his favorite streets in and around Hollywood with COVID posters and … whoa.

His familiar graphic depictions feature a masked face in turquoise and black with the word “comply.”

Another more controversial poster caused concern when it was put up near a Jewish synagogue in the Fairfax district. The point should have been self-evident, but local news crews didn’t quite understand the artist’s ironic take on marking people for humiliation and banishment. Does Godwin’s law apply to street art or something?

SABO told PJ Media he was “drawing a comparison between people becoming second-class citizens… by not having papers to show you’re vaccinated.” He couldn’t believe it when the art piece was considered authentically anti-Semitic. Heads are shaking everywhere.

SABO’s other COVID-related poster features a cranky-looking Alec Baldwin. The red and black poster combines Baldwin’s shooting of the cinematographer from his latest movie and the wounding of the director with COVID mandates. The poster says, “Take the shot.”

We guess you probably don’t need an explanation for that one, except you have to admire the throwback to phrenology, which was once considered legitimate “science.”

With the Biden Administration working with Big Tech to mute and censor messages, and the media’s fake fact checks, it’s harder than ever to get out a contrary message.

Doubt me? Look at this backpack-wearing white woman who was so fauxfended by the street art that she tore it down. She believes she has the moral authority to tear down someone else’s message.

ANNND some lady is already out here ripping down the “dangerous propaganda.” 🤣 pic.twitter.com/xrEYHl4poq

This seems right in line with what we’ve seen in public opinion polling.

A recent Rasmussen Poll showed the majority of Democrats believe unvaccinated Americans should be locked up in their homes, locked out of polite society, fined, and banished, as PJ Media’s Stacey Lennox reported recently. Nearly 50% of Democrats polled believe that Americans should be imprisoned for spreading “misinformation” (read: holding a differing opinion). A third of Democrats favor removing children from their parents if they fail to comply with COVID mandates.

Liberals used to favor speaking truth to power and questioning authority. But today’s Democrats aren’t liberals; they’re humorless, authoritarian Leftists. Street artists are simply putting up a mirror so they can get a look at themselves. If they want to censor the message, then they’re the problem.