I bring tidings from the Left Coast, Messed Coast, where we learn that California has lost its governor.

It’s not so much that Californians miss the governor—millions voting to recall him will attest to that—but they are curious why he’s so quiet on Twitter and not his usual camera-hog self these days.

Governor Hair Gel made news when he punched out of Joe Biden’s plane, headed for that sleep-inducing Glasgow climate confab, to deal with “unspecified family obligations.” That was October 29.

In fact, the last time the public saw him was when he received his COVID booster shot on October 27.

What happened to Gavin Newsom?
🤔🤔🤔 pic.twitter.com/eB05rgPWTw

The game is afoot.

Not big on conspiracy theories at all, but this year has been weird. This surely fits the definition of weird – Gov. Gavin Newsom's last public appearance was Oct. 27, when he received a coronavirus booster shot. https://t.co/mXYAZtwVRc

Newsom promised to attend the climate meeting virtually but was a no-show.

We hope that the governor is in good health. But, let’s face it: the guy who wants to force shots on kids so they can go to school (and their parents can go to work), and who closed beaches and instituted mask mandates—only to break all the rules for himself and his family—isn’t likely to ‘fess up to a VAERS-worthy complaint.

California has 11% of the nation's workers and produced 26% of its unemployment claims last week. This is the "new normal" Newsom promised from the start.

Next, let’s travel up the Messed Coast to Oregon. How much does Portland Mayor Ted Wheeler need cops now? 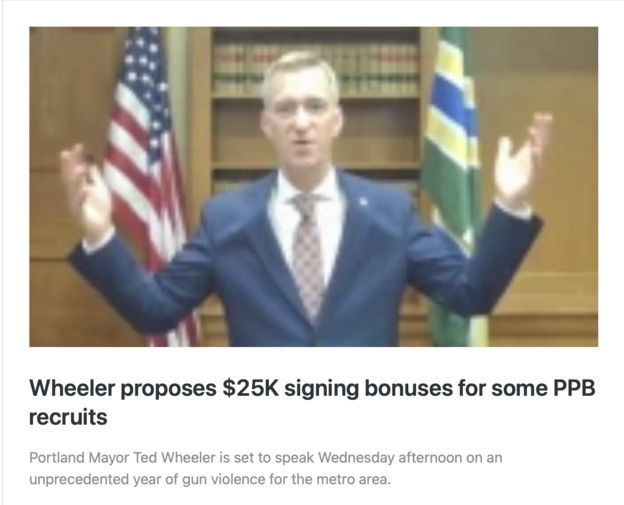 The mayor of Antifastan has fostered police targeting, injury, dangerous rules of engagement, and little riot control. The mayor-slash-police commissioner also dismantled the gang and gun squad, before he was forced to restart it because of all the violence. Wheeler was “disappointed” when he couldn’t force cops to get COVID shots. He just loves these guys!

And they’re leaving in droves.

KOIN 6 reports that, after a year that produced a record number of shootings (1,000 so far) and is on pace to do the same with homicides (currently standing at 72), Wheeler thinks the city may need some cops. He wants 300 more sworn officers and is willing to give them each a $25,000 signing bonus.

When normal people told Ted to let the cops do their jobs at the start of the Summer of Love riots, they were dismissed as white supremacists, bigots, and fascists.

(Glances at watch.) We’re waiting for our apology, Ted.

Meet this little tyke. His name is Dezmun and he had an absolutely wonderful Halloween costume that he, like all of his classmates, was allowed to wear on the Friday before Halloween.

Oooh, problem. About that costume …

Dezmun dressed in a suit and put on a red “Make America Great” cap. But that wasn’t all. Check out that button. 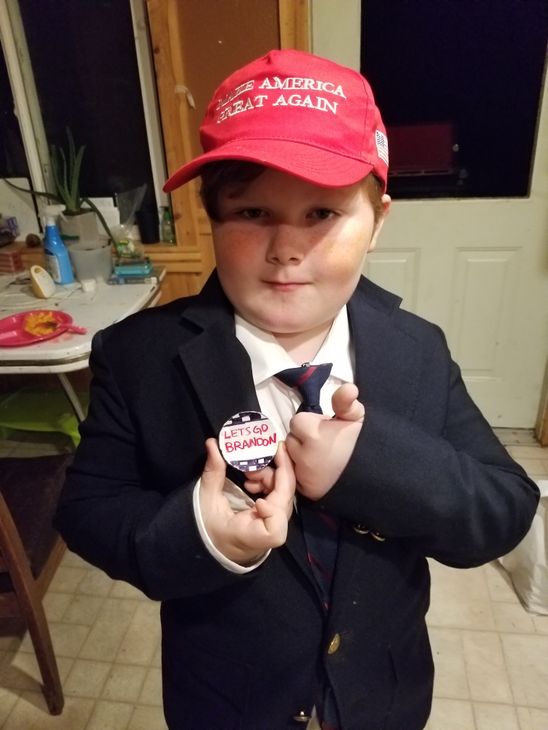 Dezmun’s mom told West Coast, Messed Coast that the elementary school in Estacada, an area which used to be where normal people lived, told her son to remove that triggering pin.

There’s been a hilarious effort by mainstream media to act befuddled over the derivation of “Let’s Go Brandon,” but the teacher was onto it and knew that it was inappropriate. At least, that’s what she told the kid when he asked.

“Why?” he asked her. She replied that “it would be inappropriate for her to tell him.”

Even a cafeteria lady got into it with Dezmun. Mom related to us, “He was also told by a staff member he was unfamiliar with, who was on cafeteria duty, that his costume was pretty hateful.”

According to mom, there had also been an incident a week prior to Halloween, when the students were only talking about costumes.

“[T]hey were talking as a class about some of the costumes that they were thinking about wearing. My son said well is it okay to be something political and she asked who he was thinking of and he said Donald Trump and she said as long as it’s not an issue [he could wear it].  [B]ut if it becomes an issue you’re going to have to change your Halloween costume.”

And finally this week, some good immigration news to report. My son-in-law, who is from Mexico and has been trying to become a U.S. citizen for more than five years, passed his exam and swore his oath. Congratulations!

Victoria Taft is an award-winning journalist, writer and terrestrial radio talk host, heard in Seattle and on the rest of the Left Coast. Listen to her twice weekly  “Adult in the Room Podcast.” Find her at VictoriaTaft.com  Parler, MeWe, Minds, Locals, Twitter & Facebook. Her book mocking antifa will be out this year. For media inquiries write: [email protected]
Read more by Victoria Taft
Tags: CALIFORNIA OREGON WASHINGTON WOKE VACCINE MANDATE