Timeline: Trump Was Still Speaking When the Capitol Riot Began, But the Left Blamed Him Anyway

This week’s impeachment of President Trump was done under the pretext that he urged people attending the Save America rally to riot at the Capitol Building. There’s no evidence that the president’s words urged riot or unrest, as I pointed out at PJ Media. In fact, there are things he said that mitigated against the claim that he urged people to crash the Capitol Building, scare people, and break things. But could President Trump have stopped it? Our timeline shows the president was still on stage and speaking when the clash at the Capitol started.

Indeed, it’s possible the siege could have been averted had the Capitol Police taken the advice of the FBI and NYPD monitoring the chatter of the QAnon conspiracy theorists planning the assault and responded with increased security. The lax security was observed by a shocked senior analyst at the Center for Security Policy.

Oddly, the Washington field office of the FBI did not consider the rally a security threat.

But the president is blamed for the outburst of violence. Is that blame justifiable?

Some suggest that questioning the election results and then holding the rally itself were bad ideas, but President Trump did not urge the crowd to violently overthrow the Capitol Building in his speech. He talked of a peaceful march. Considering there had been little or no violence caused by his supporters at rallies before (antifa has started plenty of scraps), and that he had not been briefed about QAnon online chatter, according to media reports, should the president have reasonably known there would be violence?

We might find some answers in the timeline. This timeline is based on reports and the Twitter timelines of people chronicling the events. All times are Eastern.

The Date for the Event Is Set

12/22: The date for the Save America rally is moved to 1/6 from the day after the inauguration. January 6th is the date the Electoral College votes are to be counted

WUSA reports the rally is permitted but a march by the Women for America group is not. It’s possible another group has a permit to conduct a march.

A peaceful pro-Trump rally is held:

Trump supporters gathering at Freedom Plaza in DC. President Trump is set to speak tomorrow at 9 am at Ellipse Park. Congress will meet Wednesday, Jan. 6 at 1 p.m. EST, to formally count the votes cast by the Electoral College pic.twitter.com/NbDllTFiry

The rally goes into the night in 39-degree weather.

It’s so loud the West Wing of the White House can hear:

7:05 AM: Organizers remind people not to bring backpacks, banners, flag poles. The group reminds rally-goers that doors open at 7 a.m. for a 9 a.m. start 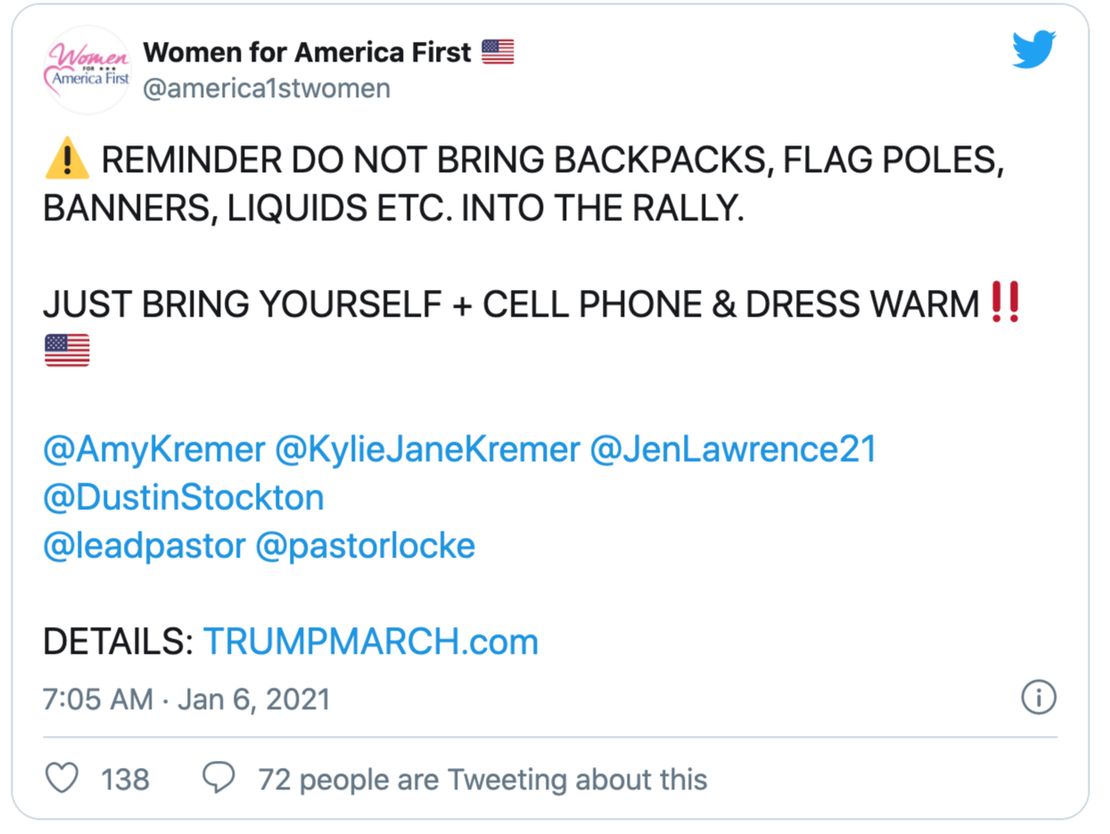 8:32 AM: Women for America First speaker welcomes the gathering audience

9:06 am: Speaker schedule commences with Congressman Mo Brooks, who encourages the gathering crowd to stop at the Capitol on the way home. There are few people in the audience to hear him.

9:47 AM: Right Side Broadcasting Network is livestreaming from The Ellipse, displaying the time 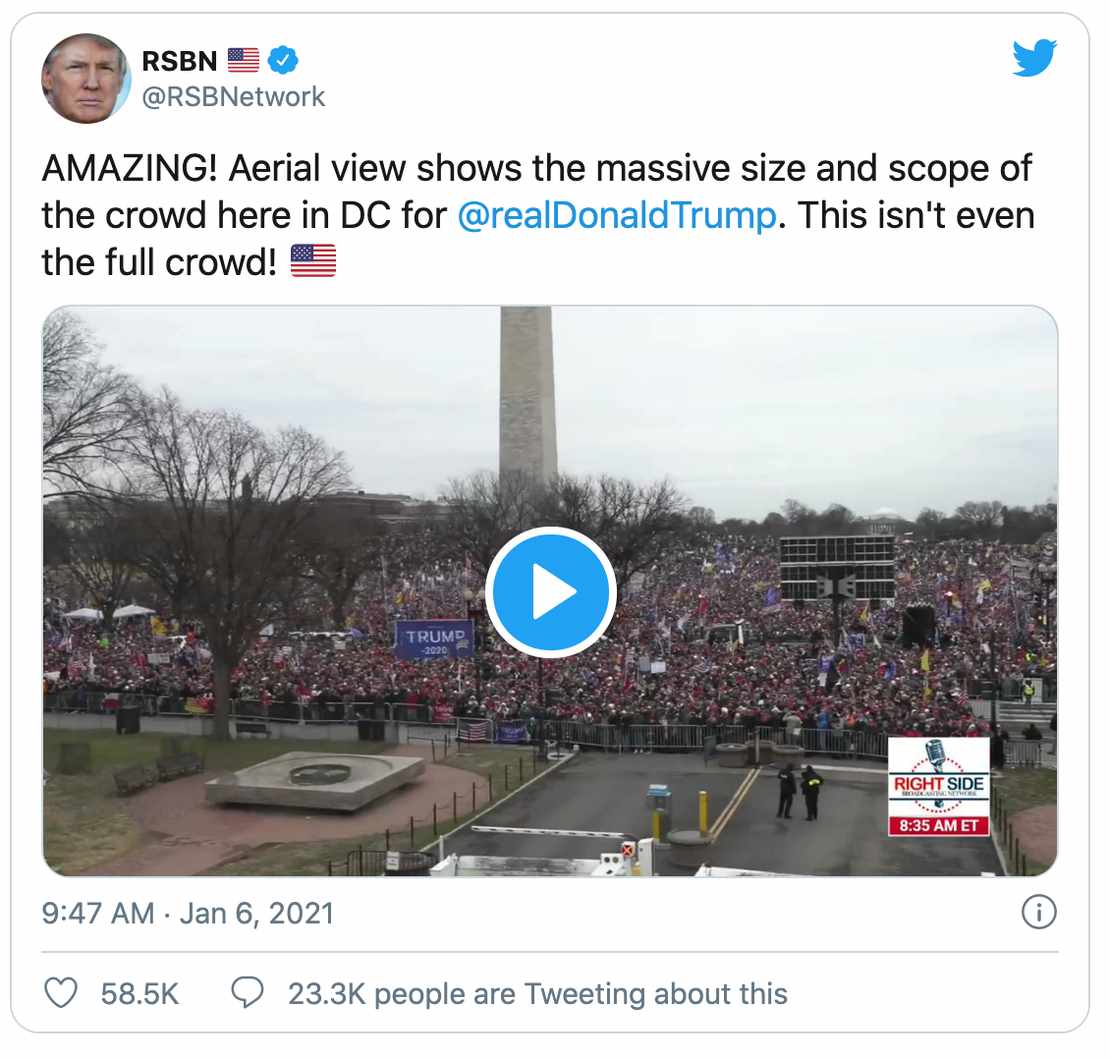 10:09 AM: Georgia State Rep Vernon Jones announces during his speech that he’s switching parties to the GOP. The crowd cheers and chants “USA! USA!” 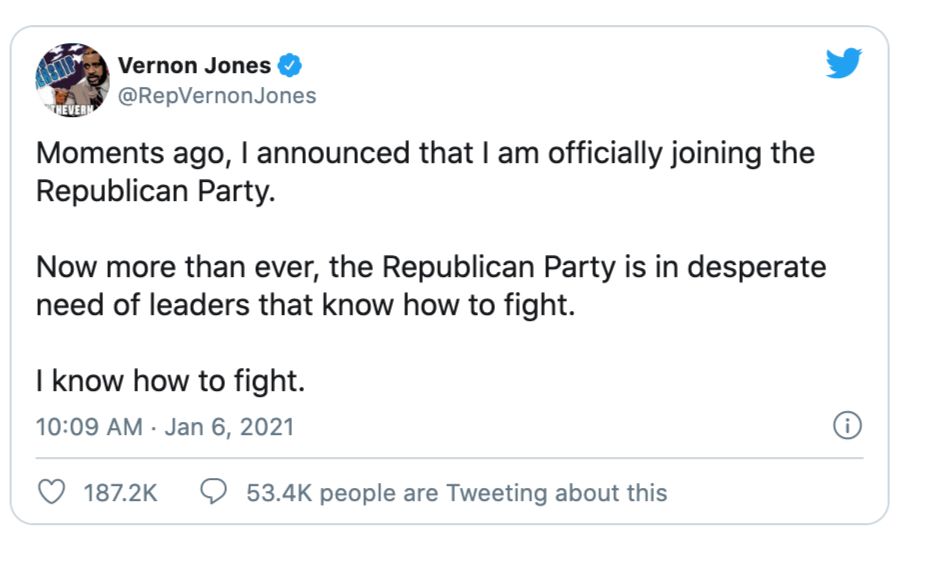 10:24 AM: Joint session of Congress underway as Electoral College votes are counted

10:48 AM: Rudy Giuliani and Professor John Eastman address the crowd at the peaceful rally 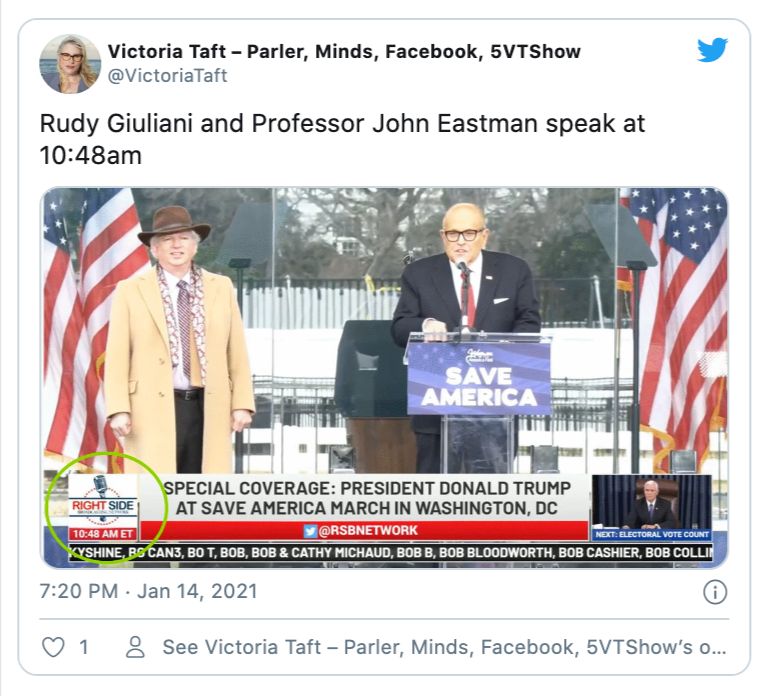 11:12 AM: White House digital hand Dan Scavino announces President Trump will be leaving soon to go to the rally 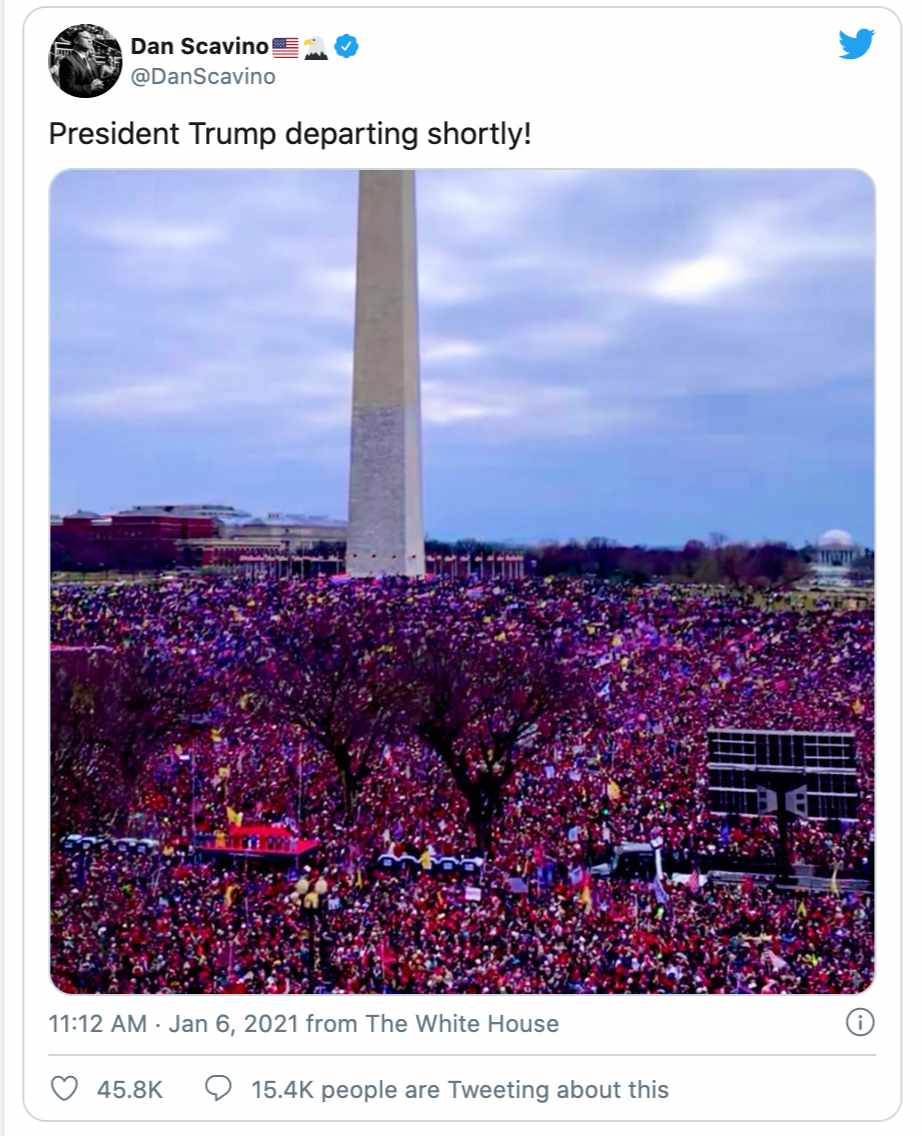 11:30 AM:  J. Michael Waller is a senior analyst for the Center for Security Policy, who specializes in “propaganda, political warfare, psychological warfare, and subversion,” is at the rally and notices nearby riot cops.

Late that morning, at about 11:30, I walked from near Union Station to the Senate side of Capitol Hill on 2nd and D Streets NW and noticed a small number of Capitol Police dressed in full riot gear, with shin guards and shoulder guards. One carried a black baton with side handle. “That’s old school,” Icalled to the officer, giving him a thumbs-up. The police appeared to be readying to board a van or bus, though the Capitol was only 2-1/2 blocks away.

He wonders where they went.

President Trump is scheduled to be at the event at 11:00, but the time stamp on the video shows he actually got there at 11:57.

Trump's official schedule says he was to speak at 11am but according to the time stamps on video, set to Eastern time, he got to the stage at 11:57 pic.twitter.com/izoyPyj8Qz

11:57 AM:  President Trump is introduced at the rally to the tune “God Bless the USA.” 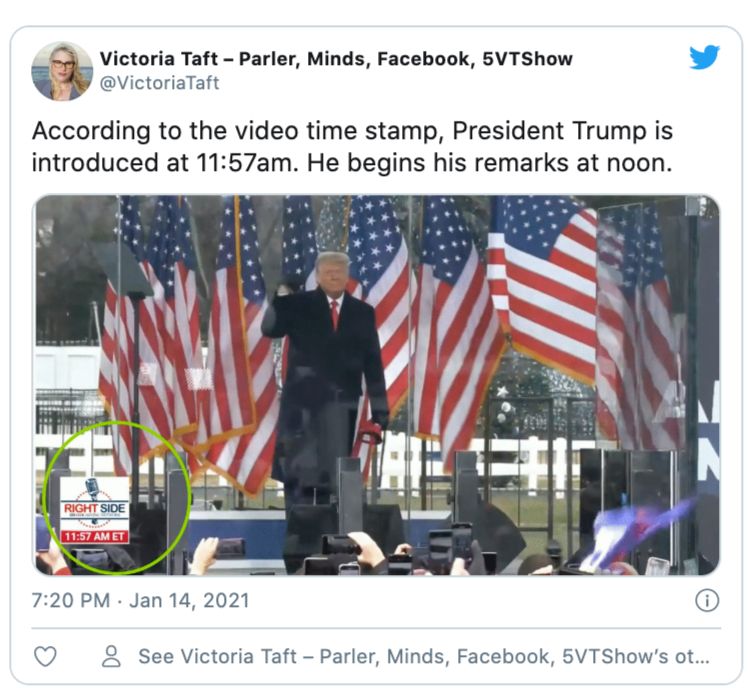 12:20 PM: President Trump says they’ll walk to the Capitol for a rally outside.

“We’re gonna walk down to the Capitol” Trump prepares the crowd for the next portion of the January 6th demonstrations, rallying outside Congress during the Electoral College vote count #DC #SaveAmericaMarch #WashingtonDC #January6th pic.twitter.com/YuMCh34j7o

12:51 PM: The Blaze videographer Elijah Schaffer tweets a video of the crowd and estimates the number of people at more than 100,000 in the overflow area alone. 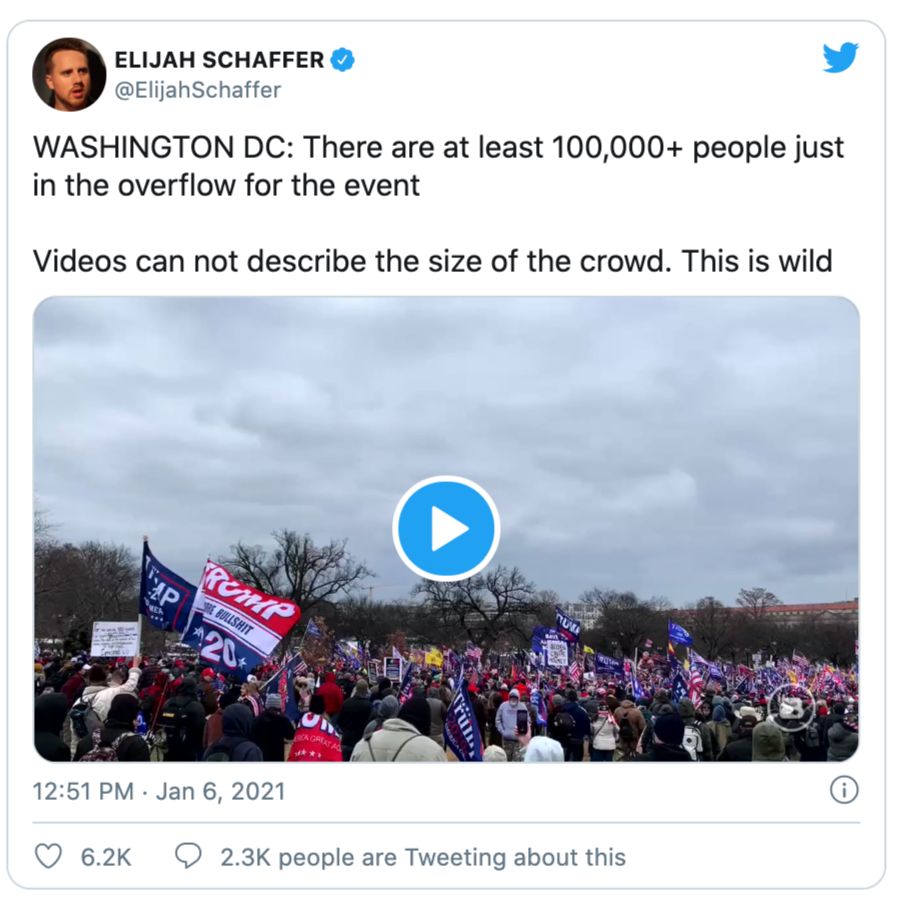 1:03 PM: The breach at the U.S. Capitol Building is first reported by Schaffer.

1:10 PM: Elijah Schaffer is at the Capitol and observes, “This is the craziest thing I’ve ever seen in my life. Thousands, police can’t stop them” 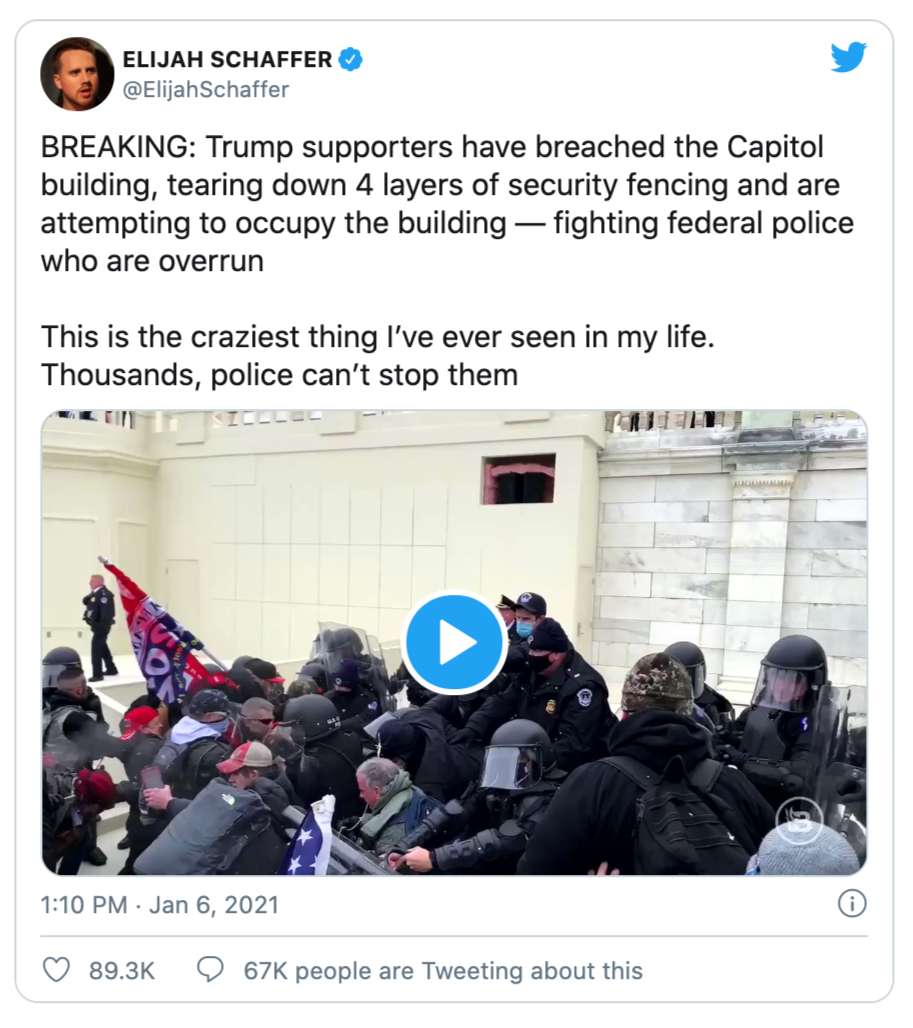 1:11 PM: Dan Scavino of the White House shows this image of The Ellipse from his vantage point. 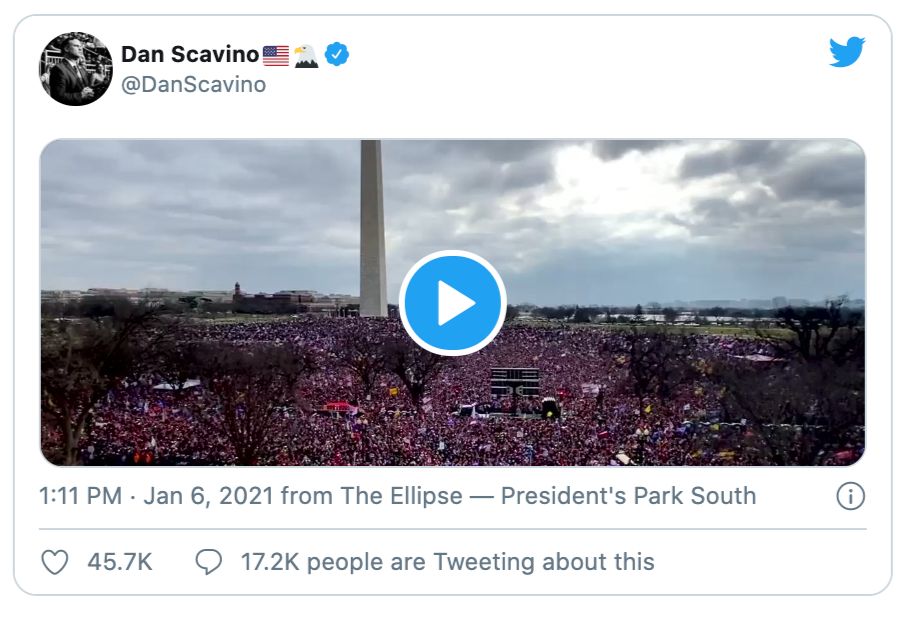 1:12 PM: President Trump leaves the stage after dancing to “YMCA” with the crowd 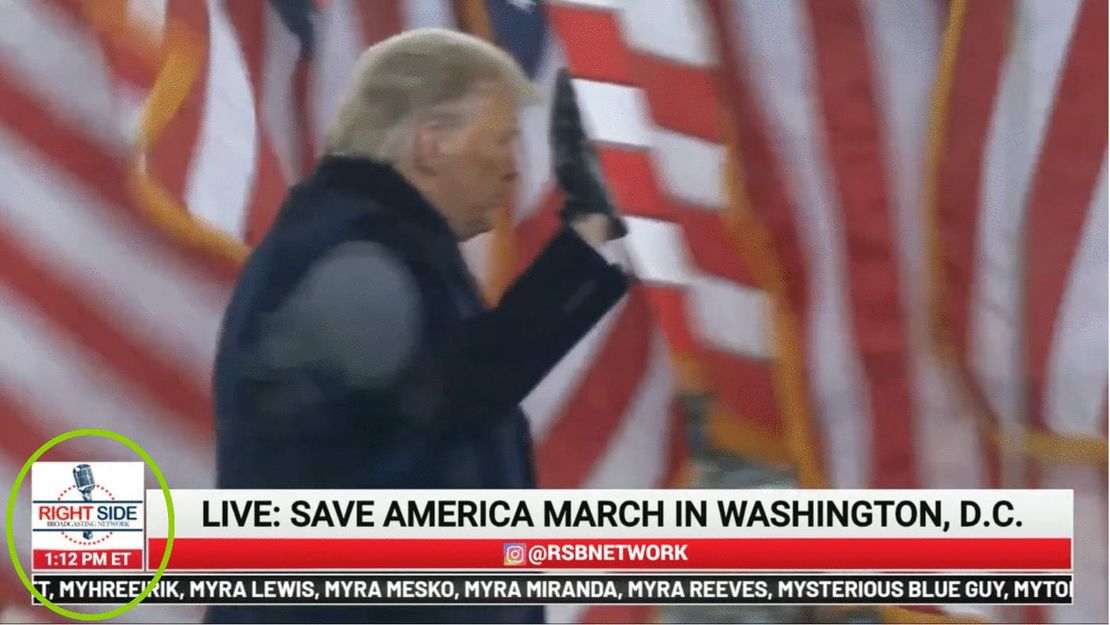 1:17 PM: The Center for Security Policy’s J. Michael Waller is walking with the crowd, but, like the crowd, hasn’t heard of the riot. Cell phone coverage is nearly nonexistent, according to reporters. Waller’s observations, written 1/6 and 1/7, show he believes there were agents provocateurs in the crowd.

1:50 PM: Townhall colleague Julio Rosas shows “Trump supporters” getting into fights with the Capitol Police after they tried to enter the Capitol Building. 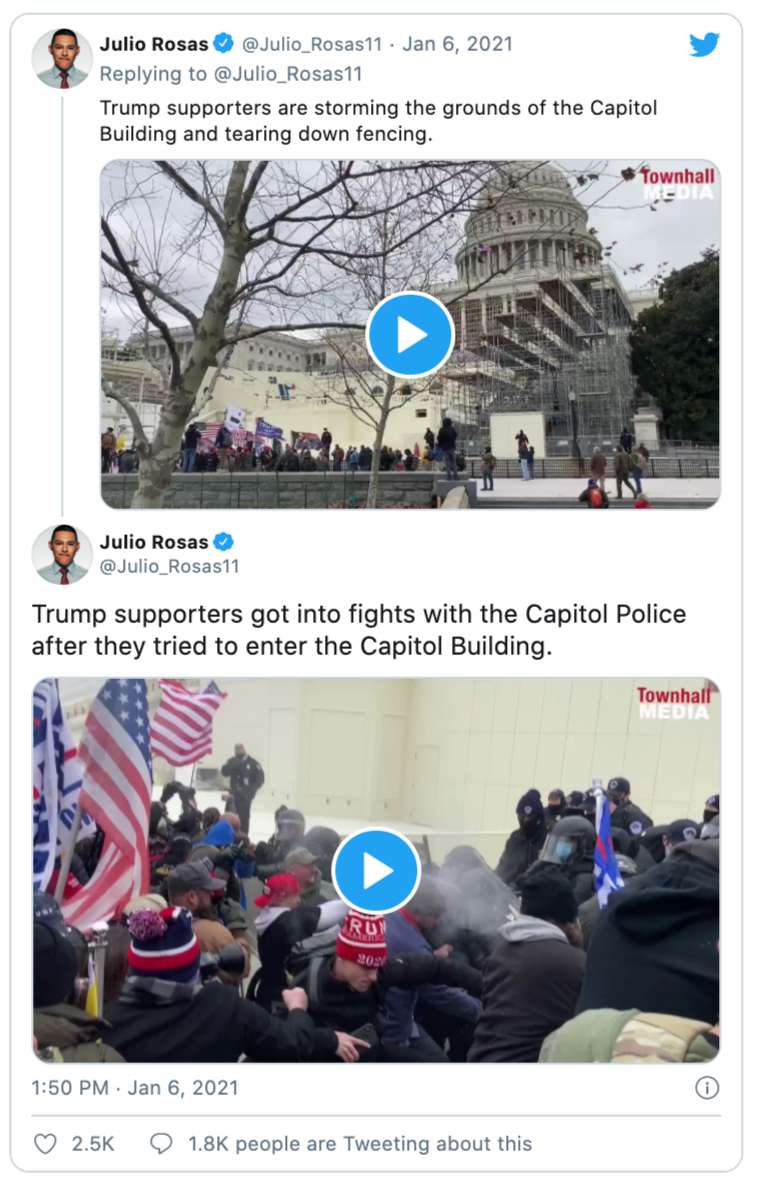 1:51 PM: The Capitol goes on lockdown

1:57 PM: Inside, Capitol Police push back the rioters with pepper spray. 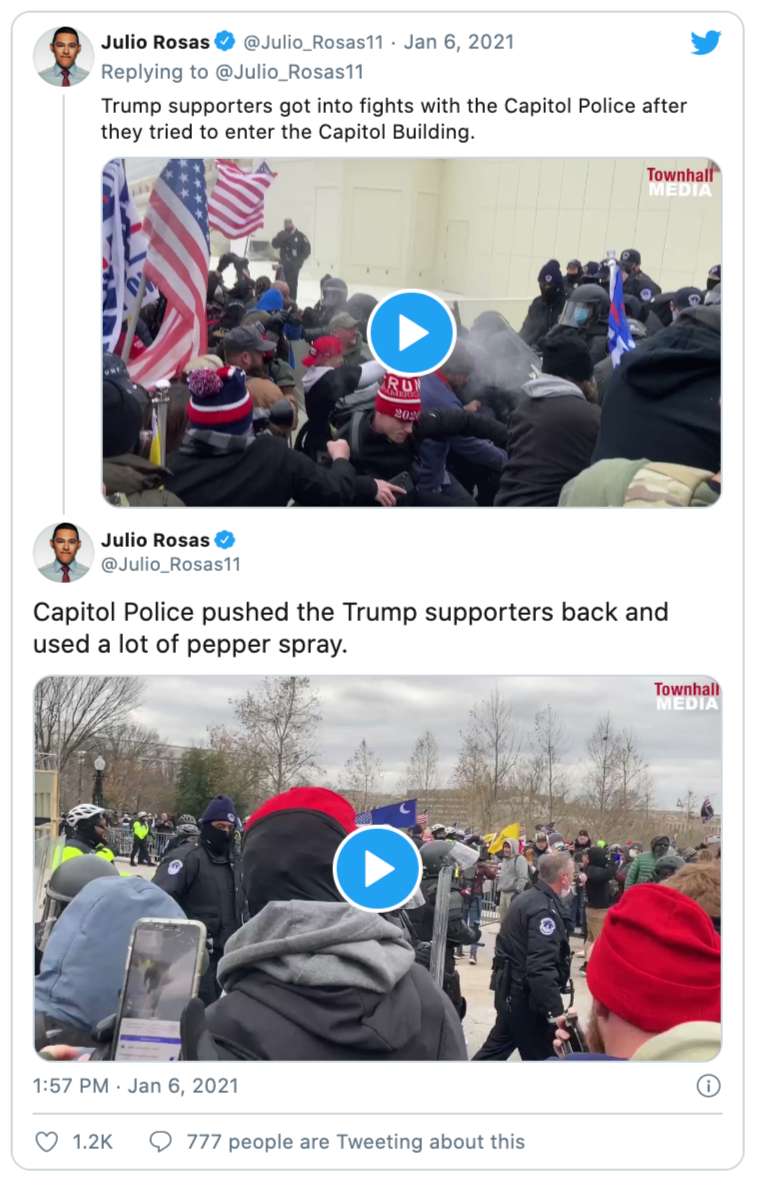 1:59 PM: Capitol Police use flashbangs to try to get the Trump crowd to disperse at Capitol 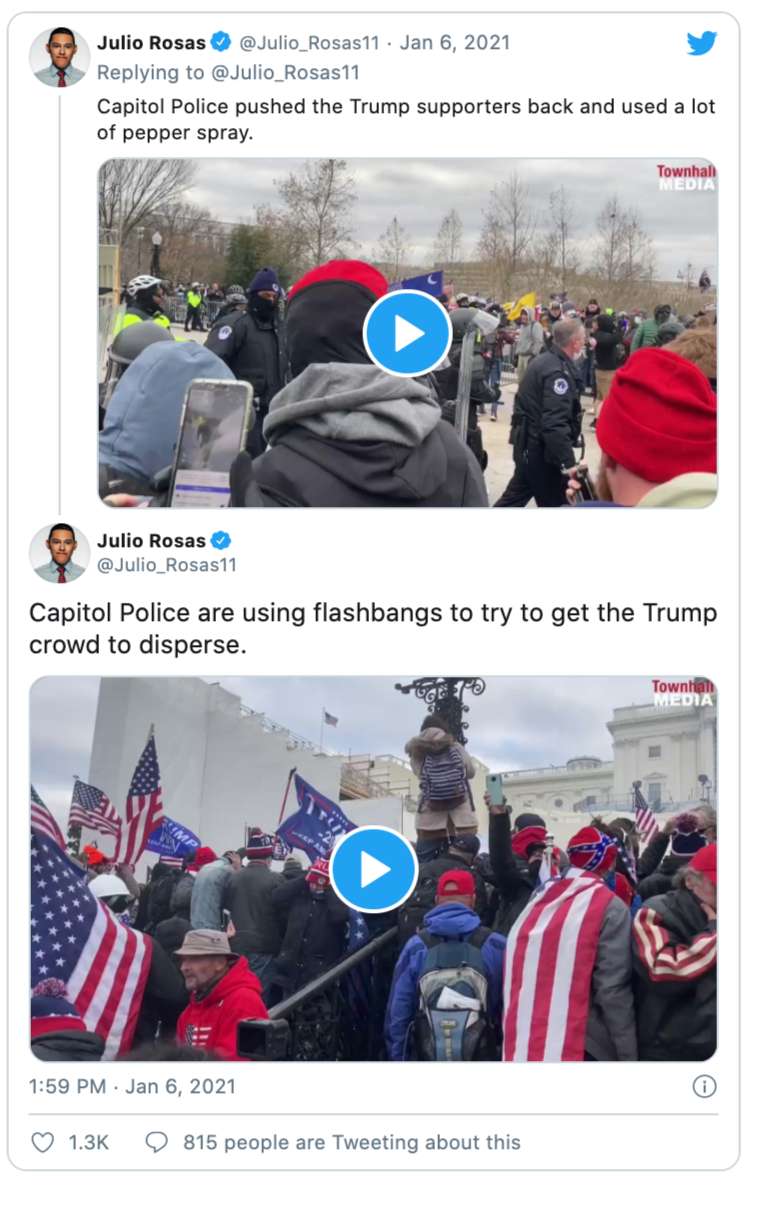 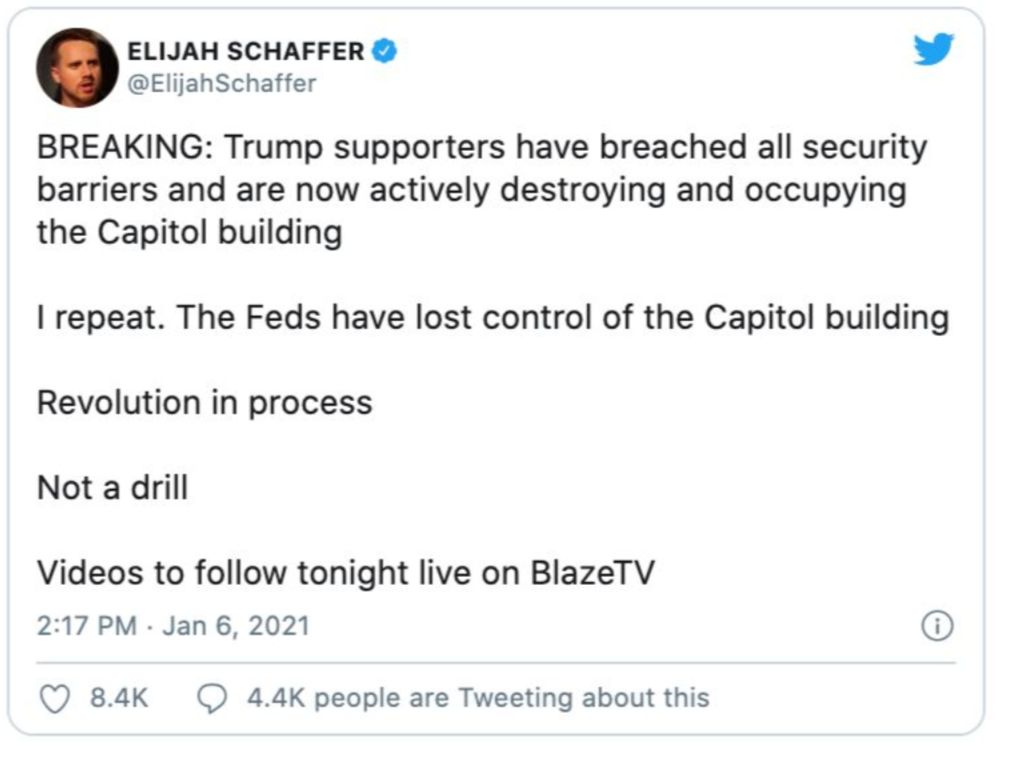 2:22 PM: Police with lights and sirens are seen at the Capitol. 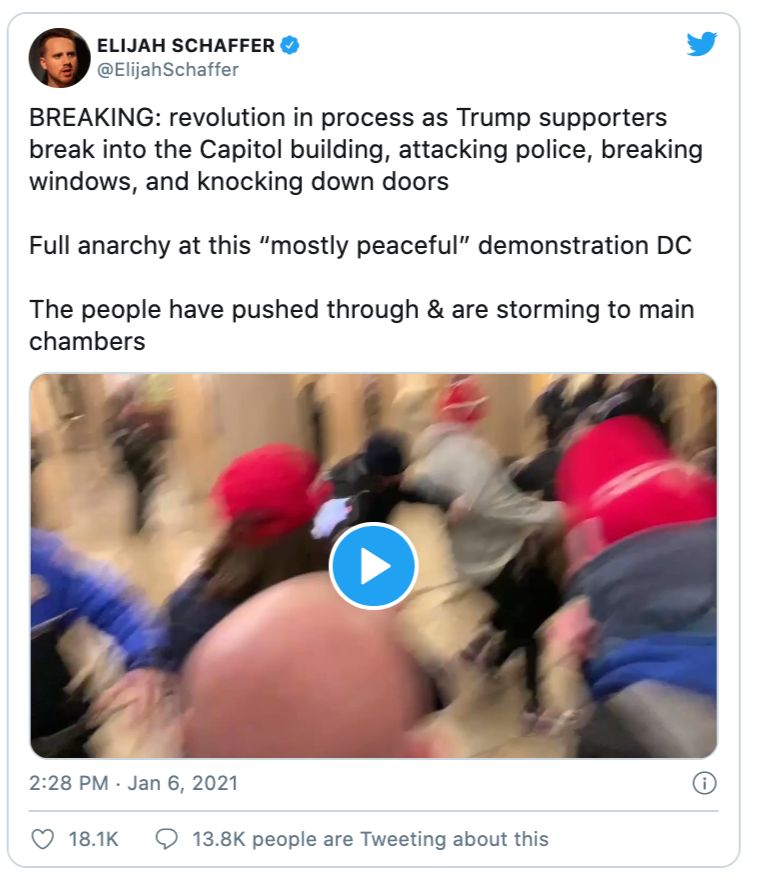 2:40 PM: Capitol Police deploy flashbangs against the crowd teeming to get inside the Capitol Building. The crowd throws objects at police. 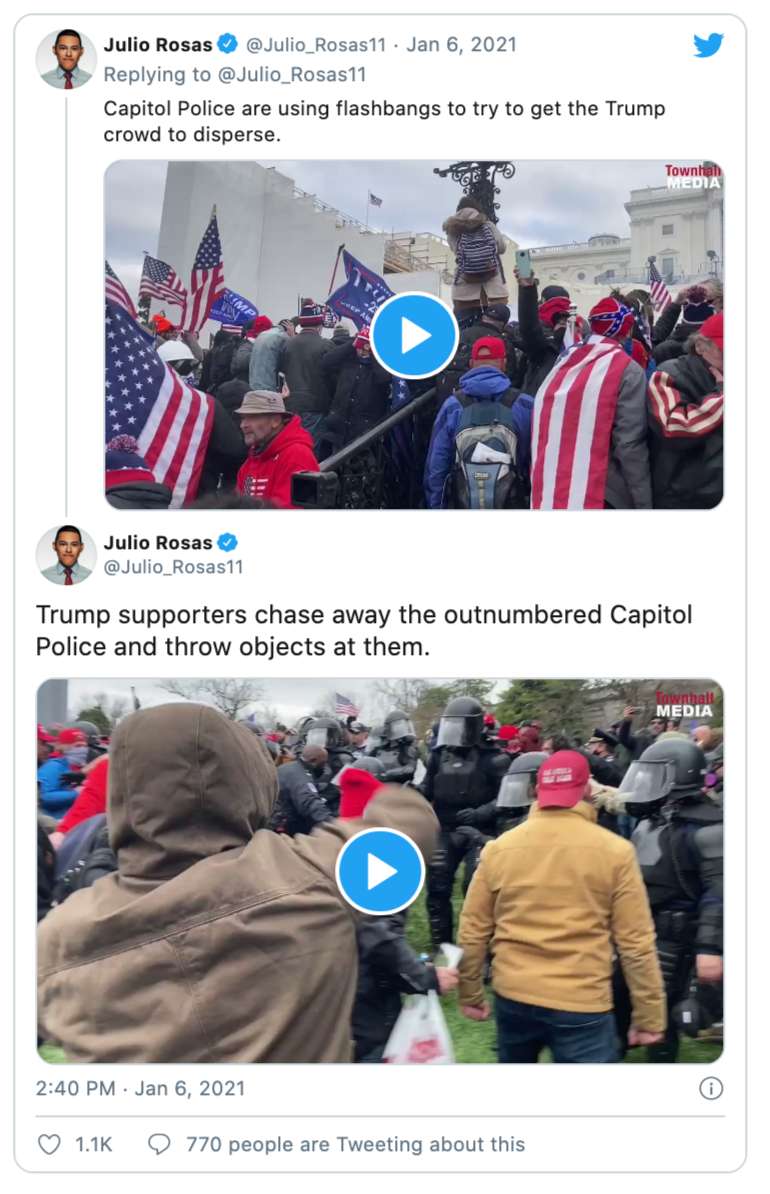 2:49 PM: Police get “aggressive and violent with occupiers” of the Capitol

~3:00 PM: The Center for Security Policy’s J. Michael Waller reports he sees military-style “agents provocateur” ordering him and others “don’t retreat!” even though his friend had a bum ankle and they want to get out.

Other things shouted at the crowd were, “We’re going to the Capitol!” “Forward!” He says the police tear gas “caused pandemonium.”

3:05 PM: Rosas posts photos of the mob inside the Capitol Rotunda 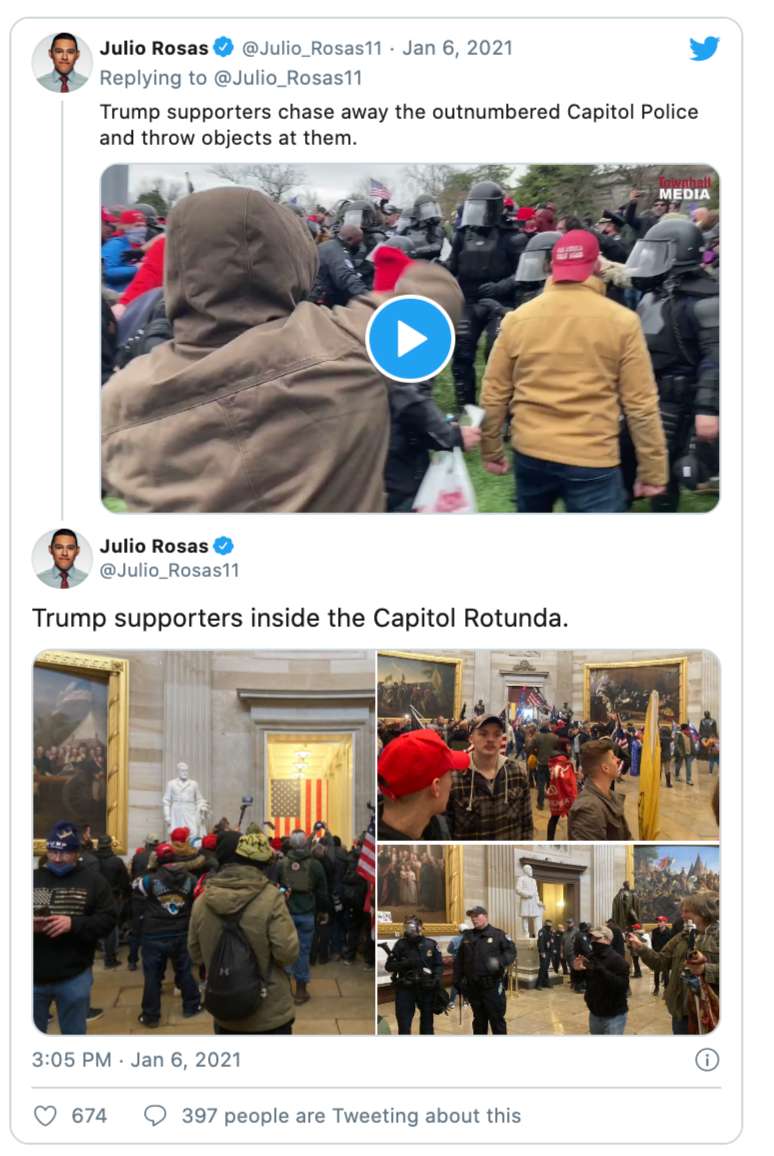 3:16 PM: One America News reports that shots are fired inside the Capitol Building

3:32 Outside the Capitol, Waller says he got out of the scrum, and “a small group of us exited toward Constitution Avenue, north of the Senate Wing. Someone said they had seen a person inside a second-floor window holding a ‘Stop the Steal’ sign. ‘They got into the House and Senate,’ someone told us. ‘It’s crazy.'”

3:34 PM: Rosas reports that Trump supporters fought back after Capitol Police moved in to retake the Rotunda.

3:36 PM: The White House announces National Guard is being mustered 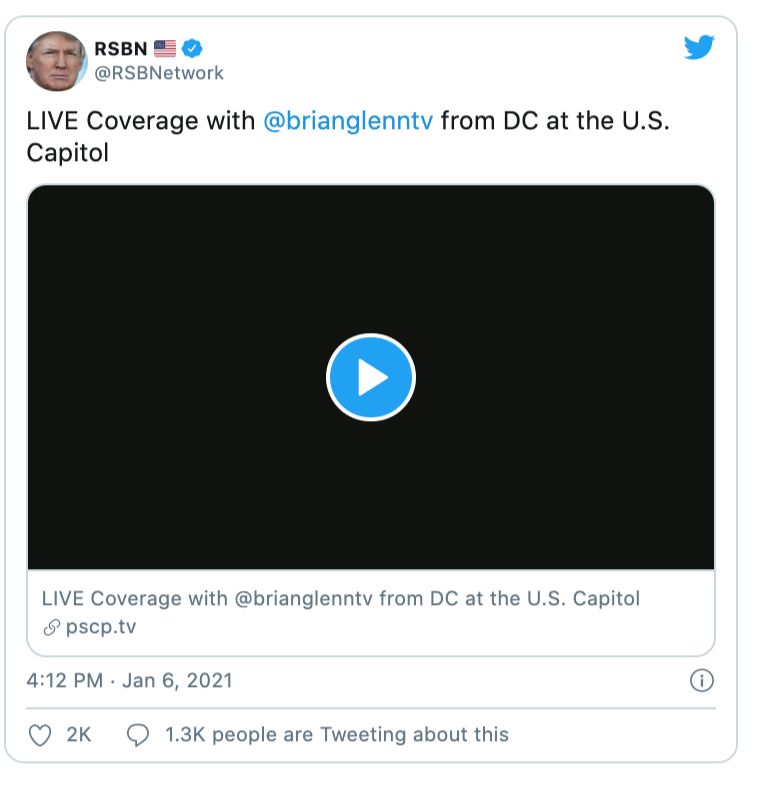 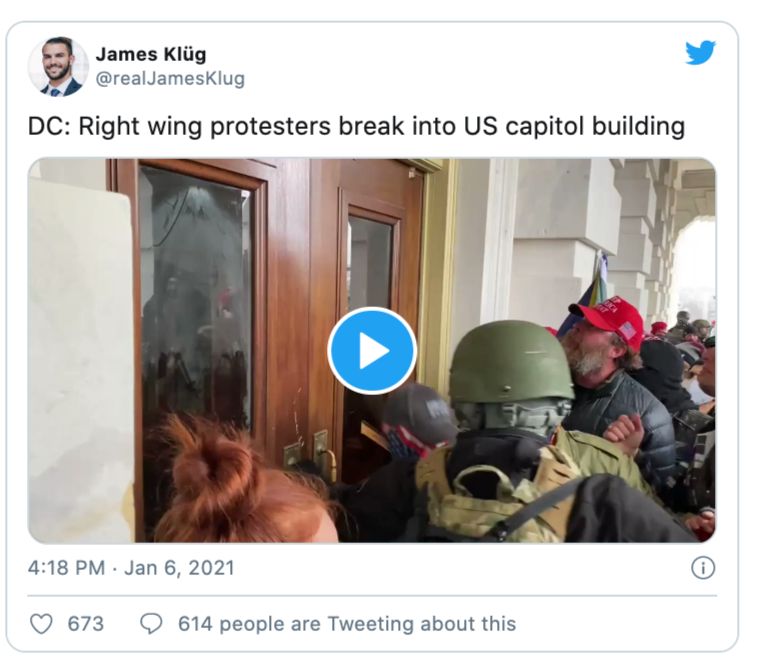 4:25 PM: Twitter censors President Trump’s video to supporters urging people to “go home,” but includes that he understand their anger about the stolen election. 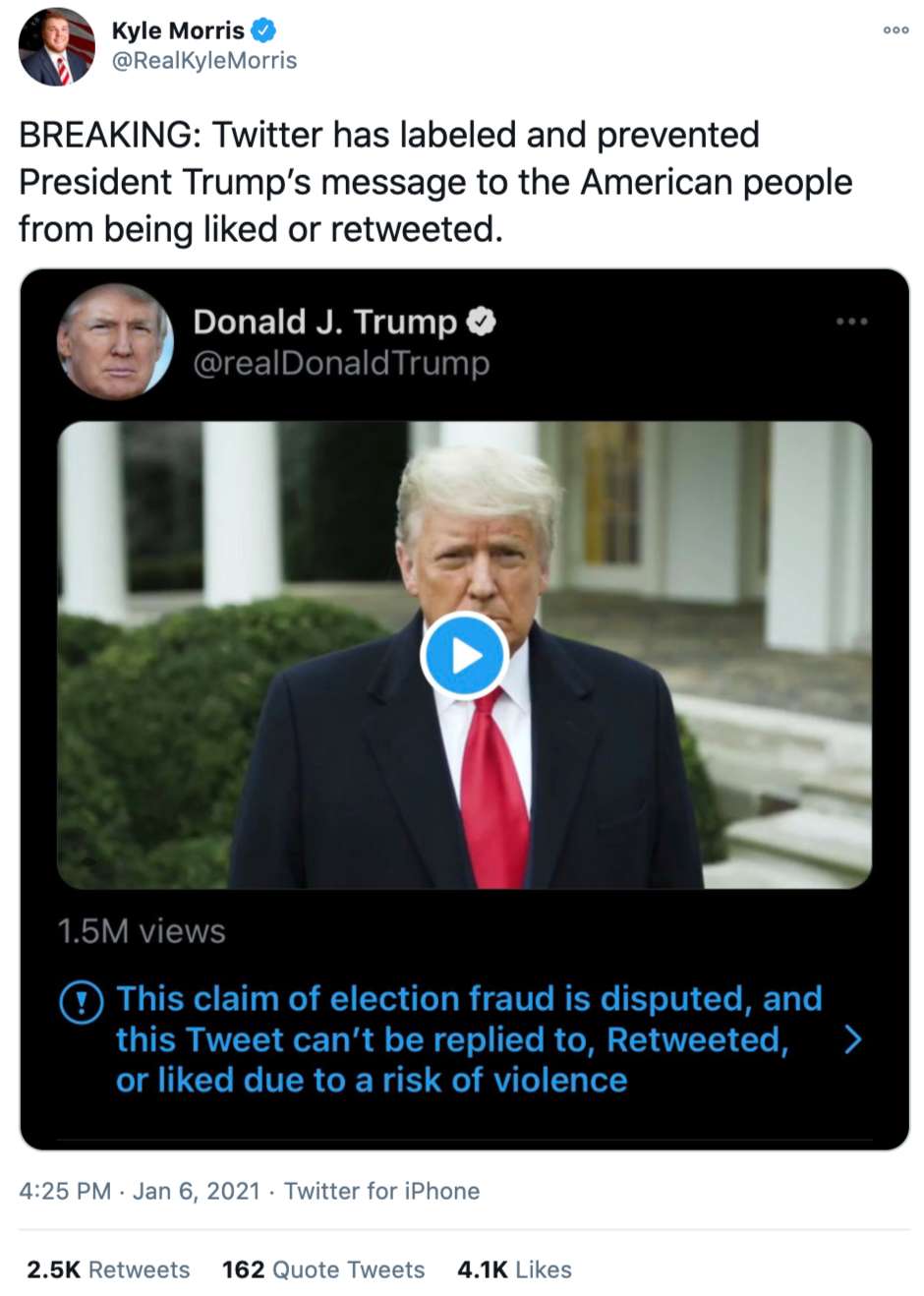 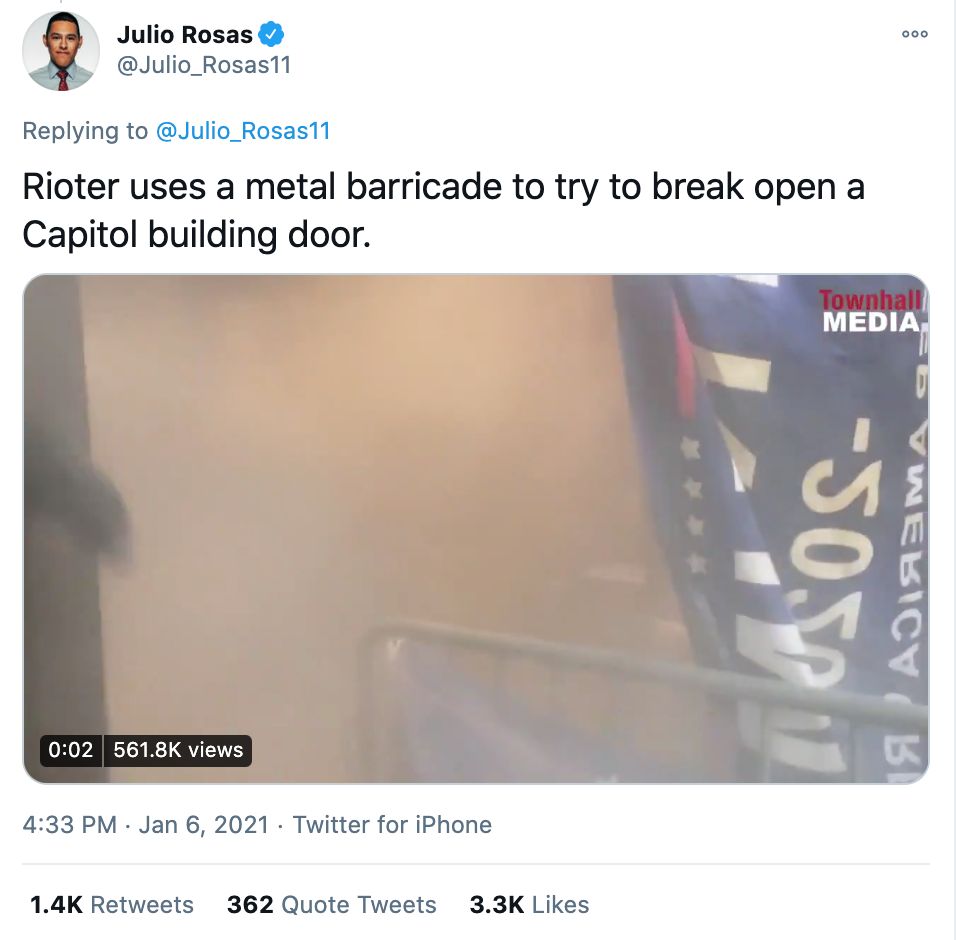 5:46 PM: Police begin clearing the Capitol grounds and the crowds have diminished. 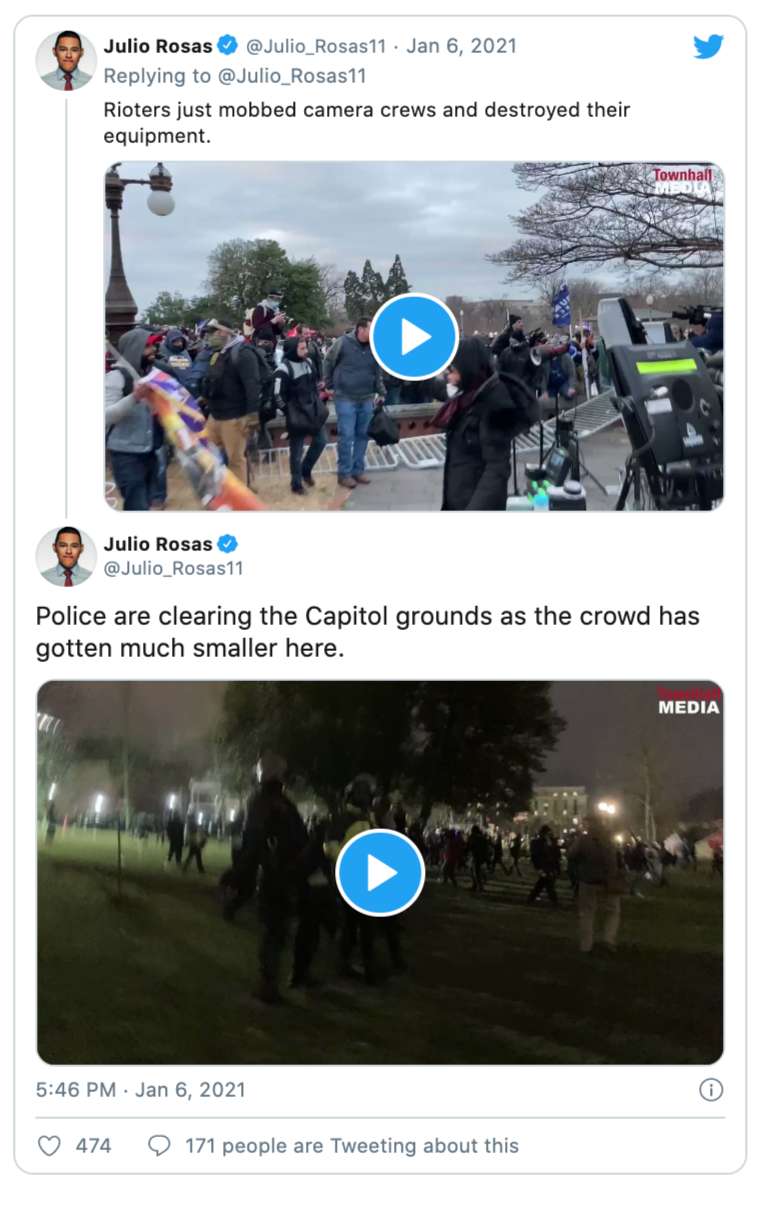 5:46 PM: There’s blood seen on the ground outside the Capitol 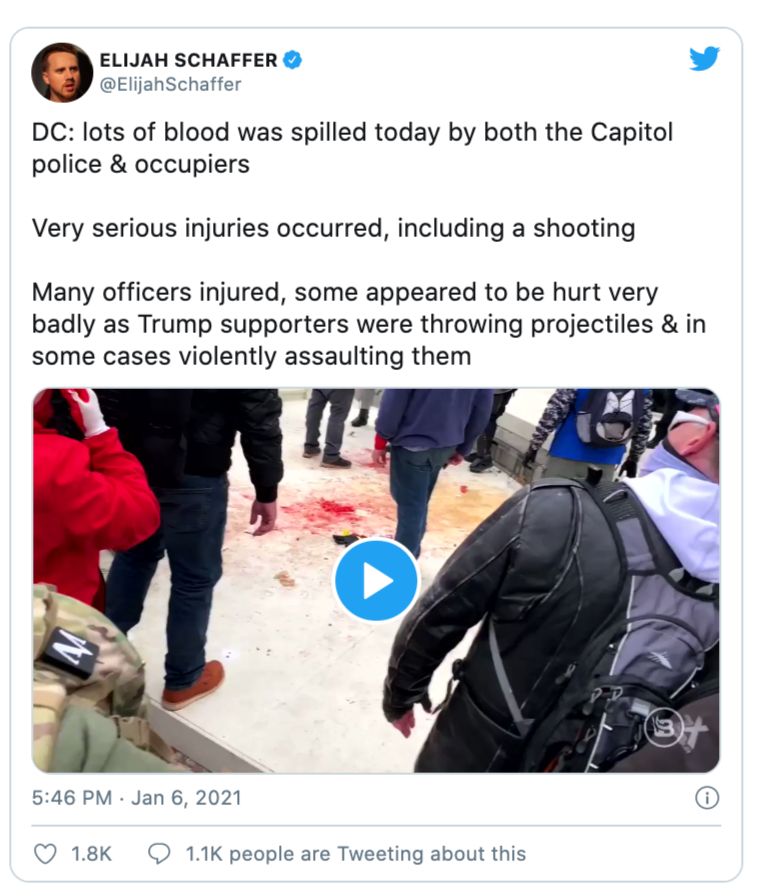 6:22 PM: Schaffer gets word that the woman who was shot by police has died 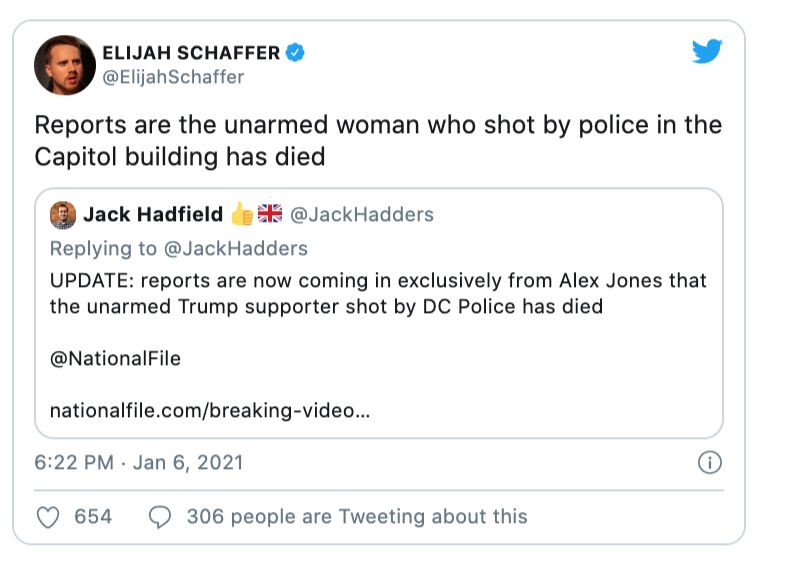 6:30 PM: People are “fighting their way out” of the Capitol 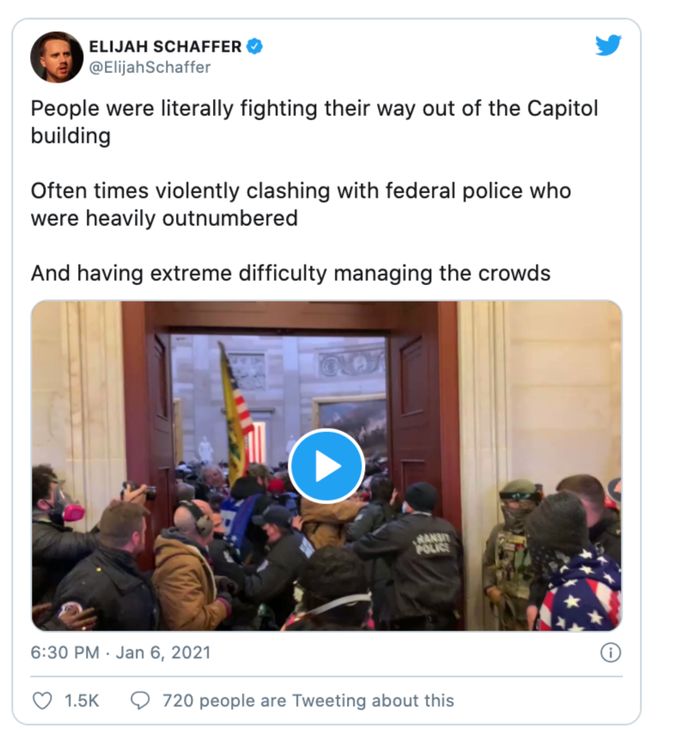 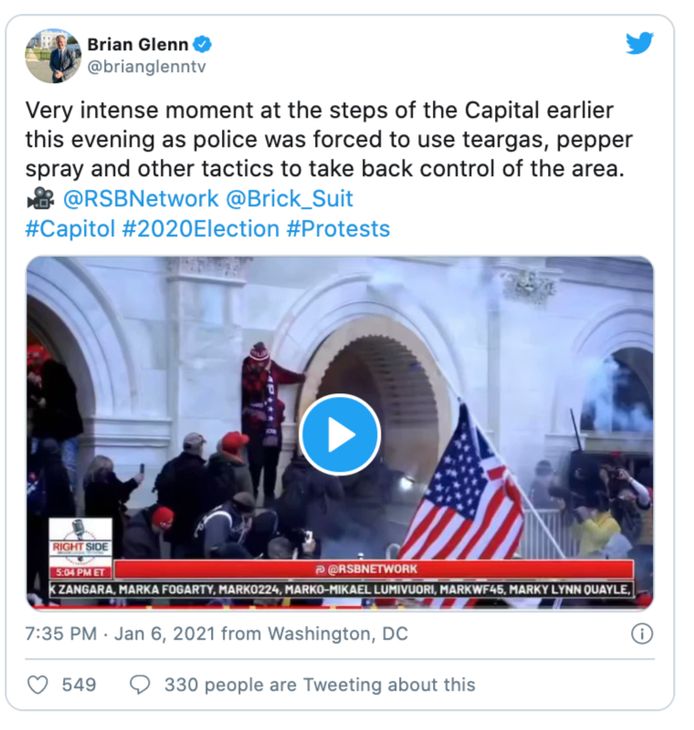 7:58 PM: Elijah Schaffer believes antifa per se wasn’t part of the crowds that he saw based on his experience of covering the antifa and BLM riots. “I also spoke to a DC Antifa organizer & he denied their presence.” It is later determined that one of the agents provocateur is a BLM/antifa supporter. 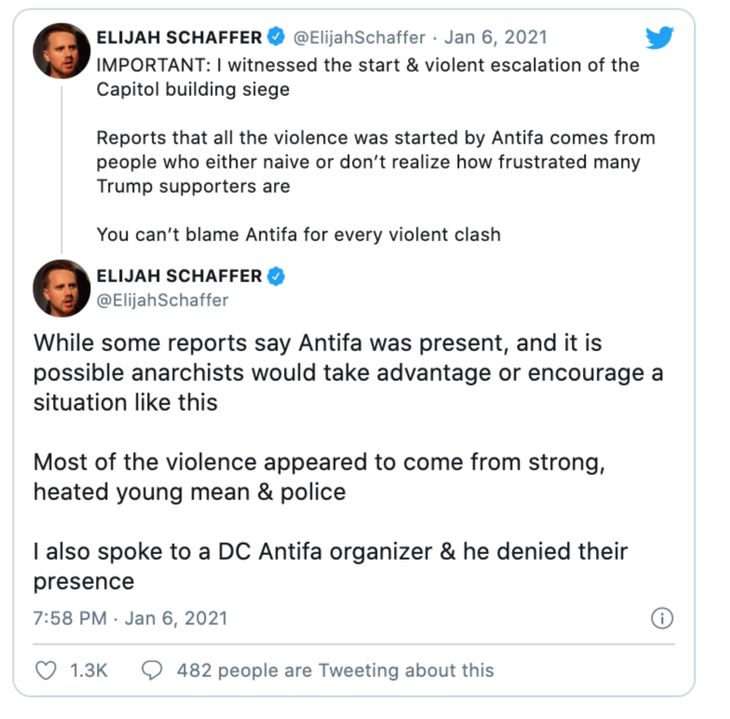 8:11 PM: A visibly angry Mike Pence restarts the joint session of Congress by announcing, “let’s get back to work.” He’s cheered. 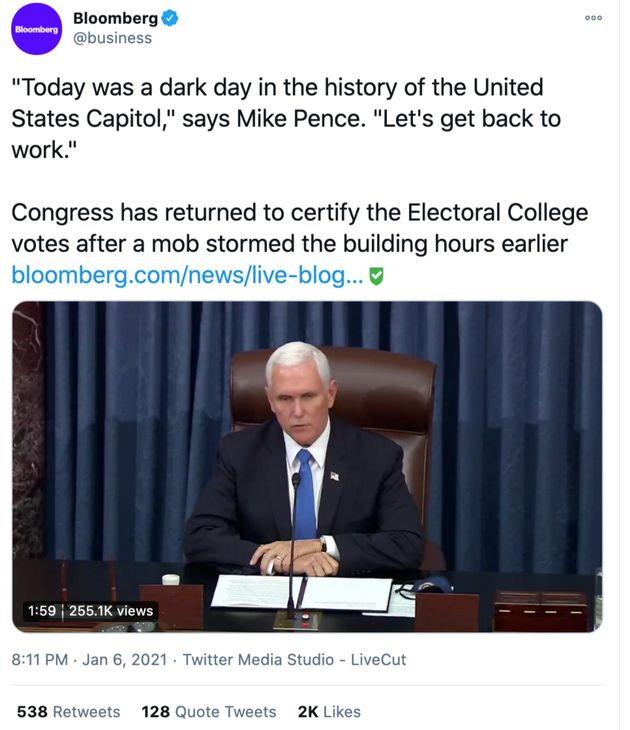 9:29 PM: The Washington Post blames Trump for starting an “insurrection.” The rest of the media adopt the word to characterize the riot.

10:05 PM: The Washington Post urges Congress to “impeach him again.” 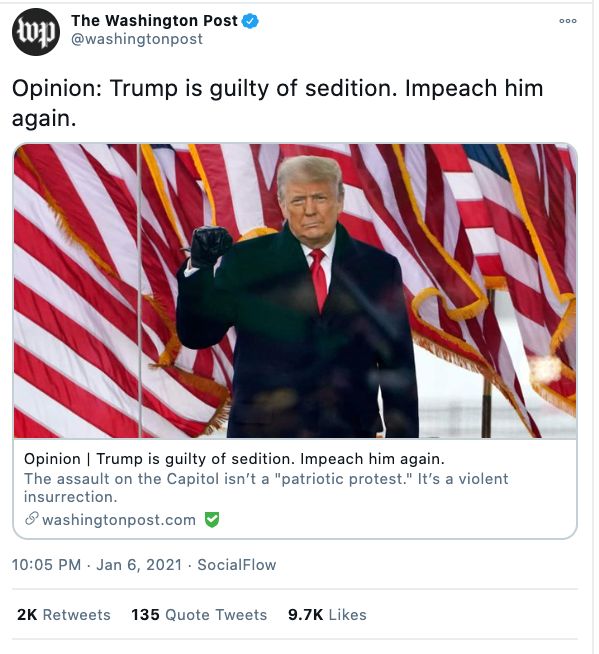 Our timeline show President Trump was still on stage 12 minutes after the Capitol Building breach started. He was undoubtedly shaking hands with organizers, saying goodbyes, etc., before being driven back to the White House, which would have added to his time at the event.

As Waller reported, there were several groups of bad actors who looked organized and were separate from the rally-goers. He believes they were paramilitary types and called them agent provocateurs. Ironically, Waller specializes in “propaganda, political warfare, psychological warfare, and subversion,” so we guess he’d know it when he saw it.

As my PJ Media colleague Matt Margolis reported, even CNN has come to the belief that there were people who appeared to have planned and executed the incursion, who were distinct from the rally crowd.

The president was immediately excoriated for allegedly encouraging this assault on the Capitol Building.

The Washington Post demanded President Trump be impeached before the stench of tear gas was cleared from the Capitol.

The Democrats took the Post’s advice before the full set of facts was known. The president was impeached by Democrats eager to sully his reputation and stop him from running for office ever again—before they knew the facts and had done their due diligence.

It appears that, based on this timeline, the president was not just wrongly blamed for inciting the riots, his rhetoric that day apparently had nothing to do with fomenting them.

You can blame the president for many things. You can blame him for his graceless behavior after failing to win his electoral cases in court, as flawed as those decisions were. You can blame him for being a fighter. But it’s a real stretch to blame him for starting the fight at the Capitol. If you do that, you must blame Democrats for their incendiary language in support of the antifa and BLM riots of the past few years.

History should vindicate President Trump. It just depends on who’s writing it.

See his speech and the timestamps of the live broadcast yourself.

Victoria Taft is the host of  “The Adult in the Room Podcast With Victoria Taft” where you can hear her series on “Antifa Versus Mike Strickland.” Find it here. Follow her on Facebook,  Twitter, Parler, MeWe, Minds @VictoriaTaft

Did CNN Accidentally Prove That Trump Did NOT Call for Violence at the Capitol?

Did You Notice the Jan 6 Crowd Cheered When Trump Touted Harsher Penalties for Monument-Trashers?

Did the Capitol Police ‘Let In’ the Protesters?