The iconic radio host has had a presence on Twitter for years, but recently set up a new account that he actively used in the months leading to the election.

At first, many people thought that Limbaugh, “America’s Anchorman,” who’s battling terminal lung cancer, was removed from Twitter. But Limbaugh left the platform on his own terms: He deactivated his account.

Rush Limbaugh's account was not suspended by Twitter…he deactivated it.

Twitter will always note when it's a suspension… pic.twitter.com/tOqpa0TmhQ

Listeners to his show know Limbaugh was never a big fan of Twitter. He complained the platform was a distorted kaleidoscope of extremism, virtue-signaling, and false narrative-setting. It was “not real America,” he often said on his show. He believed that a lazy media, dazzled by the platform and their own cleverness, used it as a replacement for talking to real people.

Fill-in for the radio host, Todd Herman, noted to @Jack, the head of Twitter, that poor Rush will have to rely on his 35 million radio listeners to get his message out.

Oh, my oh my . . . whatever will Rush Limbaugh, with his radio audience that dwarfs active @Twitter reach, do without @Jack (pictured, below). Now all Rush has is 35 million radio listeners. pic.twitter.com/WGT7ZR3H15

Limbaugh left of his own accord but the organized Left had begun a campaign against him and other conservatives on Twitter and other platforms, as I reported at PJ Media.

Several hit lists filled with the names of prominent conservatives have circulated on the platform, blaming them for inciting the Capitol riot. Michelle Obama also called on Big Tech (see my story nearby) to ban President Trump from all platforms after Wednesday’s riot. It was all cheered on by the Leftist George Soros narrative-setting group Media Matters for America.

On Friday, Facebook also went after Limbaugh, throttling his pages because the zeros and ones in the content-moderating department decided the radio host was purveying fake news. 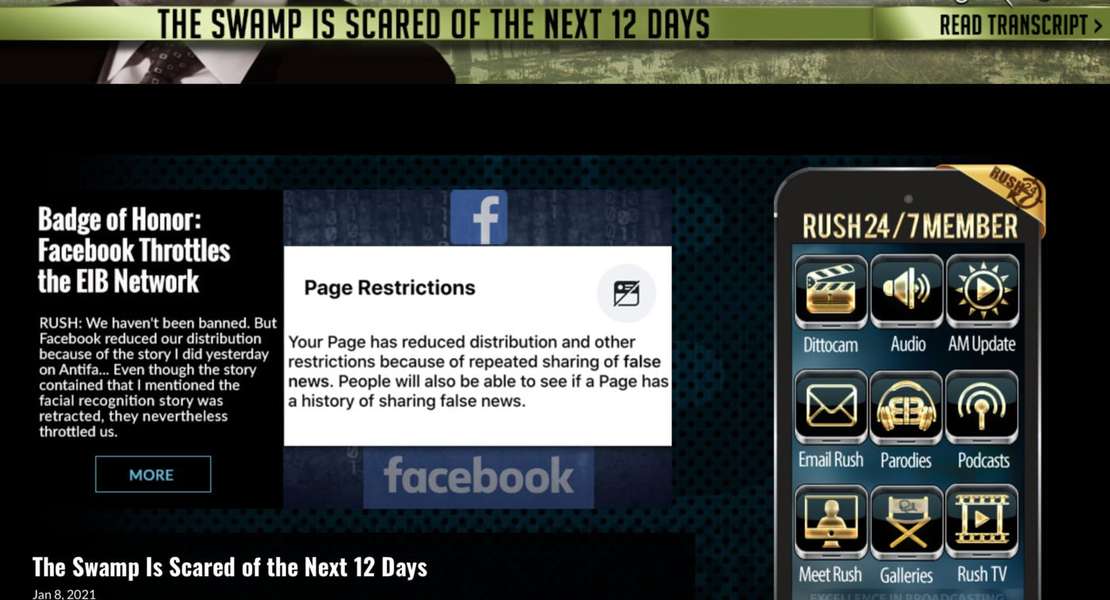 Leftists who literally asked rioters to hit the streets – looking at you Ayanna Pressley – last summer oddly never quite made it to any hit list. Nancy Pelosi, who couldn’t understand why there wasn’t more unrest in the streets, wasn’t cut off Twitter for inciting riots, either.

No one on the right called for riots. They spent the entire last year calling for an end to riots.

Now Limbaugh’s gone from Twitter and in leaving sent a message to Big Tech that he noticed what they did there. Limbaugh is a huge fan of tech. He often relates what he sees on the tech blogs on his program and is a huge and happy consumer of Apple products, often beta-testing their latest products and giving devices away on his show.

By leaving, he also encouraged other conservatives to leave the platform. Undoubtedly many more will.

Big Tech is purging the conservative voice in America while leaving the Ayatollah death-to-America-toss-gays-from-the rooftop crowd on Twitter.

You break it, you own it.

Big-Tech CRACKDOWN: Twitter Just Cut Off the @POTUS Account of the President of the United States of America

FLASHBACK: Nancy Pelosi Called for ‘Uprisings’ Against the Trump Administration