On Wednesday, NBA Lakers star LeBron James tweeted something that looked very much like an incitement to murder a police officer. James rushed to conclusions about the shooting of 16-year-old Ma’Khia Bryant, a black girl who appears to have been lunging at someone with a deadly knife when the cop shot her. James later took down the tweet, but he claimed that this shooting represents yet more evidence of systemic racism.

President Donald Trump took him to task on Thursday night.

“LeBron James should focus on basketball rather than presiding over the destruction of the NBA, which has just recorded the lowest television RATINGS, by far, in the long and distinguished history of the League,” Trump said in a statement. Recent ratings are indeed at an all-time low after the NBA painted the politically-charged slogan “Black Lives Matter” on its courts. (While Americans agree that black lives do matter, self-declared Marxists lead the Black Lives Matter organization and many of those organizing under the Black Lives Matter slogan perpetrated riots last year.)

Recommended: LeBron James Incited Millions to Murder a Police Officer. Will It Cost Him Anything?

Of James’ remarks, Trump said, “His RACIST rants are divisive, nasty, insulting, and demeaning. He may be a great basketball player, but he is doing nothing to bring our Country together!”

As my colleague Bryan Preston reported earlier today, LeBron James tried to stir up a mob against the police officer who shot Ma’Khia Bryant.

“YOU’RE NEXT,” he tweeted with an hourglass emoji and the hashtag “#ACCOUNTABILITY.” 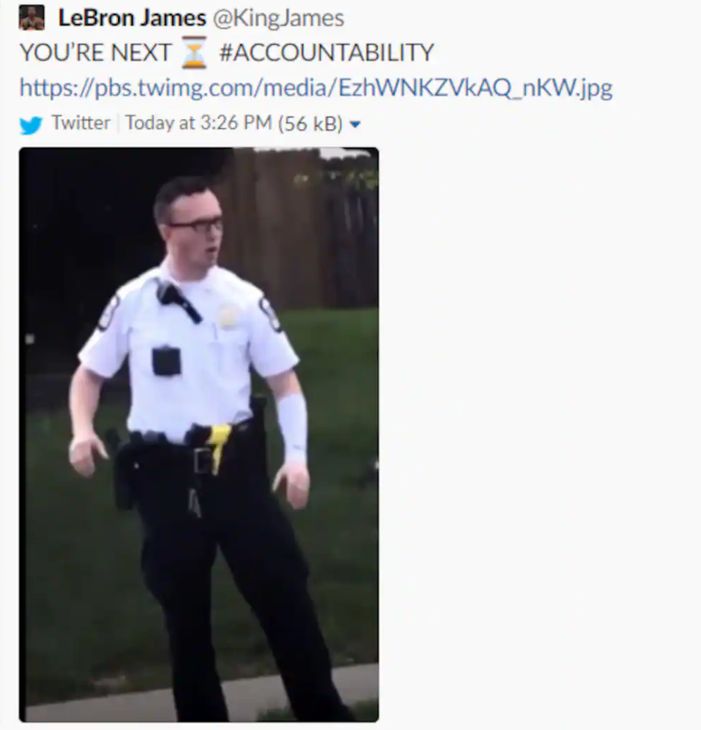 Given the context of the jury convicting Derek Chauvin of murder against George Floyd, James may have been suggesting that this police officer will also face a murder conviction. However, given the high tensions following high-profile shootings like this one — and the violent riots that often break out before the truth fully emerges — it is reasonable to claim, as Preston did, that this tweet amounted to incitement.

Ironically, the shooting of Ma’Khia Bryant — tragic though it is — appears to represent a case in which police use of force is actually justified. Columbus police released body cam footage of the shooting available very quickly, and the footage shows that Bryant was wielding a large knife, apparently with intent to kill someone.

As Preston noted, “The responding officers had split seconds to decide what to do and could see the knife in the girl’s hand, as well as her behavior, which portrayed intent to kill by any reasonable definition.”

In a life-or-death situation, “firing to wound” is not an option. Police officers are trained to aim at center mass, because that’s the most likely target to hit.  If the cop missed Bryant, he likely would have shot one of the bystanders, making the situation even worse.

Recommended: Riots After the Duante Wright Shooting Show Just How Much of a Powder Keg Minneapolis Is Right Now

Bryant’s death is tragic, even if the police officer’s use of force was justified. Situations like this illustrate just how difficult a police officer’s job truly is — and why it is important for the public to suspend judgment when a shooting takes place.

LeBron James deleted his original tweet, but he continued to insist that the Bryant shooting fit the mold of unjust police shootings of black people.

“I’m so damn tired of seeing Black people killed by police. I took the tweet down because its being used to create more hate -This isn’t about one officer. it’s about the entire system and they always use our words to create more racism. I am so desperate for more ACCOUNTABILITY,” James tweeted.

I’m so damn tired of seeing Black people killed by police. I took the tweet down because its being used to create more hate -This isn’t about one officer.  it’s about the entire system and they always use our words to create more racism. I am so desperate for more ACCOUNTABILITY

LeBron James used this one incident — where the cop appears to have been justified in opening fire — to condemn police as an institution of being racist, and then said it “isn’t about one officer,” as if the evidence against his narrative in this case was immaterial.

Americans want accountability for police shootings that truly were unjust. The outrage over the deaths of George Floyd and Ahmaud Arbery demonstrate that abundantly. Yet these cases are not usually as cut-and-dried as they appear — and the fact that the legacy media seizes on every police shooting with a black victim obscures the fact that black people are far more likely to die at the hands of a fellow civilian than they are at the hands of a police officer.