On Friday, the United Nations announced an investigation into “systemic racism” in “law enforcement agencies,” following the protests and riots over the heinous police killing of George Floyd. Also in that announcement, UN experts condemned Attorney General William Barr’s declaration that antifa agitators are “domestic terrorists,” and warned that this kind of “loose use of terrorism rhetoric undermines legitimate protests.” The UN Geneva account shared this statement on Twitter with an antifa flag, subtly endorsing the agitators.

“UN [Human Rights] experts express profound concern over a recent statement by the US Attorney-General describing [antifa] and other anti-fascist activists as domestic terrorists, saying it undermines the rights to freedom of expression and of peaceful assembly in the country,” UN Geneva tweeted. 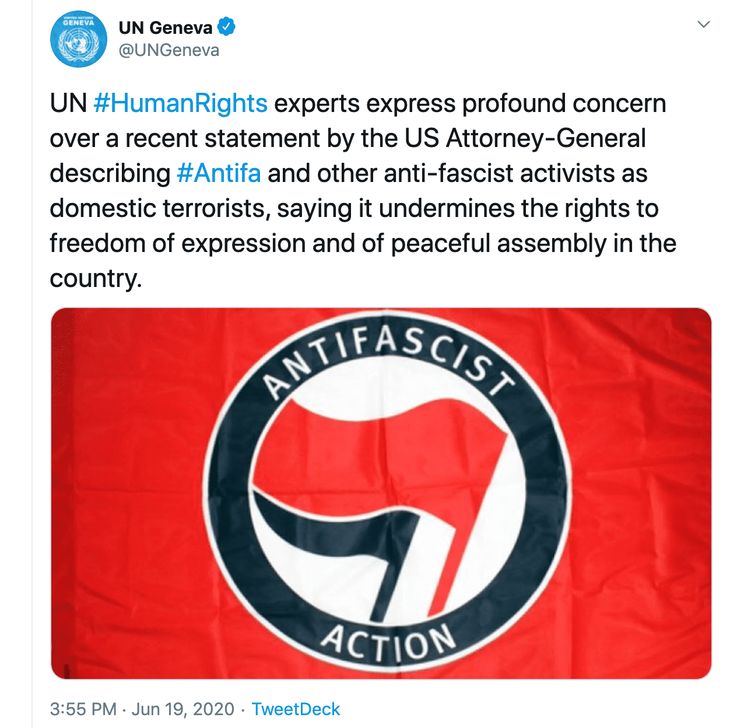 The UN deleted the tweet later that day, after many voices called on the U.S. to defund the UN in response to the international body’s support for antifa.

“The United States is the #1 funder of the United Nations,” Benny Johnson tweeted. “The U.S. just recently recognized Antifa as a Terrorist Organization. The UN just sent out a Tweet in support of Antifa. Why are we funding them? [Defund the UN.]”

The United States is the #1 funder of the United Nations

The U.S. just recently recognized Antifa as a Terrorist Organization.

The UN just sent out a Tweet in support of Antifa.

The rapper ZUBY responded to the UN tweet by laughing at the idea of antifa riots described as “Peaceful assembly.” He then added, “Defund the UN.”

Laughter is indeed warranted. The protests over the death of George Floyd devolved into looting, vandalism, and arson across America that destroyed black lives, black livelihoods, and black monuments. Rioters damaged or destroyed roughly 700 buildings in Minneapolis alone.

While The Washington Post claimed that there was no connection between the destructive riots and antifa, some of those arrested for arson and throwing Molotov cocktails did indeed identify themselves with antifa.

Yet UN “experts” condemned Barr’s attack on antifa as a “domestic terrorist” outfit.

“It is regrettable that the United States has chosen to respond to the protests in a manner that undermines these fundamental rights.”

Ni Aoláin did not condemn the riots and destruction that have taken American lives and livelihoods. She did warn, however, that “the loose use of terrorism rhetoric undermines legitimate protests and dampens freedom of expression in the United States, which has been a hallmark of US constitutional values, and a beacon far beyond its shores.”

Perhaps the UN rapporteur should take a look at the buildings destroyed, the people killed, and the monuments defaced in the riots. She might want to rethink her claims that condemning antifa violence somehow constitutes an attack on the right to “peaceful assembly.”

Secretary of State Mike Pompeo responded to the UN’s racism investigation by condemning the UN Human Rights Council as “a haven for dictators and the democracies that indulge them.” He argued that “if the Council were serious about protecting human rights, there are plenty of legitimate needs for its attention, such as the systemic racial disparities in places like Cuba, China, and Iran.”

Indeed, the coronavirus crisis threw China’s very real systemic racism into sharp relief, even as the riots revealed antifa’s violence. While the UN’s Human Rights Council has rightly expressed alarm over China’s detention of more than one million ethnic Uyghurs in Xinjiang, it seems more focused on berating the U.S. over the horrific death of one black man at the hands of police. This international focus on the U.S. allows China to distract the world from its coronavirus malfeasance and its aggression in India.

The UN should do far more than just deleting this pro-antifa tweet. It should join the U.S. in condemning antifa violence and the riots that destroyed black lives, black livelihoods, and black monuments. Instead, it appears to be standing by the claims of the tweet — that President Donald Trump and William Barr somehow undermine “peaceful assembly” by condemning the likely agitators behind violent riots.