Cook Political Report calls Florida redistricting the Republicans’ “biggest weapon” in the fight to retake Congress in the 2022 midterm election.

In Friday’s report [paywalled], political analyst David Wasserman looks at how Florida Republicans might re-draw the map and concludes: “Dems are in big trouble.”

Not just in Florida, but in Washington in January 2023, when the next Congress is sworn in.

According to Wasserman’s analysis, “Republicans could stretch their current 16R-11D lead in House seats to as wide as 19R-9D – erasing most of Dems’ current House margin.

If you noticed that 16+11 does not equal 19+9, very good. Florida will gain a 28th congressional seat next year, largely at New York’s expense. Florida was growing faster than New York before the pandemic, but the ham-fisted Cuomo-de Blasio lockdowns caused untold thousands of additional New Yorkers to flee for the Sunshine State. Florida Governor Ron DeSantis says they’re largely registering as Republicans, too.

Whatever the case, the nation’s new third-largest state looks set to greatly increase its GOP representation in the House. 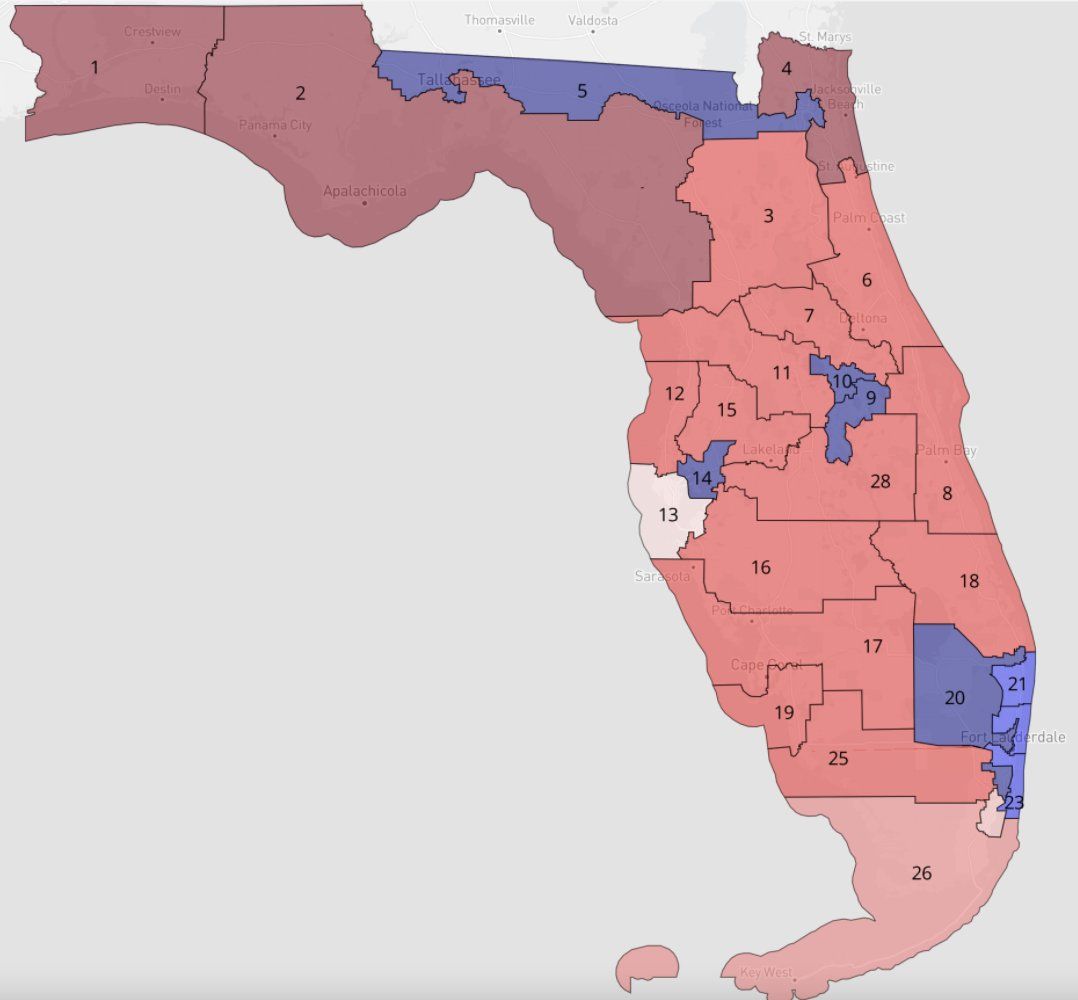 The reason, Wasserman explains, is that “Unlike maps in other large states the GOP controls (TX, GA, OH), the current FL map isn’t already a Republican gerrymander. It was redrawn by courts in 2016 after a more liberal FL Supreme Court struck down the GOP’s 2011 map.”

But the court has swung rightward — and more friendly to Republican efforts to increase their already firm control of the state.

Democrats are already howling that the Republicans are gerrymandering the map (just like Dems do, any chance they get).

But comparing the new map (above) to the old one (below) sure doesn’t look to my eyes like a traditional gerrymander job, with rigged districts snaking all over the map. 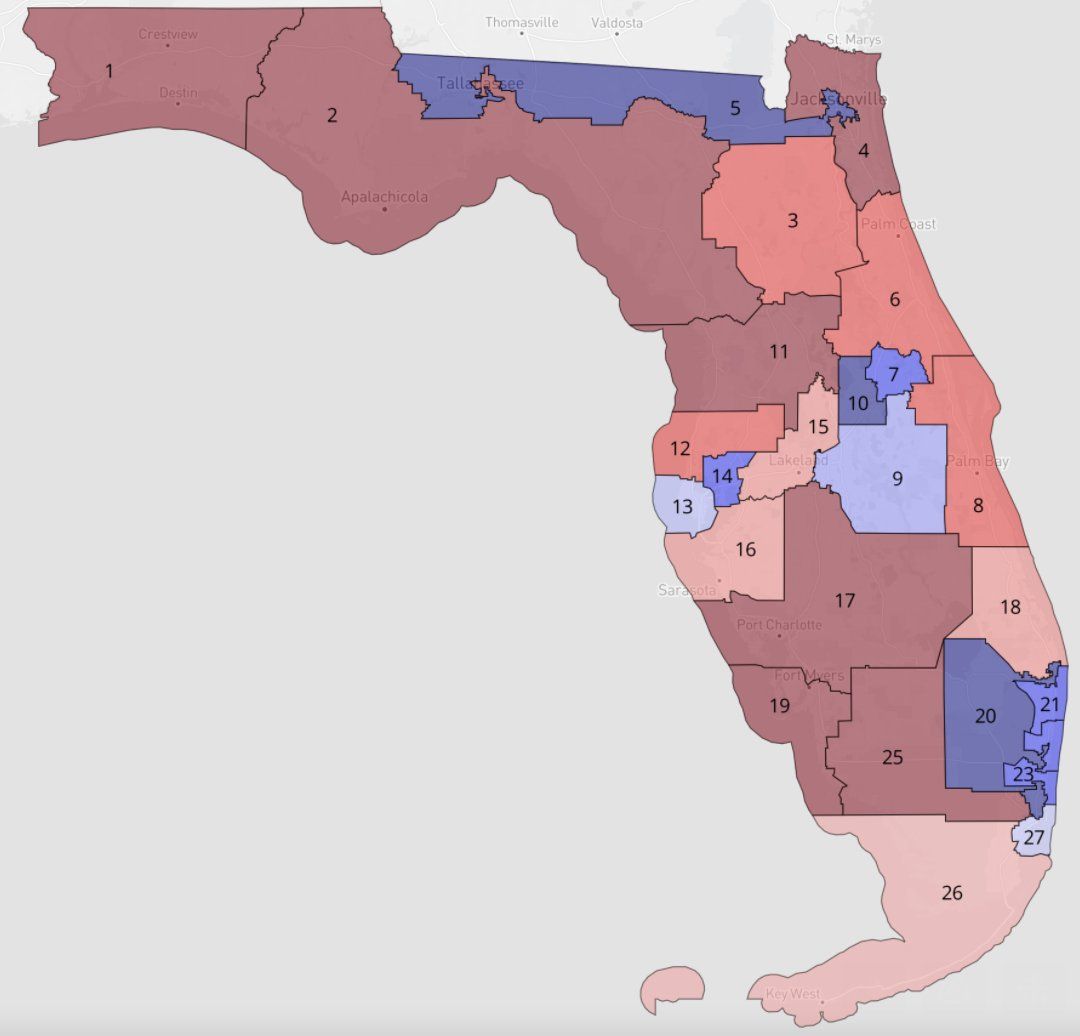 Unlike some states I could mention, Florida Republicans are playing hardball.

If they propose a new map like Wasserman’s — and it seems impossible they won’t — three districts Biden won in 2020 (FL07, FL13, FL27) would be re-shaped to better the state’s conservative majority. 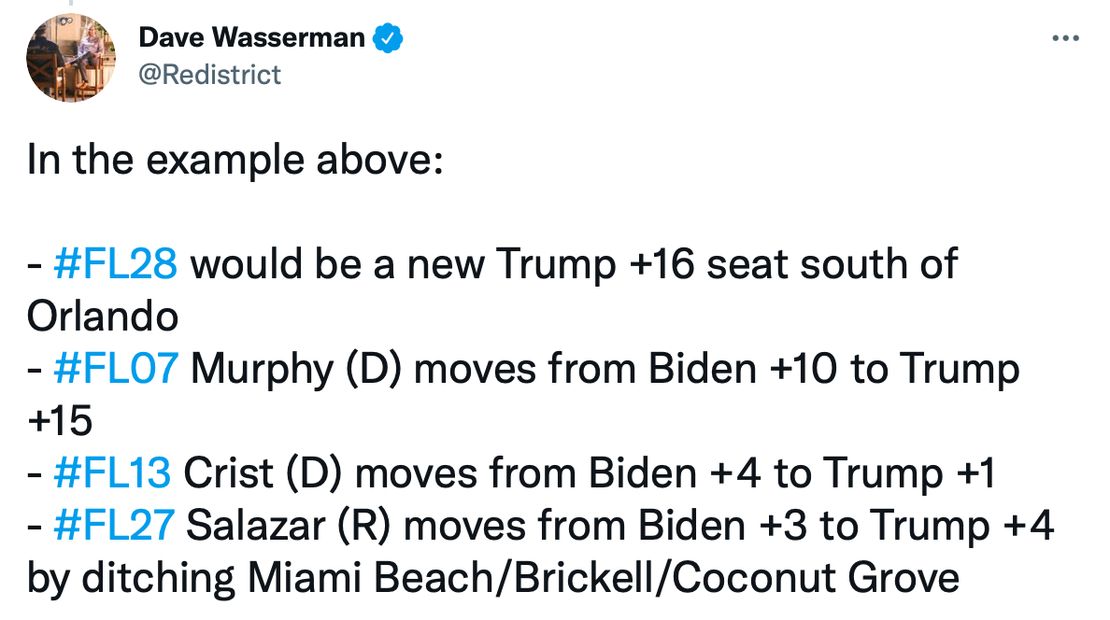 The GOP needs to net just six seats to take that gavel back from House Speaker Nancy Pelosi (D-Money), and a new map much like Wasserman’s could get them five of the six in Florida alone.

Expect Democrats to fight by all means fair and foul, but Florida Man Ron DeSantis’s take-no-prisoners approach doesn’t leave them with much hope.