Congresscritter and social media maven Alexandria Ocasio-Cortez (AOC) says if you beleive in cancel culture then you should be erased from history.

Welcome to today’s Insanity Wrap, brought to you as always by our fine sponsors on the progressive left. Also today I have for you some very scary insanity coming out of the Netherlands, Seattle’s legalized descent into lawlessness, and the funniest video ever — or at least the funniest one this week.

Before we get to that, AOC would like you to know that all those people getting canceled, like the Boeing c-level exec who was forced out for expressing a mainstream opinion in 1987?

The term “cancel culture” comes from entitlement – as though the person complaining has the right to a large, captive audience,& one is a victim if people choose to tune them out.

If you’ve lost your job or your friends or your ability to exercise your First Amendment rights… hell, even if you’ve just silenced yourself in order to play it safe… you haven’t been canceled. Prior to all that, you were exercising your privilege, so anything that might happen to you now is mere criticism.

And if you can’t take the heat, you wuss, then sit down and shut up.

Among the people actually getting canceled, if you ask AOC, are “Palestinian human rights advocates,” abolitionists (???), anticapitalists, and anti-imperialists.

Cities will pay people to write graffiti on the roads about their anti-government, Marxist movement, but they’ll jail you for washing it off.

What we really have is a bunch of thugs and Marxists given free rein by the likes of AOC to silence or even terrorize decent people, while AOC gaslights the victims into believing they’re the aggressors.

Insanity, if you ask me.

AOC’s is just a wider riff on the gawdawful “white fragility” thing, which is a minor variation on — you guessed it — cancel culture.

White fragility was introduced in Robin DiAngelo’s book of the same name, which was a fancy way of telling white people to shut up.

Jesse Lile analyzed the book and its left-wing author in 2019:

The problems with this concept also go much deeper, and we must look to its definition to tease them out. DiAngelo first coined the term in her 2011 article “White Fragility” in the International Journal of Critical Pedagogy. She defines it as:

A state in which even a minimum amount of racial stress becomes intolerable, triggering a range of defensive moves. These moves include the outward display of emotions such as anger, fear, and guilt, and behaviors such as argumentation, silence, and leaving the stress-induced situation. These behaviors, in turn, function to reinstate white racial equilibrium.

I take serious issue with the way this definition is framed because it self-referentially dismisses dissent. According to this definition, if a white person voices any disagreement, such disagreement may be categorized as argumentation (which is assumed to be fueled by anger, fear, guilt). Therefore it is one’s white fragility that causes him or her to disagree.

And so it goes with AOC’s cancel culture denial. Never mind that people are getting fired, shut out of social media, or hounded out of public life for their opinions. If you claim there’s such a thing as cancel culture, you’re just being a wuss, so sit down and shut up.

It always comes down to “sit down and shut up,” because the progressive left cannot and certainly will not brook any dissent. 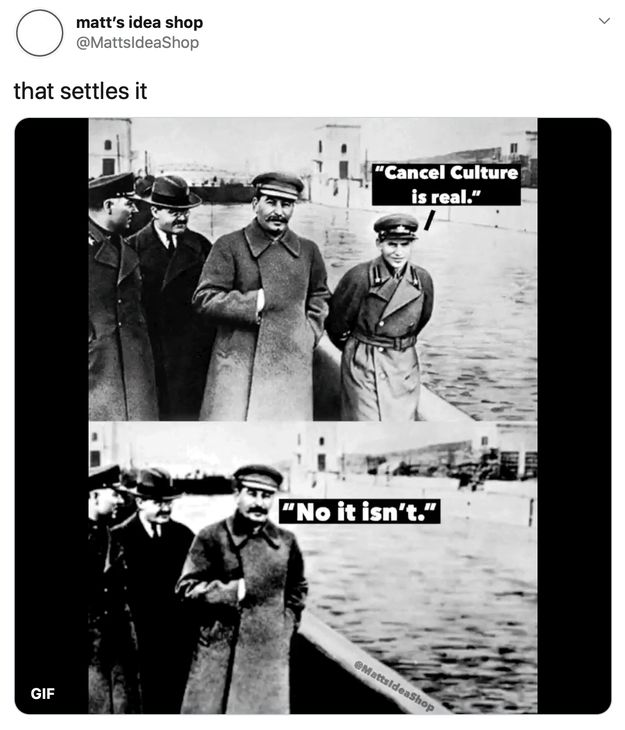 Sorry, but you might never have seen anything like the insanity coming out of the Netherlands this week.

Sex with an unconscious person when no violence is used is 'sexual interaction', not rape.

I AM READY TO FIGHT https://t.co/uzITbyD4P7

Don’t worry, I’m not going to take you on too deep a dive into this one. Just know that I spent enough time using Google Translate this morning that I can confirm that the story is legit.

Maybe AOC would reassure you that women and kids not getting raped are just enjoying excess privilege.

Meanwhile, in Seattle, they’re making the lawlessness more officially official than even the Netherlands would dare.

BREAKING: Veto-proof majority of Seattle city council pledges to defund the police department by at least 50%; one part of the plan they're considering would remove Seattle’s 911 dispatchers from police control – @seattletimes

Here are a few details courtesy of the Seattle Times:

They joined colleagues Tammy Morales, Kshama Sawant, Teresa Mosqueda and M. Lorena González, who previously backed the push to reduce the Police Department’s annual budget by 50% and promised quick action, while Mayor Jenny Durkan has asked the council to slow down.

That means seven of nine council members are on board with the idea, though they have yet to say exactly how they intend to make the cuts; six votes are needed to pass budget-related legislation and to override a mayoral veto. Durkan has not backed a 50% reduction.

The only thing that’s really changed since this story was written is that now the majority to defund Seattle cops is veto-proof.

What do you want to bet some of the money cut from the police will go into private security for the mayor and various councilcritters?

That’s exactly what they did in Minneapolis if you’ll recall.

I promised you something funny, and I’d better deliver after all this intolerable insanity.

This is the best video on the internet right now. I mean it.pic.twitter.com/ZL0jKNtCQE

Come back Monday for another Insanity Wrap… if we make it that long.

Steve launched VodkaPundit on a well-planned whim in 2002, and has been with PJ Media since its launch in 2005. He served as one of the hosts of PJTV, a pioneer in internet broadcasting. He also cohosts "Right Angle" with Bill Whittle and Scott Ott at BillWhittle.com. He lives with his wife and sons in the wooded hills of Monument, Colorado, where he enjoys the occasional adult beverage.
Read more by Stephen Green
Tags: ALEXANDRIA OCASIO-CORTEZ SEATTLE INSANITY WRAP