According to the Associated Press, Americans are the unhappiest they have been in 50 years. I guess this would make everything the media, so-called health experts, and far-left radicals have put the country through in the last four months worth it for Democrats. See how bad the Orange Man is? He’s making you miserable!

Here is the AP’s stunning revelation:

This bold — yet unsurprising — conclusion comes from the COVID Response Tracking Study, conducted by NORC at the University of Chicago. It finds that just 14% of American adults say they’re very happy, down from 31% who said the same in 2018. That year, 23% said they’d often or sometimes felt isolated in recent weeks. Now, 50% say that.

Gee, what could possibly be the cause of half of Americans feeling isolated in recent weeks? Do you think it could be mandatory lockdown and social distancing rules that persist even now in many blue areas?

The funny thing about reporting poll results is what a news outlet chooses to emphasize. It’s a pretty good indicator of the narrative they want to spin. This is certainly the case with the AP interpretation of the study.

This graph is interactive on the AP’s website. And it is true, the navy blue “very happy” line has taken a dive. 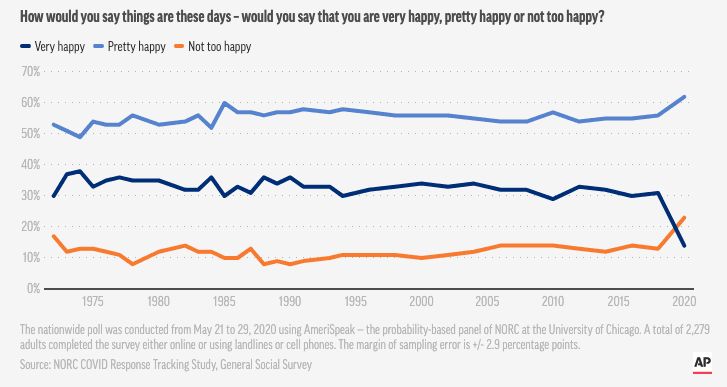 However, the golden “pretty happy” line is two points higher than it has ever been. So overall, 76% of Americans say they are at the happy end of the scale. This could be framed as a demonstration of how resilient Americans are since some other findings indicate people’s moods could be much darker.

Despite COVID-19 shutdowns, only 18% of Americans said their financial situation has gotten worse in the past few years and 80% report being satisfied with their present financial situation. And nearly 50% believe that despite current challenges they and their family have a good chance of improving the standard of living for themselves and their family. Given the economic challenges caused by the pandemic, these are very good numbers.

As a further testament to the toughness Americans have displayed during the pandemic, only 12% report feeling overwhelmed with difficulties they feared they could not overcome. Those who felt a lack of control over important things in their life or did not have confidence in the ability to handle personal challenges were 17% and 13% respectively.

On the measure of the quality of life, 87% rate their own as good or better. According to Gallup, this is only 3% lower than Americans’ satisfaction with their personal lives in early February of this year. At 90%, it bested the previous record of 88%.

The best quote from the Gallup survey:

Roughly 95% of Americans who live in high-income households, who identify as Republicans and who are married say they are satisfied with their personal life — and about three in four among each of these groups are very satisfied.

Meanwhile, adults in low-income households are the least likely to say they are satisfied with their life, followed by Democrats and unmarried adults. Among each of these groups, small majorities report being very satisfied.

Democrats are miserable and want you to be miserable too. So when you see provocative headlines about how Americans feel or what they think, always look at the details. In the NORC study reported by AP, the results are actually pretty positive given the challenges participants report encountering in the recent past.

That is the good news the AP doesn’t want you to know.