The Freedom From Religion Foundation (FFRF), a hate group if there ever was one, is demanding that the IRS investigate a San Antonio, Texas, church where speakers and participants at a “ReAwaken America” event chanted “Let’s go, Brandon,” calling it a violation of the Johnson Amendment.

“They knew what they were doing, what they were saying, and knew it was nothing but a political statement,” FFRF co-president Annie Laurie Gaylor said in a press release. “Tax exemptions are a serious public trust, a responsibility, and with that enormous benefit comes some responsibilities — including not engaging in partisan politics. No church has a right to a tax exemption, they have to follow the rules.”

The event in question, which was held at Cornerstone Church, was organized by someone called Clay Clark as part of a ReAwaken America tour that features Trumpverse luminaries Gen. Mike Flynn, pillow salesman Mike Lindell, and others. 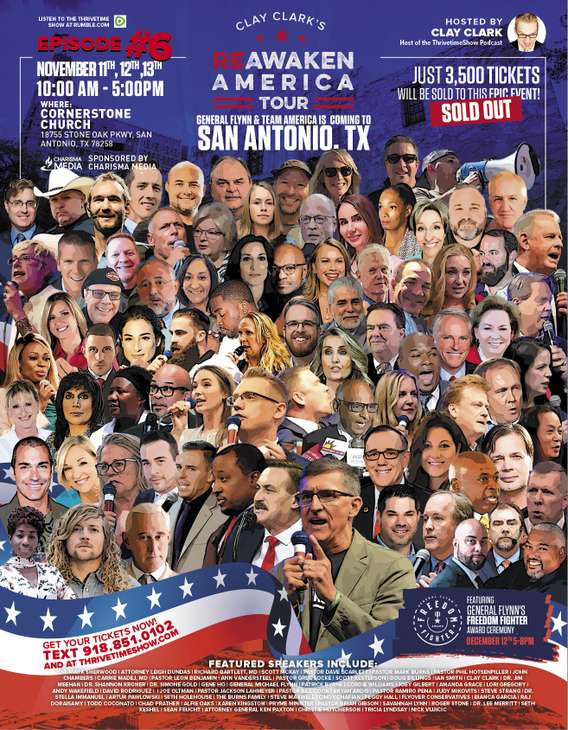 The events, many of which appear to be sold out, are being held at churches across the country.

At the event in San Antonia, one of the speakers led attendees in chanting “Let’s go, Brandon.”

Pastor John Hagee is the founder of Christians United for Israel.

He is a leader among leaders in protecting the Judeo-Christian bedrock of America.

Amazing video of his Cornerstone Church today — worshippers break out in chant of Let’s Go Brandon!pic.twitter.com/HnOSfGWP9D

It should be noted that this was not during a church service, but at an event put on by the outside group.

Before I get to the claims of the FFRF, I’d like to assert a point of personal privilege and say that I don’t like these types of events being held at churches. The purpose of the local church, according to the Bible, is preaching the Word, worshipping God, praying, making disciples, admonishing and teaching believers, practicing the sacraments, and serving and encouraging the body of Christ toward love and good deeds. A political rally, no matter how couched it is in religious language, is not something that falls under the church’s purview. Jesus didn’t seek political power, insisting that his kingdom “is not of this world.” He admonished his followers to pay their taxes and obey the governing authorities.

And it made liberals cry 🤣🤣🤣pic.twitter.com/8eljWKrUGu

The left is freaking out over his calls for a theocracy, which is dumb because Flynn has neither the power nor the influence to accomplish such a thing. The videos circulating are truncated, so I can’t say for certain what the context is. He refers to the book of Matthew prior to his statement, so perhaps he was speaking in eschatological terms about a future time when Jesus returns, Israel recognizes him as Messiah, and the Kingdom of God will be inaugurated on earth. I’m going to give him the benefit of the doubt here.

All the same, the idea of a national religion is an absurd proposition that should be rejected by all Christians. Such a religion—appointed and run by whom?— is anathema to biblical Christianity. Yes, by all means, the expansion of Christianity—the real deal, not the civil-cultural form of it—would be a wonderful thing for America. All Christians should obey Jesus’ Great Commission to become disciples and spread Christianity—not so we can conquer our political enemies but because we love our neighbors and want God to save their souls.

But back to the FFRF. The group is claiming that the “Let’s go, Brandon” chant violates the Johnson Amendment, which prohibits church and other religious groups from “participating in or intervening in any political campaign on behalf of (or in opposition to) any candidate for public office.” Religious leaders are prohibited from making “partisan comments in official organization publications or at official functions of the organization.”

While President Trump did issue an executive order in 2017 dealing with the Johnson Amendment, it fell short of repealing it or taking the teeth out of the rarely-enforced statute:

In particular, the Secretary of the Treasury shall ensure, to the extent permitted by law, that the Department of the Treasury does not take any adverse action against any individual, house of worship, or other religious organization on the basis that such individual or organization speaks or has spoken about moral or political issues from a religious perspective, where speech of similar character has, consistent with law, not ordinarily been treated as participation or intervention in a political campaign on behalf of (or in opposition to) a candidate for public office by the Department of the Treasury. As used in this section, the term “adverse action” means the imposition of any tax or tax penalty; the delay or denial of tax-exempt status; the disallowance of tax deductions for contributions made to entities exempted from taxation under section 501(c)(3) of title 26, United States Code; or any other action that makes unavailable or denies any tax deduction, exemption, credit, or benefit. [Emphasis added]

The amendment itself is absurd on its face, a clear violation of the Constitution’s free-speech and religious protections. The next freedom-loving Congress—if we ever have one again—should repeal it without delay.

To FFRF’s credit, the group has also denounced Democrats who “violate” the Johnson Amendment, recently denouncing Kamala Harris and Terry McAuliffe, both of whom used churches to campaign in the Virginia gubernatorial election. FFRF has called for an IRS investigation into the tax status of those churches as well.

“Can we finally dispense with the idea that churches and Christians are good?” FFRF Co-President Dan Barker said in a statement. “For the past few years they’ve spread lethal disease, exhorted followers not to accept the only known prevention, spread conspiracy theories, fomented insurrection, and now they’re abusing tax-exemptions with political vulgarities. What more will it take to show that religion is not a force for good?”

Like I said. FFRF is a hate group. It hates Christianity and seeks to destroy it. Never mind all the good churches do. A 2016 study estimated the economic value that religious institutions contribute to society to be $1.2 trillion.

The data are clear. Religion is a highly significant sector of the American economy. Religion provides purpose-driven institutional and economic contributions to health, education, social cohesion, social services, media, food and business itself. Perhaps most significantly, religion helps set Americans free to do good by harnessing the power of millions of volunteers from nearly 345,000 diverse congregations present in every corner of the country’s urban and rural landscape.

The FFRF doesn’t say what or whom should replace the contributions to the public good by the millions of Americans who are driven by their faith to love and serve their neighbors. More layers of government programs and bureaucrats, no doubt.